It was once said that the three major administrative problems on a university campus are “sex for the students, athletics for the alumni and parking for the faculty”.

That truism has held true for 60 years, but might just collapse in the next 10 as on-demand, technologically enabled, customer focused, multi-partner, public private collaborations create intricately responsive – and cheap – ways for professors and everyone else to get from A to B.

The concept of mobility as a service (MaaS) is not entirely new, with cities as diverse as Helsinki, Singapore, Toronto and Cascais in Portugal all trialling prototypes that could flag the way cities across the world deal with a combination of negative consequences of travelling in a hyper-urbanised metropolis: congestion, emissions and increased commuting times on an ageing transport infrastructure.

According to Dr Kellie Nuttall, a partner at Deloitte whose areas of expertise include the future of transport, data, AI and automation, MaaS is based on a choreographed collision between big data, personal mobile technology, automation, environmental and energy concerns and new ways of thinking about how people move around our cities.

But what is MaaS?

Nuttall says the simplest way to think about MaaS is along the lines of how we combine different providers and services to kit out our telecommunications needs in our home.

The underlying principle in MaaS is a single overarching platform that is customer-centric; it can evaluate various packages of transport options based on cost and time and a simple payments system.

To understand MaaS, one needs to look at the Finnish capital Helsinki which has ambitious plans to make private car ownership obsolete by 2025.

“Since 2016, Helsinki residents have been able to use an app called Whim to plan and pay for all modes of public and private transportation within the city – be it by train, taxi, bus, car share or bikeshare.

Anyone with the app can enter a destination, select his or her preferred mode of getting there – or in cases where no single mode covers the door-to-door journey, a combination thereof, and go.

Users can either prepay for the service as part of a monthly mobility subscription or pay as they go using a payment linked to the service,” says a 2017 Deloitte report ‘The rise of mobility as a service’.

The city’s officials hope that by 2025, getting around will be so cheap, efficient and appealing, there will be no need for private car ownership.

Europe is doing it, what about Australia?

Nuttall says most jurisdictions in Australia are looking at options for MaaS with some localised trials exploring the feasibility of demand-responsive public buses – smaller variants of the common transit bus that have flexible routes and times depending on demand in real time.

She says one of the fundamental principles of MaaS is that it requires a multi-partner approach so all possible players are included.

“It’s not something that governments should do alone,” she says, adding that collaboration with the ecosystem from as early on as possible must be front of mind as MaaS concepts move toward reality, and that regulation should consider the broad range of intended and potentially unintended consequences of introducing new mobility innovations.

New York City provides a salient example of what happens when the policy ‘cart’ follows the technology-enhanced ‘horse’. Ridesharing in the city has become so widespread, the fallout hasn’t only been a displaced workforce of former taxi drivers, but increased congestion and emissions as people swap the subway system for ride-sharing options.

“If we talk early on about the importance of the ecosystem and bring multiple views to the table, it is easier to predict the unintended consequences because you are looking at it from multiple levels,” Nuttall explains.

“It’s also important that we don’t get overly excited by all these innovations and doing them just because we want to be seen to be modern and contemporary. We have to think about what role they will play beyond the life of the trial and how they integrate into the broader system that is always changing.”

The role of government

Nuttall was the lead author of another Deloitte report, ‘Harnessing the future of mobility’ in which she proposes four key roles for government in the future of urban mobility: strategist, operator, convenor and catalyst; and as the regulator.

Nuttall says all predictions point to the fact that car ownership in Australia will decline as population growth and housing density increases. That said, there are not the same pressures here as in many countries in Asia and Europe. Australians will only give up their cars when the incentives and cost-structures to do so are stronger than the convenience of ownership. That era could be in the not-too-distant future. 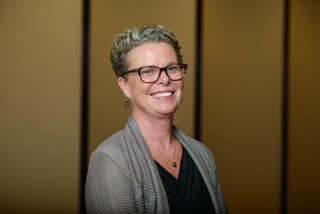