Treasury has released a draft of the new procurement policy that aims to stop federal agencies buying goods and services from companies involved in the black economy.

From July 1, 2019, all new tenders for contracts worth $4 million or more (including GST) will have to include a statement from the Australian Taxation Office confirming the bidder’s tax affairs are in order.

The draft sets out three basic criteria for a satisfactory tax record. Then Treasury will probably raise the bar after the policy has been in place for one year, according to the draft, which is open for consultation until December 21.

First, companies bidding for big contracts must be up-to-date with any registration requirements that apply to them, like having an Australian Business Number, Tax File Number or being registered for GST.

Secondly, the bidder must have lodged at least 90% of their income tax returns, Fringe Benefit Tax returns and Business Activity Statements for the last four years — unless they haven’t been operating that long, or the ATO has already agreed to extensions.

Third, they must not owe the Tax Office $10,000 or more on the day the statement is issued — unless they have already agreed to a payment plan, or the debt is subject to an appeal, objection or review. 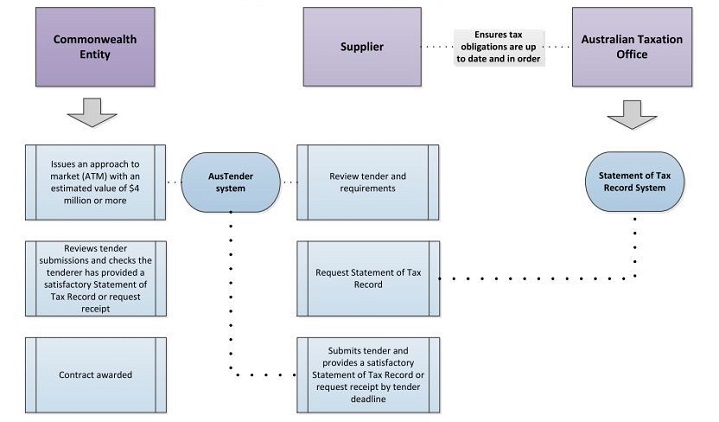 Treasury’s draft says the criteria are limited in the first year “to ensure a smooth transition of the policy” and suggests that from July 2020 onwards, the Tax Office statements might answer a few more questions:

The draft also confirms that later rules might try to exclude advisory firms that help others set up dubious tax-dodging arrangements:

“Similarly, businesses such as tax agents or consulting firms that provide tax advisory services to their clients may be required to provide details of their services and confirm that they are not involved in promotion of tax schemes that are not reasonably arguable.”

The department’s Black Economy Taskforce recommended the new requirements because government agencies can’t simply access a potential supplier’s tax record, and moreover, it thought companies that save money by avoiding tax would be more likely to win government contracts by undercutting their more honest competitors.

As noted in a discussion paper earlier in the year, the ATO cannot simply share this information with other agencies under current legislation, so the simpler option is a new addition to the list of procurement-connected policies that forces the would-be suppliers to get this information themselves and provide it with their bid.

Assistant Treasurer Stuart Robert said the government was “leading by example” in a statement yesterday. Treasury’s draft policy guidelines explain this rationale further: “The Government has the opportunity to demonstrate best practice… This will set an example for private sector firms for their own supply chain management practices.”