Attorney-General Christian Porter’s initial rejection of the cross-bench National Integrity Commission bill this week helps prove the reverse of the point he hoped to make: it is a strong and workable solution to multiple and growing weaknesses in our federal integrity system.

This week has also revealed the extent of weaknesses in the Commonwealth’s existing law enforcement-based anti-corruption system — if you can call it a system.

Monday’s Sydney Morning Herald showed how corrupt conduct by federal officials, linked to serious criminal conspiracies, is going under-investigated and allowed to be swept under the carpet.

And yesterday, finally, the lifting of suppression orders on our biggest 10-year foreign bribery case against the Commonwealth’s Reserve Bank-owned companies, Securency and Note Printing Australia, brought even more shocks.

With criminal convictions and guilty pleas now revealed, we know not only how federal government companies themselves engaged in corruption – but also that two weeks ago, the High Court threw out four of these prosecutions due to gross incompetence in how the Australian Federal Police handled the cases.

ABC journos have nothing to fear…

On Monday, Attorney-General Christian Porter was right when he said the system could use improvement. And he gave welcome indications that the government itself may propose some kind of reform, a fact rather buried until now. But is that fast becoming a case of not only too late, but too little?

The level of inaccuracy in the government’s response to the National Integrity Commission Bill 2018 introduced on Monday by the Member for Indi, Cathy McGowan, does not auger well.

The Attorney-General’s first attack on the bill was the far-fetched claim that a “dishonest or partial exercise of official functions” – one element defining the Commission’s jurisdiction – could extend to alleged bias in political reporting by SBS or ABC journalists such as political editor Andrew Probyn.

But if this was an attempt to scaremonger amongst the media, it backfired. In fact, the phrase is part of established statutory definitions of corrupt conduct across Australia, not just in New South Wales but in other states including Queensland.

When applied by agencies and tested in court, it has never been interpreted that way by anyone else, nor is it ever likely to be. If necessary, it would be easy to clarify by way of amendment.

… And public servants are safe, too

Even more worrying was Porter’s claim that the bill would be used to target innocent, hardworking public servants who were just doing their job.

According to the Attorney-General, the bill meant “any public servant… who did anything that, it could be argued, impaired confidence in the administration of the Commonwealth” might be investigated for corruption, even for “a very minor civil offence or something that could attach some form of disciplinary proceedings to it… as low as an administrative irregularity.”

This claim refers to section 9(3) of the proposed legislation, but anyone who reads the bill will see that is not what it says. On the contrary, the proposed commission’s jurisdiction would only be triggered by conduct which “impairs public confidence in Commonwealth public administration” and where this is also a serious criminal offence, such as defined by Part IAB of the Crimes Act 1914. 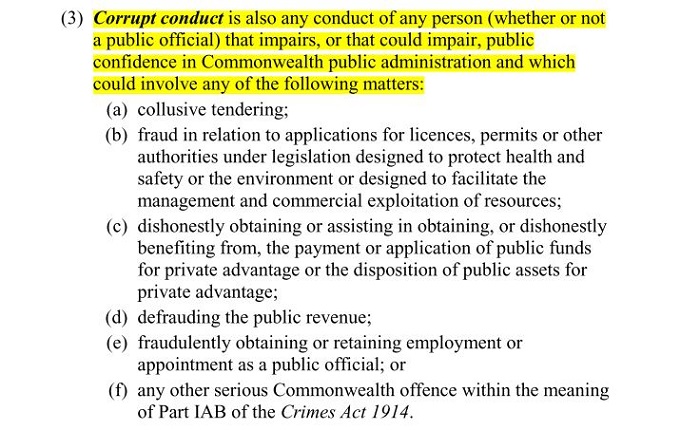 In fact, this subsection was based on one drafted by former Chief Justice of Australia, Murray Gleeson AC QC, and Australia’s most serious anti-corruption lawyer, Bruce McClintock SC, which is also included in state legislation – again, not just in NSW, but also Queensland – after long debates over the proper scope of such an anti-corruption body.

Despite his painting of the bill as an attempt to “transplant the New South Wales ICAC into the federal sphere”, that is not what it does.

Its investigative powers are in fact based on those of the Commonwealth’s own existing Australian Commission for Law Enforcement Integrity, as well as other federal regulatory bodies – combined with other lessons from across Australia, and internationally.

And after long analysis of the Commonwealth’s own integrity gaps, it includes many things that no state legislation does – including a new framework for corruption prevention, federal and state coordination on a national anti-corruption plan, and a new one-stop shop for serious wrongdoing including a long overdue strengthening of whistleblower protection arrangements.

Journalists and public servants are safe.

A disappointing foray into a necessary debate

We were always going to have this debate.

In doing so, it is important to reinforce the valid point that such measures must be balanced and have appropriate safeguards, and to ensure this balance is found. But to descend to this level of factual and legal inaccuracy does little to inspire confidence in the government’s own planned response.

The real debate here is whether the Commonwealth adopts yet another piecemeal reform in response to its anti-corruption problems, or takes a strategic approach in which the major gaps in the system are actually addressed.

In particular, the limited, existing law-enforcement response to the difficulties of stemming corruption, and promoting integrity, has already been shown by national experience to promise abject failure. Simply extending that won’t help.

The advantage of the current National Integrity Commission Bill is to show the more serious ways our nation can build on difficult lessons, and chart a new, more positive course.

On the bright side, the government is using these final weeks of Parliament to push through much-needed reforms to corporate law penalties, and also to private sector whistleblower protections. These steps are truly historic, and show that even if hard-learned, the government’s lessons on integrity can really pay off for the nation.

But governments always find it easier to impose regulation on everyone but themselves. Now is the time for our parliamentarians to restore trust, by showing they are prepared to accept the kind of accountability they continually demand from others.

By A J Brown

A J Brown is professor of public policy and law, and program leader of public integrity and anti-corruption, in the Centre for Governance and Public Policy at Griffith University. He's a former senior investigator for the Commonwealth Ombudsman, associate to Justice Tony Fitzgerald AC QC, ministerial advisor and current member of the board of Transparency International Australia.

By A J Brown