When policy problems are complex, we need to understand and learn from the front line. Nicholas Gruen explains ways to improve the early, middle and late stages of institutional learning and change-making, to enable successful policy development.

I can feel the announceables coming on; indeed whole focus groups of them.

Pilots make an easy announceable. They’re cheap, they sound innovative and they’ll be conveniently off the books by the time some new announceables are needed. Pilots are to policy what start-ups are to innovation: cheap, worthwhile and almost invariably around for a short time before they’re replaced by new ones. And most of them are unsuccessful.

Innovation policy has a name for the problem. It’s called the Valley of Death, and refers to all those byways and traps that must be navigated before the Good Idea can make it into a successful product. A similar valley of death bedevils innovation in government.

And while these problems are frustrating in markets, at least markets are an open system capable of being disrupted (as we say now) by competitors with enough nous and other resources to do so.

Innovators in government face a similar thicket of obstacles, but in a centrally planned system, it can be virtually impossible to get through — because if you’re a small new initiative, you’ve got few champions fighting for you, and plenty of people within the system to whom you’re an inconvenience or worse.

Through thick and thin: Improving policy in Australia’s regions

These things came to mind as Lateral Economics was working on a report to the Regional Australia Institute, Through thick and thin: Improving policy in Australia’s regions. Yet just as Australia has managed some commercial start-up successes, a few Atlassians and Seeks, so too there are a few government innovations that have scaled — although only one in regional policy.

Not only does this prove that it’s possible, it helps us understand how such success might be replicated.

At least during the reform glory days from 1983 to 2001, Australia excelled at top-down economic policy reform. This included the setting of tax and benefit levels (whereby Australia has the most targeted welfare system in the world) and adapting existing infrastructure like the tax and benefits system in new ways, as we did with HECS and the Child Support Agency.

Scrapping stuff that probably never made economic sense — like tariffs, shopping hours and the two-airline policy — was also something we led the world in. However beyond this, we’re coming to realise (aren’t we?) that even back in the glory days we weren’t so flash where problems are complex.

When problems are complex, we need to understand and learn from what’s happening on the ground.

Adapting language from anthropology, we call the former policy problem, which is amenable to top-down reform, ‘thin’, and the latter, more complex problem, ‘thick’.

Whereas thin problems can be effectively designed and managed from the top, for thick problems, institutional learning must travel up the chain of command as well as down — from the outfield to the centre and also in the other direction.

However, there are profound institutional and cultural obstacles preventing this from occurring, and where it does occur, preventing it from being embedded or properly institutionalised.

The greater status given to policy-making compared with delivery is a central obstacle to achieving what must be achieved if small-scale variations and experiments in the field are to be learned from — which is to say:

In our report, we anatomised these inadequacies in terms of the early, middle and late stages of the necessary process of institutional learning and change-making — which we summarised using a rhyming triplet: Will — Skill — Fulfil

We found deficiencies of practice in each of these stages: 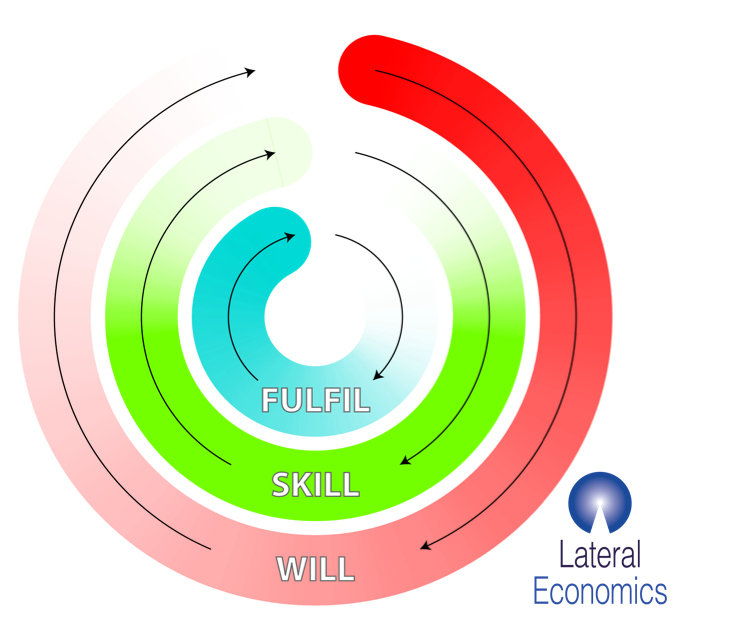 Will: Governments frequently announce their intention to introduce some new policy or approach. Then, poor attention to detail often follows and the initiative quietly dies. Sometimes little progress is made beyond announcement or some stated intention. On other occasions, a pilot proceeds and appears successful but is not continued further as priorities change.

Skill: Pilots, trials and other small-scale initiatives are often used to develop new skills and investigate the value of various new approaches. Some pilots have trialled integration of service delivery and funding streams between agencies — one of the holy grails in ‘joined-up government’ — but this has been very rare. More disconcertingly, the scaling of such learning into larger programs with learning feeding back to agencies has been rarer again.

Fulfil: For innovation to be truly ‘fulfilled’ in our lexicon, it needs to be grown to the appropriate size and to become incumbent — embedded within organisational and political expectations and business-as-usual.

We can think of only one example where this has occurred for regional Australia: Landcare.

Landcare was a highly successful initiative in which a range of success factors coalesced:

Partly because of a political culture that valorises announceables, pilots and small-scale policy innovations are relatively easily established, but then tend to disappear, often irrespective of their merits, to be replaced by new announceables, many of which are also pilots.

The need for accountability: some recommendations

Governments urgently need to establish greater accountability for the extent to which the system as a whole supports a healthy process by which trials, pilot programs or just variations within existing programs are widely learned from and grown in scale and impact where appropriate.

In light of this we offered the following recommendations:

This article has been adapted from a report commissioned by the Regional Australia Institute. RAI’s Regions Rising Conference will be held in Canberra on April 4-5.