The government has broadly kept to the restrained growth of the public sector seen in the budgets of recent years. But the Nationals leadership think there’s still room for government jobs to decentralise.

In 2019-2020 the budgeted Average Staffing Level of the Australian Public Service will rise by 1272, less than 1% of the roughly 166,000 federal civilian workforce that the Coalition government has maintained in office.

Finance Minister Mathias Cormann says the government’s careful management of resources has allowed it to be agile in directing talent towards areas of emerging need.

The departments and agencies that will see the biggest boost to employee numbers, not including contractors, are:

Four departments look set to shrink in 2019-2020 based on their allocated average staffing level:

One graph that has become a staple of the budget documents in recent years compares the departmental expenses as a percentage of total government expenses and ASL as a proportion of the Australian population.

Cormann notes that the overall cost of government administration, including consultants, continues to fall as a proportion of total government expenses — excluding the NDIS and military.

Staffing levels for the general government sector has been stable even as the Australian population and demand for government services continues to grow. 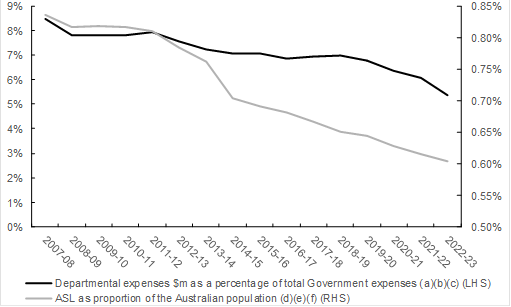 The epilogue of the decentralisation agenda?

The Nationals leadership team of Michael McCormack and Bridget McKenzie shared responsibility for authoring the regional ‘blue book’ in the 2019-2020 budget papers. A large emphasis of their foreward is celebrating the achievements of the decentraliastion agenda.

The pair claim this budget will establish or move 191 positions to the regions, including:

Other agencies moving home, but not factored in this budget:

There will be more, as the government continues to work with portfolio agencies to build on the existing relocations. Infrastructure Minister McCormack and Regional Services Minister McKenzie state:

“Going forward, the government’s continued commitment to identifying decentralisation opportunities is supported by improvements to digital connectivity, helping agencies to connect regardless of location.”