The exploding popularity of e-scooters could reshape mobility in our cities. Regulators need to adapt their approaches to handle the innovation rather than ban it altogether.

E-scooter mania is sweeping cities around the world. Fun, accessible and cheap to rent, shared electric scooters are one of the biggest technology stories this year.

Their main appeal is that they are so easy to ride. A flood of startups offer on-demand services. Simply download an app, scan the barcode, ride and drop at your destination.

While this is a simple idea, it has caused a few problems.

When they reach their destinations, riders leave them and walk away. The scooters, like dockless share bikes before them, end up cluttering pavements, cause friction with pedestrians and provoke controversy and debate.

E-scooters are the future of city transport and will reduce private car use, say the enthusiasts. They will ease congestion and help cities achieve their environmental and road safety targets, according to the optimists.

But for every supporter of these e-boosted contraptions, a dissenting voice says they are annoying and dangerous. Critics argue that e-scooters litter our footpaths, menace pedestrians and cause crashes and injuries. One group in San Diego has even filed a law suit claiming that scooters discriminate against people with disabilities.

Some cities have banned e-scooters. In Australia, Brisbane City Council, while extending a trial of e-scooters operated by Lime, has warned safety must be improved before a permanent permit is granted.

The emergence of “tiny vehicles” includes not only e-scooters, but also e-bikes and other electric, low-speed, micromobility solutions.

If we take them seriously, these could be a huge deal for our cities. These emerging modes of transport can be quite effective for “first and last kilometre” travel (e.g. between home and your nearest train station). They can also help with short commuting distances less than 10 kilometres. An estimated 20% of trips from home to work in capital cities are 5-10km long.

E-scooters could be “disruptive” in that they would cut the number of short trips taken by private vehicles today.

In Sydney, around 67% of these short commuting trips (on average) involve private vehicles. The proportions are even higher in Melbourne (76%), Brisbane and Darwin (both 80%), Canberra and Perth (both 83%), and Adelaide and Hobart (both 84%). Across the nation, more than 85% of drivers who commute by private car don’t share with other commuters.

Shifting even a small percentage of these trips would help reduce reliance on cars, ease congestion and improve amenity.

Most commuters do not carry much on their journey to work – a purse, a backpack or similar. That makes tiny vehicles more appealing for the short commute because they do just the one thing: provide personal mobility from A to B. Leather seats and posh interiors are not an option! 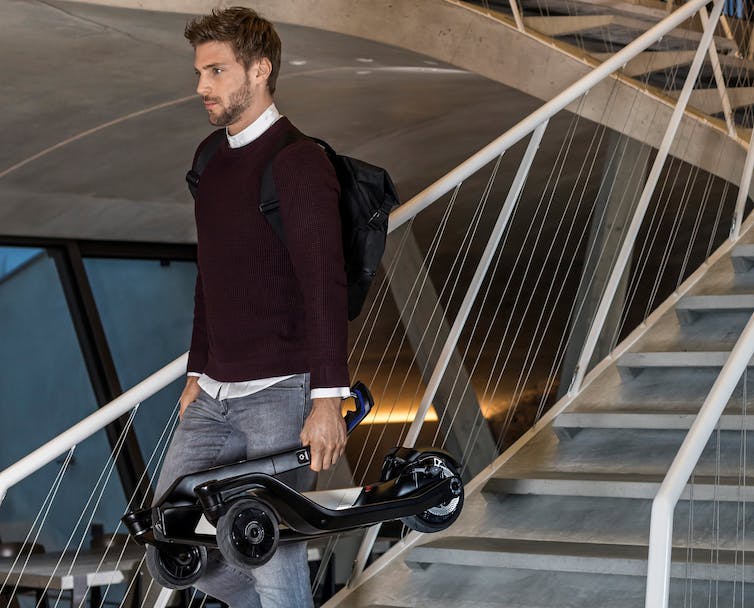 E-scooters can help with first and last kilometre travel and short commuting trips.

Clearly, we are nowhere near mass adoption. That would require more variety of tiny vehicles to suit all types of people, trips and weather conditions.

Nevertheless, there is no shortage of ideas to solve these challenges. Many solutions will undoubtedly be imagined. Some might actually work!

Regulation remains a major hurdle. Policymakers recognise that micromobility could be a driving force of change for our cities, but safety cannot be an afterthought. Instead of banning the emerging technology, many cities are adapting their approaches to handle it.

Rather than making up new rules without evidence, policymakers are using a regulatory sandbox approach. Borrowed from fintech regulation, this approach allows startups to test new technologies for a specified period.

Businesses can learn quickly and respond to problems as they arise. Regulators can collect data to make informed decisions and prioritise interventions.

We already have examples of these partnerships.

Companies are offering to pay cities a fee per scooter to build protected scooter and bike infrastructure. Others have committed to providing financial incentives to encourage riders to park scooters properly. One company is offering a free ride to customers who park their scooters well ten times in a row.

To keep footpaths safe, businesses are also working with local governments to test ideas such as retractable locks, solar-powered parking, designated on-street drop-off zones – even a “dock for dockless” solution!

What’s next for the e-scooter market?

These products are not toys and investors know it. Venture capitalists are riding a wave of public acceptance and adoption.

E-scooter growth, in particular, has exceeded first-year adoption rates for similar services such as bike-sharing and ride-hailing. In Sacramento, where the same company offers both bike and car services, the use of shared e-bikes exceeded ride-hailing rentals by a 53-47% margin.

Businesses are betting that shared e-scooters will do to short-distance travel what ride-hailing did to the taxi industry. Globally, investors have poured more than US$5.7 billion into micromobility startups since 2015. New business models are emerging, with some companies considering annual memberships that include free ride time per day.

As with other fast-moving innovations, policymakers need to adapt their approaches. They also need to rethink bans and regulations that undermine the viability of e-scooters.

Tech companies need to prioritise rider safety over growth. They need to work with governments to preserve the sanctity of the footpath as a safe public space.

Without this, our cities will miss out on the potential of tiny vehicles and the opportunities they offer to reduce private car use.