After an unexpected result in Saturday’s federal election, members of the Australian Public Service have a good idea of what to expect going forward.

Caretaker period will end soon as Scott Morrison is now set to lead a new government with a slim majority in the House of Representatives, and the Coalition will continue calling the shots for the APS.

Departments will have to keep working out how to trim 2% from their annual operating costs. They will continue working within the Coalition’s principle that no Australian government needs more public servants than the last one led by John Howard, in 2007, with a large supplementary workforce drawn from the private sector.

And the main message of the APS enterprise bargaining policy will continue to be: take what you’re given.

There will have to be a ministerial re-shuffle to replace former ministers who did not stand for re-election such as Michael Keenan, Nigel Scullion, Christopher Pyne and Kelly O’Dwyer. These leave vacancies in the portfolios of Human Services, Digital Transformation, Defence, Indigenous Affairs, and Jobs and Small Business.

The ABC’s results projection showed a few seats in both houses still in doubt at time of writing, but it’s clearly a narrow victory for the Coalition, leaving open the possibility of parliamentary instability if any by-elections are needed in the future.

In terms of policy, parliamentary budget officer Jenny Wilkinson has been keeping track of election commitments. For the Coalition, this means about $1.4 billion worth of new spending over four years, paid for by about $1.5 billion worth of efficiency dividends.

As we reported on Friday, a few more small agencies will be spared the budget squeeze.

Apart from the Greens, the Senate cross-bench will be smaller in the new parliament and lean generally towards the Coalition’s political ideology, possibly making it easier for Morrison to pass legislation. In the lower house, several independent and minor-party MPs are also more likely to agree with the government than Labor and the Greens.

The PM now has a strengthened position within the Coalition’s joint party room, after a win that caught most commentators and observers by surprise.

Traditional methods of pre-election polling and exit polling have again proven unreliable although the long run of media polls predicting a narrow Labor win were also interpreted somewhat bravely. Given the margins of error and well-known challenges for pollsters these days, a more cautious analysis would have simply said the parties were neck and neck for years, with a tiny apparent advantage to Labor that could easily turn out to be statistical noise.

News reporters and commentators, however, are reluctant to just say it’s a close race and leave it at that. It appears that newer approaches like advanced analysis of social media data can be more effective in the right hands; Griffith University professor and big-data expert Bela Stantic called it correctly and has chalked up some other impressive results.

Social media provided higher accuracy than all polls and all bookies, my Big Data analytics clearly indicated that @ScottMorrisonMP will hold on to power, to the extent to correctly predict results in all states. @Griffith_Uni , @GU_Sciences , https://t.co/emHu0NmqEM

Meltwater, a company that analyses social media and online news, finds climate change was the biggest topic of conversation during the campaign and over the weekend, and continues to be the big issue. A lot of people were talking about tax in the lead-up to the election but these discussions are already dying down.

More was written about climate change than tax in the news media and on social sites, with employment the third biggest topic of discussion for both, followed by immigration, education and infrastructure. Welfare stands out as an issue discussed more on social media than in the news. 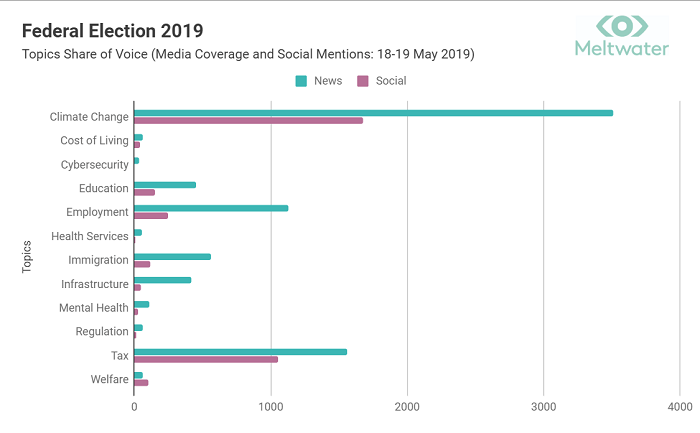 The Morrison government will now presumably move ahead with legislation to establish the Commonwealth Integrity Commission as proposed, although this is one area where it might find cross-bench senators want a stronger anti-corruption body put in place.

The Department of Agriculture and Water Resources will not be subject to a royal commission-style inquiry into a controversial purchase of agricultural water rights, as proposed by Labor, although the auditor-general and the Australian Competition and Consumer Commission will both run reviews of related matters within their respective limitations.

One Nation voters are very strong supporters of an anti-corruption commission with the full range of strong public inquiry powers, as are most people across the spectrum, according to one recent survey. The Centre Alliance is also quite keen on public sector integrity reform and will have two continuing senators as well as MP Rebekha Sharkie, who saw off a challenge from Liberal candidate Georgina Downer to retain the South Australian seat of Mayo.

Sharkie has promised to re-introduce a bill proposing a much stronger integrity commission, much like the bill introduced last year by former independent MP Cathy McGowan.

“My Bill would seek to set up a Federal ICAC (Independent Commission Against Corruption) that actually does the job it sets out to do, not the watered down version put forward by the Coalition after pressure was applied by Cathy, myself and the rest of the crossbench,” she said last week.

“My proposed ICAC would be adequately resourced and it would have the power to self-initiate investigations into corruption without a Government Minister playing gatekeeper. An agency like this would have been able to look at matters such as the Murray Darling Watergate scandal and how Paladin Security could be handed a $423 million contract to run the detention centre on Manus Island under a restricted tender process.

“My Bill would also seek to establish an agency that could hold public hearings if the Commissioner felt it would be in the public interest.”