The Public Sector Innovation Network’s favourite month of the year has arrived, and the group has given itself a makeover in time for this year’s events for public servants, which are mostly in Canberra but with a few in Brisbane and one in Perth.

Gatherings on the Innovation Month official calendar include an afternoon all about learning from failure, with the first Australian Public Service F@#kup Night being hosted by the Department of Industry, Innovation and Science on July 25.

Attendees are promised “an afternoon of open and honest stories of the lessons learned from failure, told by three senior executives from the federal government” along with drinks and nibbles. This tantalising offer is only for government staff.

Running these events is now a service provided by a start-up that isn’t so shy about the name and essentially promises it has a formula for a fun night that can still be called professional development. Janna McCann, the head of the department’s innovation unit BizLab, enthused about the concept earlier this year at the Public Sector Innovation Show conference.

“If we try new things, we will fail,” said DIIS deputy secretary Elizabeth Kelly, speaking at the Innovation Month launch this week, hosted by the Institute of Public Administration Australia at the Australian National University.

“Failing must not be feared. Whilst failing is not the objective, without failures we won’t learn.”

She said the “f-up night” would be a chance to “exchange lessons in a really frank environment and learn valuable lessons from the failures in an informal setting” while highlighting some other possible outings for public service innovation enthusiasts like the Byte-sized Digital Summit hosted by the Digital Transformation Agency, and the presentation of this year’s Innovation Awards at the end of the month (see finalists below).

Kelly also unveiled the innovation staff network’s new yellow, grey and orange branding, with the name Spark, graphic design elements, and ideas about its strategy and service offer. Atop the phrase”Igniting possibilities” sits a mission statement:

“Our network inspires creative thinking to tackle modern day problems facing government. We empower members to accelerate change by providing the right knowledge, connections, and a space to learn from one another.”

The network, which is hosted by DIIS, has been rethinking its purpose.

“We’ve recently conducted a human-centred experiment on ourselves, on the PSIN, asking members and others how it could add more value and have greater impact,” Kelly explained. “So, we applied the medicine to ourselves, which I think speaks volumes for us. The result is a co-created proposed new identity and service offer.”

In line with this year’s Innovation Month theme — try, test, learn, deliver — this was not presented as the final product. It’s in the beta-testing phase, much like the DTA’s digital summit is described as a “public beta” as well, because it’s the first one.

Thanks for having us along to your #innovation Great SES Debate @HumanServices as part of #innovationmonth. It was an hour of fast facts, laughs, thought starters and even a Flinstones/Jestsons methaphor. We loved it! #PSInnovate pic.twitter.com/aeHwHdUIlL

“Experiments can test our understanding, test our evidence, test our theories, hunches and our research,” Kelly said in her speech.

“Experiments take ideas and turn them into practice. experimentation can give us the confidence to deliver policies and services that have been rigorously tested and adjusted to meet the needs of users. Experiments allow us to try something new, fail small and fast, learn how to improve and adapt, and pivot, and ultimately deliver the best possible outcomes.”

Innovation Month also started as an experiment by two staff of the Agriculture department, she noted.

“It’s grown into a key event in the annual public sector calendar. Experimentation is a key part of public sector innovation, with innovation teams like the Digital Transformation Agency’s govX, design teams at the Tax Office, my own department’s BizLab, consistently running trials of policy and program solutions as part of their processes.”

Finalists in this year’s Public Sector Innovation Awards were announced in mid-June. Next, each team will pitch their idea to the judges, after receiving some pitch training through the Canberra Innovation Network (which incidentally just appointed experienced IT industry executive Hala Batainah as its new chair after her nomination by the territory’s Chief Minister Andrew Barr).

In the “citizen-centred innovation” category of this year’s awards, we find:

Innovations that go towards improving culture and capability include:

In the “digital and data” category, the four finalists are: 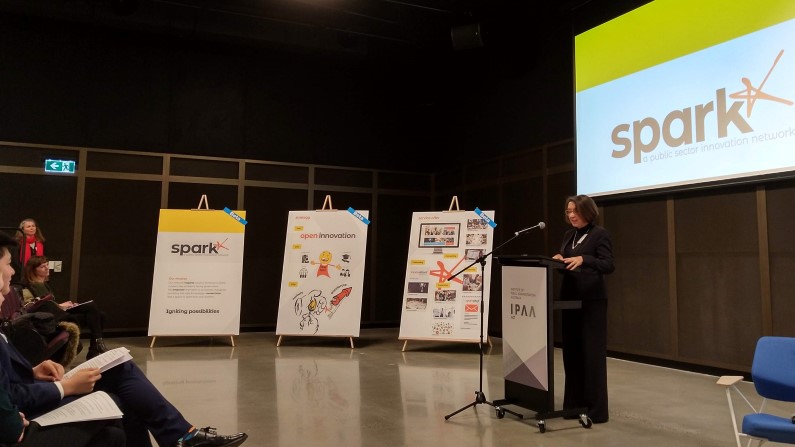 In her speech Kelly listed some key points from an ANZSOG research paper, Governing by looking back, one of several commissioned by the APS Review.

“The report identified six key activities which need to be both funded and committed to by the public service if it’s to become a learning institution.

The innovation-focused deputy secretary acknowledged it was a “tough list” of recommendations and her department wasn’t there yet, but also noted it encouraged learning from day-to-day work, not from courses, and the ongoing task of connecting policy development to the lessons of delivery.

“I’m not sure how many of you come from departments where this resonates but in my department, we find it really hard to inform the policy stream by the work of our programs. There’s a divide between the two that is incredibly hard to bridge. We’re working really hard to do that and to actually understand that the interactions, the manifestations … and the impacts of our programs every day, are the most valuable learning that we have available to our policy development process.”

As well as learning, the public service must also be listening, she added.

“It’s important for us as public servants to show the public we serve that we are listening, and by being honest and open about the experiments that we’re doing, by bringing the public with us… then we can build trust.”