We’d be very grateful if any comments or submissions you’d like to make regarding this blog post OR ANY OTHER INPUT TO OUR WORK on valuing the Census project are provided by 5pm Monday 29 July.

The Western Australian Local Government Area (LGA) of Stirling, north of Perth, had almost 8,000 fewer people than it expected to have in 2016, following revisions to population estimates as a result of the 2016 Census.

Prior to the rebasing of population estimates due to the 2016 Census, the 2016 estimated resident population (ERP) of Stirling was 228,036, but it turned out to have an ERP of 220,073 after the Census allowed a more accurate estimate to be made. That’s a downward revision of 3.5%.

Many other LGAs would have discovered they either had several thousand more or fewer residents in 2016 than they would have expected (based on ERP estimates between Census years, which are compiled using available administrative data on births, deaths, overseas migration data from the Department of Home Affairs, and interstate migration from Medicare enrolments).

For example, the North Queensland LGA of Townsville had 4,566 fewer people than expected, while the Sydney City LGA had 11,786 additional people.

Figure 1 shows the upward and downward LGA revisions due to Census rebasing.

Imagine how difficult it would be for local government decisionmakers if they were unable to obtain accurate estimates of their local area populations. To some extent, they could use their rates data to help formulate their own estimates, but rates data are imperfect as they do not tell the council how many people are living in different dwellings.

The five-yearly Census allows for calibration (or rebasing) of ERP figures. The Census does not provide perfect estimates, as the response rate is around 95% across Australia and the ABS needs to impute data to provide estimates for the whole Australian population. However, we can be reasonably confident the Census enables the ABS to produce better population estimates for the nation, states, regions, and small areas than would otherwise be available.

One of the advantages of the Census process comes from field officers identifying new dwellings that may not be on the ABS Address Register and ascertaining whether dwellings are likely to be occupied. This fieldwork provides the ABS with important information it can use to produce more accurate population estimates.

Rebasing the ERP to the latest Census means that errors do not end up perpetuating and growing larger, with adverse implications for the allocation of funding and infrastructure. Considering that the three levels of government in Australia spent $647 billion in 2017-18, or approximately $25,900 per Australian, the importance of having accurate data to inform the allocation of such a large amount of government funding is apparent. That being said, not all government spending requires information about our population.

Upward and downward revisions in ERP can be substantial for other small areas, too, as our analysis of revisions to estimates for ABS Statistical Area Level 2 (SA2) regions has revealed. For example, consider the large upward revisions of 4,734 people in Melbourne CBD and 3,486 in Craigieburn-Mickleham in Melbourne’s northern suburbs (Figure 2). 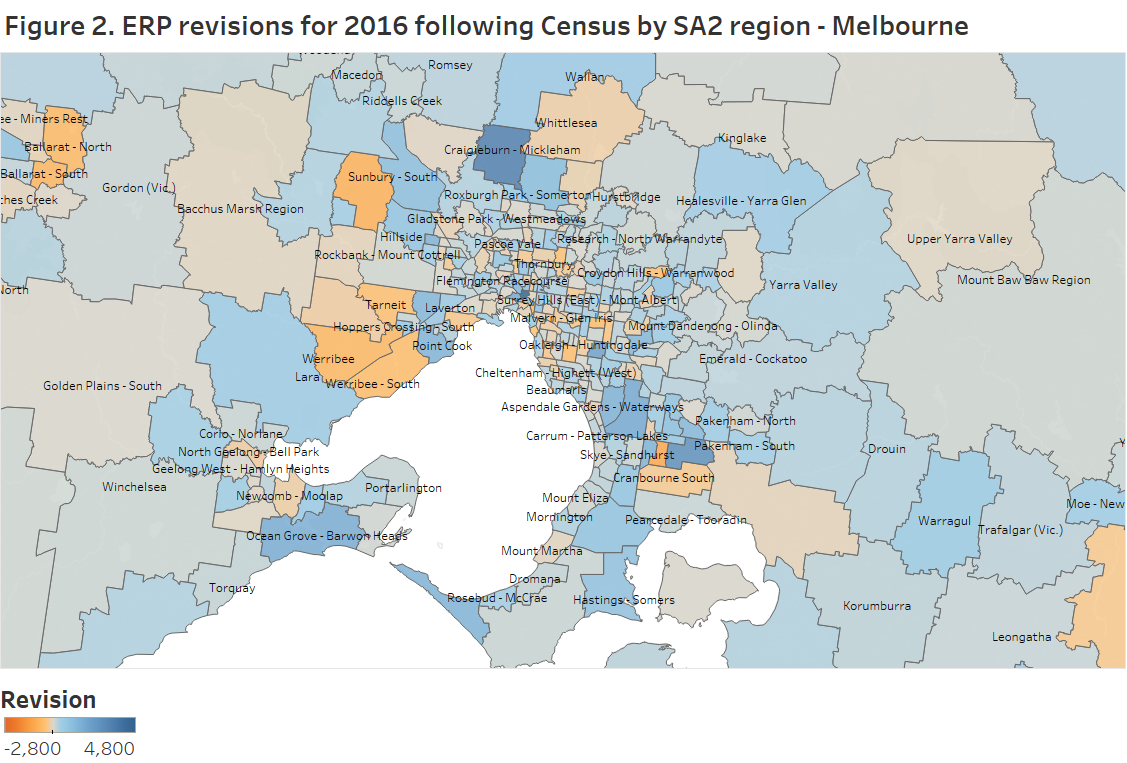 Source: Lateral Economics based on ABS data. Inaccurate population estimates (and of the composition of populations) can lead to poorer decision-making regarding:

A major challenge of this study is finding a robust and defensible methodology for calculating the benefits to the Australian people from having more accurate ERP estimates as a result of Census data. Drawing on studies of the benefits of the UK and NZ Censuses, we expect we can estimate the benefits flowing from better-informed service provision by using two approaches.

By using what economists call a social welfare function, we can estimate the benefit to the community of accurate ERP data by accounting for the fact that the absolute value of the benefit accruing to regions which gain more than their optimal share of funding is smaller than the absolute value of the loss accruing to regions which lose out. That is, we can take into account the fact that one dollar of funding is more valuable to a region that receives less than its optimal share than it is to a region which receives more than its optimal share.

Currently, we are consulting with federal and state agencies to learn about how education, health and other services are funded at the regional level, so we can make the best estimates we possibly can of the benefits of better-targeted funding as a result of more accurate ERP data.

We would look to the revisions in ERP figures we see occurring following the Census, and we would also consider the views expressed in stakeholder consultations, in formulating the assumptions behind the estimates we make.

As always, Lateral Economics is interested in your views on the issues raised in this post. We’d love to hear your thoughts on:

Please feel free to comment on this post or, if you’d prefer, get in touch with us via mail@lateraleconomics.com.au. We’re also happy to keep your email to us confidential should you request it.

By Gene Tunny and Nicholas Gruen and Matt Balmford

By Gene Tunny and Nicholas Gruen and Matt Balmford