If Andrew Colvin could turn back time, the Australian Federal Police commissioner would not have wasted so much time battling the minority of staff who strongly opposed his efforts to transform the organisation at every turn.

“I got to the point of calling them ‘cultural terrorists’ — that’s a terrible term I know,” he told public-sector colleagues.

“But it wasn’t going to matter what I said or did. They weren’t going to be convinced and I wasted too much energy focused on them. I needed to focus on the ones that were ready to change.”

That group makes up roughly 10% of the workforce, Colvin said, and actively tries to derail organisational change. The remainder can be divided into three roughly equal groups, in terms of their reaction to organisational change. “I was told this upfront. I didn’t know that I believed it [at the time] but I guarantee it’s true.”

This theory holds that one group of about 30% needs very little convincing, while the pesky minority at the other extreme will always throw spanners in the works. “They don’t care about it. They don’t care whether it’s good, bad or indifferent. They will want to kill that change.”

Another larger group of about 30% is “apathetic” and mostly ignores whatever the leaders are trying to say. “Okay, they come to work, they go home, they’re happy, and you know what? They probably do a fantastic job,” said Colvin. “But they’re disinterested. They’re apathetic.”

A third group can be convinced to support the change but need a clear rationale before they accept the reasoning.

“If you can … focus on that 30%, then you will find that 60-65% will get your change through, will build the momentum for what you need. So you need to focus on that.”

Colvin said his experience as commissioner was further proof that “culture trumps strategy” and set about offering his personal reflections on change-management, in his second address to the Institute of Public Administration Australia on Monday night, hosted by the Department of Finance secretary Rosemary Huxtable and IPAA ACT division deputy president Carmel McGregor.

“Culture will trump strategy every time.”

The commissioner is confident he has set in motion a series of fundamental changes within the AFP that will continue when he leaves in two months’ time. 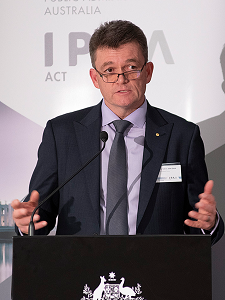 “I don’t believe it will be possible, and it certainly wouldn’t be easy to turn off what we’ve started because the organisation owns it now,” he said.

Colvin expects his successor, Reece Kershaw, will bring his own ideas and make his mark. But the commissioner hopes he has laid solid and enduring foundations, in the form of values, vision and cultural change, for Kershaw to build on.

“It’s incumbent on all of us as leaders to do what we can and make the next person who follows us better than we are. And that’s what we should be doing, and that’s why we should be making changes — so that they don’t have to, or their changes can build on the changes that we’ve made.”

He strongly believes it was the right call to pursue an “ambitious program” to change the way everyone in the AFP thinks about policing capability, technology, gender, diversity and other issues, with a view to a “future-ready” force. If he had his time again he would do a lot of things differently; he would have simplified the message, for one thing.

Read more: AFP ‘trying to correct 200-plus years of systemic bias’ against women

Colvin believes the AFP has made significant progress but is still “nowhere near” where he wanted it to be five years ago. With hindsight, he says he vastly underestimated how long it would take.

“This is always going to be a difficult process and you’ll rarely get it done in the time you think. I remember quite distinctly in my mind, having a plan when I became commissioner. And naively, I thought, ‘Well that should take two years, maybe three. Then I’ll be able to settle in and support what I’ve done, and bed in what I’ve done.’

“No. it’s not like that at all. It takes a lot longer. But we have made significant progress and I’m really proud of everybody in the AFP for supporting us in that endeavour and the progress we’ve made.”

Colvin observes that leading organisational change or “transformation” is far more difficult than it sounds.

He said it was particularly hard in the AFP because it was generally shrinking rather than expanding for most of his five years in the role. On top of that are the cultural effects of a mostly closed workforce where nearly everyone in senior roles worked their way up from the bottom over decades, as he did after joining at age 19.

“It’s really, really hard. And it’s rarely, if ever, perfect. … And you’re not going to see the rewards or the benefits or the fruits of your labour until probably well after you’ve tried to take someone down that journey.”

Another of his early observations drew a chuckle from the audience and one suspects it applies beyond the law enforcement sector:

“There’s two things that every police officer knows and hates. One is the way things are, and the other one is change.”

Every leader wants to change

Colvin presumes Kershaw will take the AFP in new directions as all leaders do. Whether department secretaries or statutory officers, he believes those who seek higher office in the public sector generally do so out of a desire to make things better.

“I can tell you it’s not always easier, but often, as you go up the food chain, things get a little bit easier for you to transform [the organisation] into the vision that you see.”

When interviewed for the job, Colvin said, he pitched a vision that wasn’t perfect and “wasn’t all that well thought out” either, with the benefit of hindsight.

After his appointment, he began to discover there was a lot he did not know about the AFP, leading to the realisation of how hard it would be to convince about 6000 people to understand and support the changes he wanted to make.

Colvin attempted to distil some of his reflections into general advice for public sector leaders, particularly those in the Australian Public Service, after discussing some of the specific details of his efforts to leave behind lasting positive change in the AFP.

When talking about a major long-term transformation, he says it helps to remind staff that continuous improvement should be a normal part of their work, not some additional annoyance. And leaders probably should feel like a broken record.

“Because long after you’ve given up on your message and you’re sick of hearing yourself say it is when people start listening. You know, there’s statistics around that say that people don’t hear a message until they’ve heard it 18 times. …

Statistics and business analysis are valuable but won’t be enough to build the momentum for change, Colvin advised. People need to understand what change means for them at an individual level.

Colvin once thought a “burning platform” like a royal commission would make it easier to get the ball rolling on making his vision of the AFP a reality, but now thinks that might actually have been worse; given it would indicate serious problems and forced changes rather than an “organic” transformation.

Next he underscored the importance of strong leadership and not delegating so much that the message is diluted.

“If you don’t believe in what you’re trying to do, you will fail. If your organisation can see through you, and you’re not genuine, then you will fall. If you falter at the first step, when the challenges come, you will fail.

“Don’t compromise. Own the vision and be accountable.”

Everyone, from the minister or the board to the senior executives and other managers, needs to be fully on board with the changes and “running hard with you” or, again, the attempted transformation will fail. He ended with one final and familiar piece of advice:

“Don’t let perfection be the enemy of the good.”

“We’ve done that in the AFP for far, far too long. Transformations and changes that were well intentioned — and we still do it to this day — have stagnated and stalled because we wanted it to be perfect.