Question time is, in a sense, the highlight of any day of parliament. It is televised and attracts the attention of the media, providing political leaders with fairly regular public exposure.

If parliament is about theatre, this is the headlining act. It is a major opportunity for the government of the day to strut its stuff and for the opposition to embarrass the government.

In theory, question time is about accountability. But in practice, it is about politics.

And herein lies the problem. Amid concerns the institution has become a venue for grandstanding, heckling and other questionable behaviours, members of parliament’s procedures committee are finalising the terms of an inquiry on how question time can be improved. The public will be permitted to lodge submissions.

Perhaps former Foreign Minister Julie Bishop put it best when she described how question time had devolved in recent years.

So, how did we get to this point, and how can we fix it?

What question time was intended to do

Question time is regarded as one of the central features of the Australian version of the Westminster system. It occurs in both the parliaments of the Commonwealth and states.

Its role is based on the idea of “responsible government” — that the government of the day should be answerable or accountable to parliament and hence to the people who elected parliament.

As it is part of the tradition of responsible government, its practice is not defined by the Constitution but by the conventions of parliament. It has evolved over time.

The general expectation is currently that around 19 oral questions will be asked during the question time session.

The practice is to allow the government and opposition to ask questions in turn, with some provision made for crossbenchers. The session is meant to focus on big issues, particularly those of immediate relevance. Hence, it is the most “political” aspect of parliament.

There was a time during the second half of the 20th century when there was a concern that too few questions were being asked. Today, the concern is there are too many “Dorothy Dixers”, or easy questions lobbed up by backbenchers who support the government.

These softball questions provide an opportunity for the government to display its wares, as their supporters can ask questions that have been prepared in advance and ministers can deliver “good news.”

Most of the other questions come from the opposition — an opportunity to paint the government in a bad light. The prime minister and other ministers cannot know exactly what questions are coming, but they can anticipate some of them and get their staff to prepare briefings.

How performance leads to boorishness

The central feature of question time is performance. It provides the prime minister and leader of the opposition, in particular, a platform to demonstrate that they are worthy of their jobs. Ministers are also given the opportunity to perform, demonstrate their capacity to think on their feet, and reveal their wit and mastery of their portfolios.

Paul Keating was particularly well-known for his sharp humour and one-liners during question time.

A good performance in question time helps to raise the spirit of the “team” and to establish psychological dominance within parliament. It also allows the government, when it is performing well, to radiate its confidence and dominance to a much wider audience.

But there is a downside to question time that comes from this quest for dominance. Parliamentarians can sometimes forget they are speaking to a wider audience. Too often, they put on an exhibition that is not particularly edifying and undermines their goals.

What appears to them to be wit and playfulness can come across to the public as boorishness and childishness.

The “optics” of the behaviour of MPs is increasingly a source of concern. When many of them were caught playing on their mobile phones during question time this week, they looked like children in class who were not paying attention. 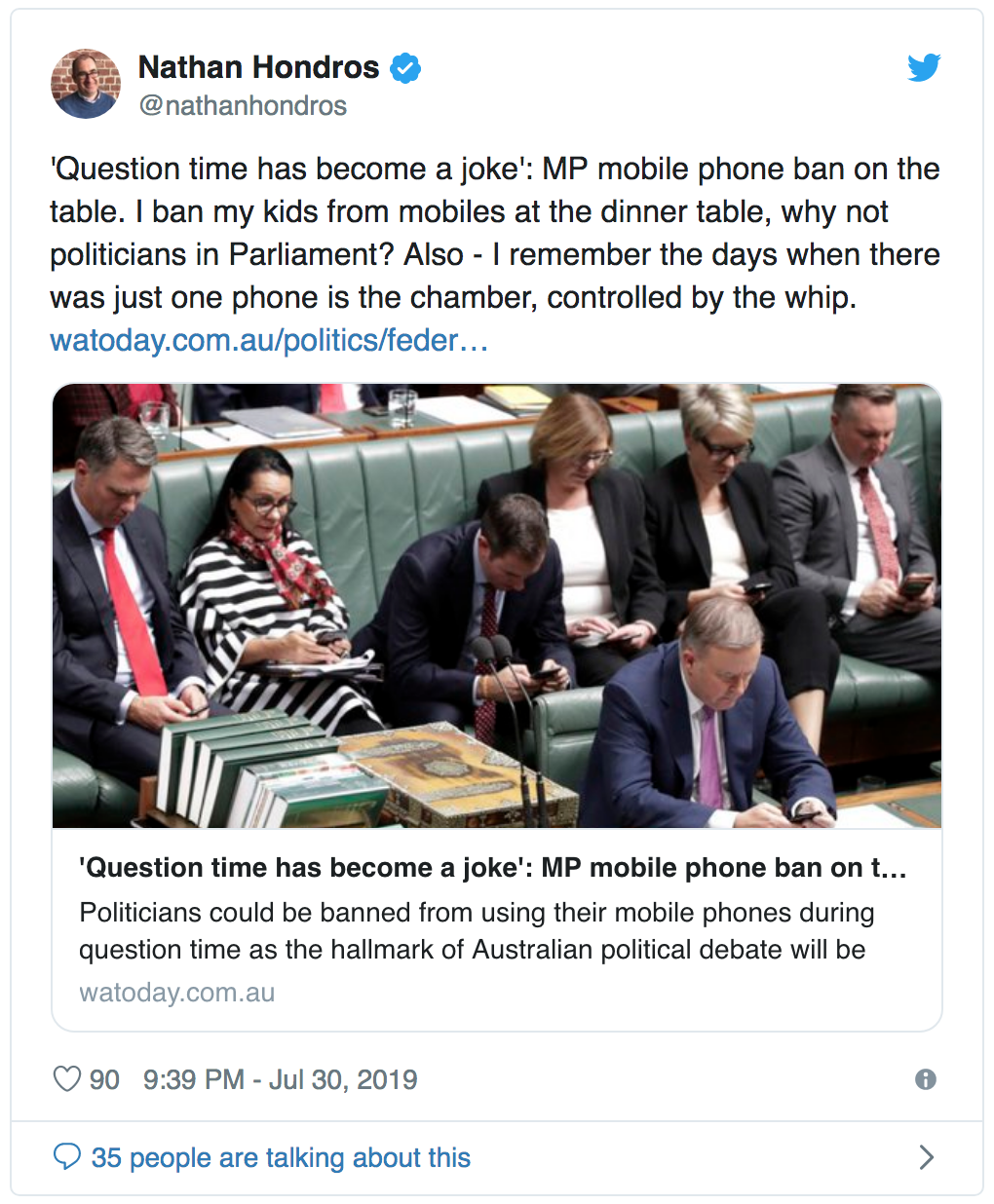 Ministers answering Dorothy Dixers also do not make for good television and are more likely to inspire contempt than respect in those watching. The impending inquiry will likely examine whether these questions should be eliminated and it may be in the interests of political leaders to do so.

There may well be an argument that politicians need to clean up their acts and make question time more suitable for a 20th century audience. Wit is a good thing, and has long been a feature of our parliamentary system, but it needs to be accompanied by good taste.

That said, we should appreciate question time for what it is — a once-a-day performance that is, in reality, much more about politics than accountability. It is a tradition of our political life and the robust exchanges are part of that tradition.