China now buys almost a third of Australia’s exports — about twice the value bought by second-placed Japan, and about nine times fifth-placed US.

It’s a situation that sparks fears of a Chinese economic slowdown, or a backlash if we offend China’s government in some way, such as by criticising its actions in Xinjiang or in the South China Sea.

In February and March customs officials in Chinese ports reportedly held up Australian coal imports. This was interpreted as a signal from Beijing about moves in Canberra to limit Chinese influence in Australia.

The Chinese government has a track record of using economic muscle to apply diplomatic pressure, including against Canada, South Korea and Palau.

“We are incredibly dependent on China – in some ways we are a state of China,” said business commentator Robert Gottliebsen. “China is now the world’s number two country and they will not stand for being lectured to by anyone — let alone a minnow like Australia.” 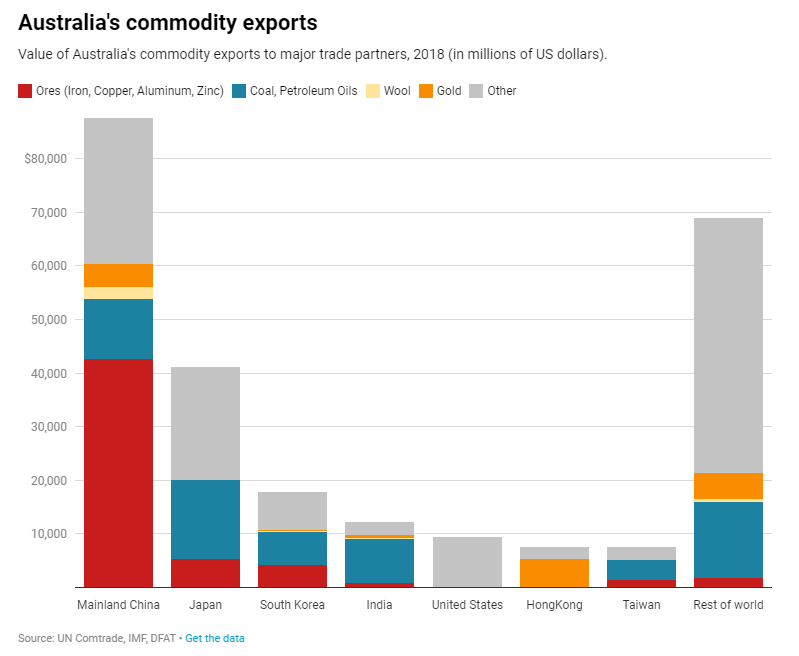 Is Australia really that dependent on China?

As a commodity exporter, Australia is vulnerable to any downturn in global markets due to a Chinese economic slump. This makes the fallout from the US-China trade conflict concerning.

But being penalised as a supplier by China for some perceived diplomatic slight is a different matter.

Using a global economic model with many commodities and countries, we modelled the effect of Beijing permanently cutting China’s imports of Australian coal by 25%.

Australia’s coal exports to China in 2018 were worth about A$15 billion — or about 1% of what the nation spends on private and public consumption in a year.

One might think losing a quarter of coal exports to China will knock about 0.25% off our spending capacity. In economic terms that’s a big number. Our results, however, point to a much smaller loss – just 1/6th the impact, or about 0.04% lower national consumption. That equates to every person having $24 less to spend in a year.

Any economic model necessarily abstracts from potentially important real-world elements, so its potential accuracy depends on the detail and data that goes into it.

So perhaps more important than the specific results of a cut to coal exports is how our modelling shows four interconnected factors determine to what degree the economy will be hurt by sanctions on any export.

The first factor has to do with the capacity to redirect exports to other markets. How easily can exporters find other buyers? How much will the price need to be cut to interest buyers? We call these “trade diversion effects”.

If Australia could not divert exports elswehere, China buying 25% less coal would see the volume of total Australian coal exports fall by about 6%. Our modelling shows the likely fall would be about 1/12th of this, at 0.5%.

The chart below shows our results. The blue line shows the effect on the total value of coal exports. The stacked columns show the effect of China’s cutback being offset by sales to other markets – notably Japan, South Korea and countries in Southeast Asia. 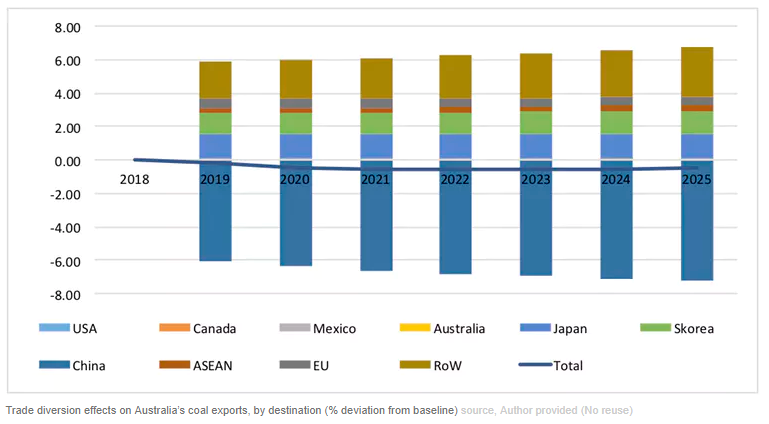 To sell more to another buyer, it’s likely exporters will need to reduce prices. Our model anticipates the Australian coal price will fall by about 3%.

The second factor is how easily resources can switch from coal production to other activities.

For any resource that can move to alternative uses, the impact of the trade sanction will be reduced. Labour is an example. A miner no longer needed to meet demand for coal will generally have skills transferable to other jobs, although this might require working at a lower wage in another region.

For any resource that cannot easily move – the capital invested in specific coal-mining equipment or transport infrastructure, for example – lower export revenue will mean lower profits from these assets.

How do lower profits affect Australian living standards? This depends on who owns the affected assets, and how much tax they pay.

For our modelling, we set foreign ownership of the coal industry at 80%, based on Reserve Bank of Australia estimates and an analysis of mine ownership in New South Wales coalfields. With just 20% of the after-tax profits staying in Australia, the impact of any change is minor.

The local economy, however, can also suffer due to lost taxes on the income of those foreign owners.

Taxation effects are the fourth factor.

Australian governments collect taxes through mining royalties (a tax on the value of production), corporate tax (on profits), and withholding tax (on interest and unfranked dividends).

A smaller cost than some think

With all these factors in play, our modelling suggests there is less to fear
from the Chinese government throwing its economic weight around than some think.

We think our conclusions probably hold for many of Australia’s exports to China, but acknowledge our investigation is preliminary.

For example, what would happen if the Chinese government decided to restrict the number of Chinese students studying in Australia? Finding new markets for education services might be tougher than for primary products. Resource redeployment might be easier, however.

Notwithstanding these caveats, this type of modelling could provide a clear framework to assess Australia’s economic vulnerabilities.

Perhaps no price should be put on upholding and expressing our liberal democratic and human rights values, and protecting our security interests, but the cost of economic sanction might well be less than many fear.