Like death, drugs, and alcohol, sex is an historical fact of life that has been a zone of hot-blooded political debate, but also of genuine bipartisanship. Part 3 of the ‘Politics of the unmentionables’.

We’ve been talking to current and former political figures about the history of bipartisanship. One of our interviewees issued a challenge. ‘Tell me one area, apart from national security, where there has been bipartisanship in recent memory.’

We’ve found some examples and — curiously — many of them fall into the category of the unmentionables — including sex.

Some forms of bipartisanship are utterly temporary, the result of political pragmatism or expedience, or a political emergency. Bipartisanship is sometimes just a truce — such as when parties bury the hatchet in times of self-preservation, like needing water from the Murray-Darling. But other forms are more enduring. Bipartisanship often rests on values that are rare in politics but nevertheless powerful: values such as trust, respect, loyalty, honour, pluralism, multilateralism, meritocracy, selflessness, friendship, and even love.

Despite its long and storied history, sex work is still poorly regulated and highly stigmatised. In many places it is illegal, and sex workers have few protections from violence and other dangers. Also, in the absence of spent convictions laws, historical offences can trap people in this field of work.

After 13 attempts and decades of debate, the South Australian parliament is likely to pass this year a Bill decriminalising sex work. (The debate is scheduled for 30 October.) Earlier in 2019, Greens member Tammy Franks introduced the Statutes Amendment (Decriminalisation of Sex Work) Bill in the legislative council. It received support from across party lines and quickly passed the council with an overwhelming majority. 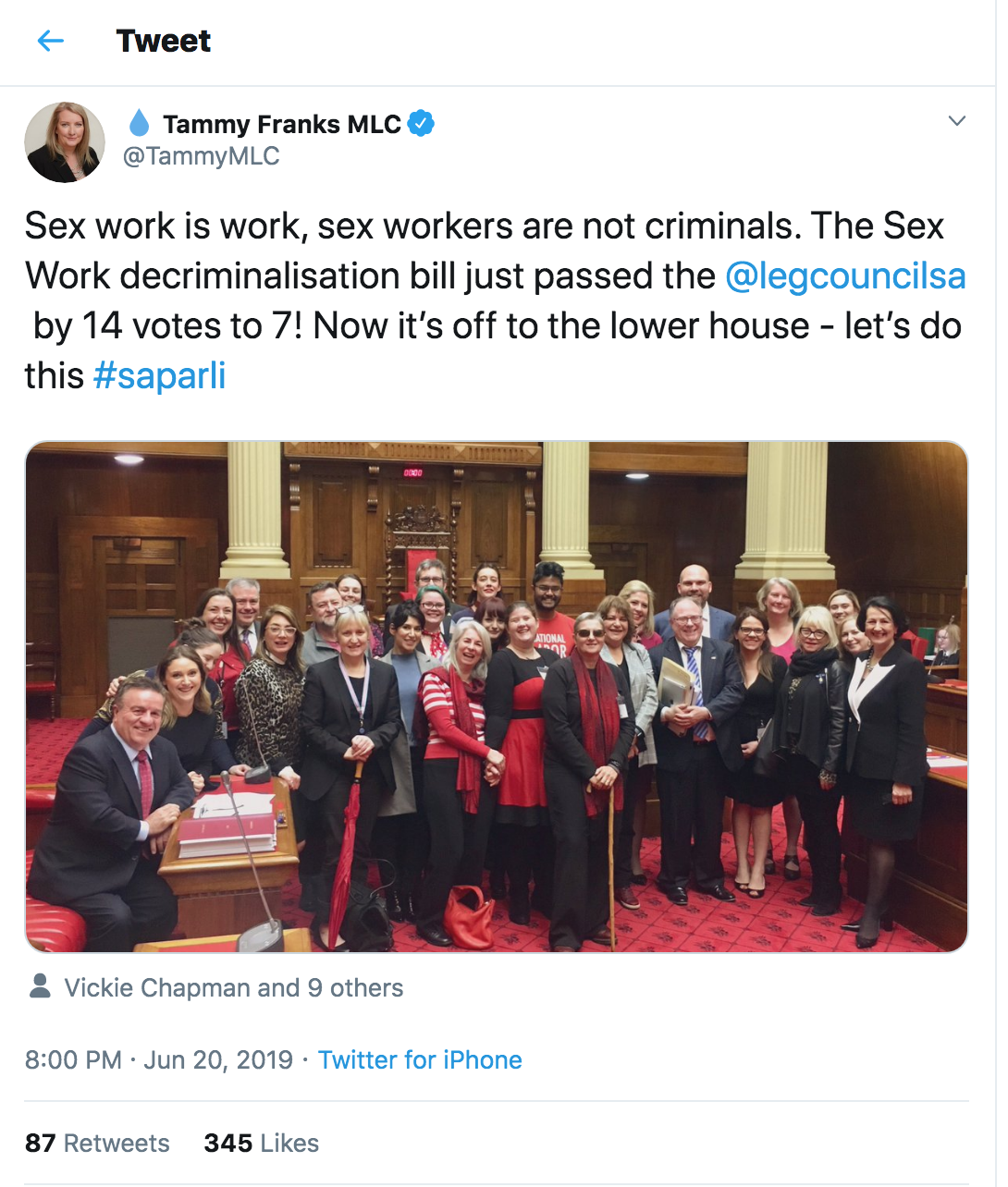 In 2017, the council had passed a similar Bill, but after that it stalled and was never debated in the assembly. Earlier attempts to introduce similar legislation — in 2013 and 2015 — had also failed. But this time, Liberal Deputy Premier and Attorney-General Vickie Chapman has championed Franks’s Bill in the lower house:

I rise to speak on the Statutes Amendment (Decriminalisation of Sex Work) Bill 2018 and it is with much pride that I do so. I had wondered, given the history of this matter, whether we would ever come to this day, but I am proud to say that we have. [The bill] seeks to progress reform to remove offences relating to prostitution and the keeping of brothels from our criminal law, both the Criminal Law Consolidation Act and the Summary Offences Act. Furthermore, the bill ensures that current and former sex workers cannot be discriminated against under the Equal Opportunity Act and that they are covered through return to work provisions. Finally, the bill brings offences relating to prostitution, brothel keeping and street soliciting under the spent convictions regime, allowing prescribed sex work offences to be spent convictions.

I end with this: our parliament is left with two options. We either persevere with the status quo, effectively ignoring sex workers as the victims of crime and perpetuation of the stigma around this industry, or we progress with decriminalisation and see a stronger protection for workers and women. I implore all my colleagues on both sides of the house to consider this carefully and support the decriminalisation of sex work.

After more than 20 years of fighting on this issue, the SA parliament has seen a remarkable degree of bipartisanship.

South Australia has a fascinating political history. In many ways it has been at the forefront of social reform and progressive politics — and in other respects it has been a conspicuous foot-dragger.

In 1894, after some chaotic scenes and a debate that extended long into the night, SA was one of the first places in the world to give women, including Indigenous women, full political equality. SA was also the first state to establish a public housing trust (1936). The state was narrowly pipped by NSW in the introduction of female police officers. (NSW appointed the first female police officers in July 1915; SA appointed theirs in December 1915.)

South Australia had the nation’s first LBGTIQ Premier, Don Dunstan (June 1967 to April 1968, and June 1970 to February 1979). Who can forget Dunstan’s legendary pink shorts and white T-shirt? The Premier wore these in parliament, in the name of ‘dress for your climate’ (or — as some might say — to ‘show off your guns’). The shorts were bequeathed to Dunstan’s widowed partner, Stephen Cheng, who donated them to Adelaide’s Centre for Democracy for ongoing display.

SA was the first state to introduce a Prohibition of Discrimination Act (in 1966) and to legalise abortion (in 1969), something NSW has only just done, after another marathon parliamentary debate. Yet SA was the last state to recognise same-sex couples: the state’s Statutes Amendment (Domestic Partners) Act 2006 took effect on 1 June 2007.

NSW was the first state to decriminalise prostitution in 1979. Victoria followed in 1986, Queensland in 1992. Why has it taken SA so long to make the change? Is there latent conservatism in this freely settled colony? Is it the abundance of churches? Whatever the case, SA is on the cusp of righting a historical wrong.

To find out more about how Australia’s sex industry laws were formed, we spoke with the former South Australian Minister for Social Justice, Steph Key. Steph shared her insights on a political struggle lasting decades and how reaching across the divide helped South Australia reclaim its prominence as one of Australia’s most progressive states.

The [decriminalisation] legislation was particularly important — because we have got probably the most conservative 1935 legislation.

And for me, that was all very well — if people chose to leave that profession to do something else.

But the problem was that if they’d been charged in any case and at any time — they would have a criminal record.

And this made it very, very difficult for people to do what — I call them ‘do-gooders’ — were saying.

So this became the campaign, to change the spent convictions legislation.

Spent convictions are convictions that are no longer relevant to your life and don’t need to be disclosed.

So, through the sex work bills, that was one of the amendments as part of the legislation.

[Doctor Bob Such] was very enthusiastic about changing the spent convictions legislation because one of his constituents had come to him and had been caught urinating in a public place. And as a result of that had a conviction, and what was termed to be a sexual conviction, because he had exposed his genitals, having a piss.

He had gone to Bob Such, his local member, and complained that this was on his record for evermore.

And as things hotted up with regards to child protection and protecting vulnerable people, [the constituent] was having trouble at his local school – being cleared to read to his grandchildren — because he had a conviction of a ‘sexual’ nature.

A lot of the sex workers had exactly the same problem.

Bob wasn’t opposed to the sex work legislation — but that wasn’t his main issue with the spent convictions legislation, it was this poor chap who’d been booked all those years ago for urinating in a public place.

Anyway, the long and short of it was is we eventually got some amendments to the spent convictions Act.

Politics of the unmentionables, part 1: Death

Politics of the unmentionables, part 2: Drugs

Politics of the unmentionables, part 4: Love

Scott Hamilton and Stuart Kells are Melbourne-based authors, researchers and policy advisers. They are researching the history of bipartisanship in Australia.