Australians like to think we live in a country of the fair go, where anyone with the talent and willingness to work hard can succeed.

But the evidence shows success is still partly inherited. Children with poor parents are more likely to grow up and be poor as adults.

The latest biennial report of the Australian Institute of Health and Welfare highlights the ways in which social and economic position is transmitted between generations.

Understanding the nature and extent of inherited disadvantaged in Australia has been aided by five significant research studies in the past five years. Four of them use data from the comprehensive Household, Income and Labour Dynamics in Australia (HILDA) Survey. The fifth used tax records to estimate the intergenerational mobility of people born between 1978 and 1982.

Among the results to come from these studies are estimates of the degree to which a 10% increase in fathers’ earnings affect their sons’ earnings. The studies offer a range of 1% to 3.5% – with a higher percentage meaning less social mobility.

The single-parenthood pattern was among those identified in research published in 2017 by myself, Sarah Dahmann, Nicolas Salamanc and Anna Zhu. The importance of family structure is underlined by the fact young adults are more likely to receive a range of welfare payments if they grow up in single-parent families.

The following graph shows the results of our research. 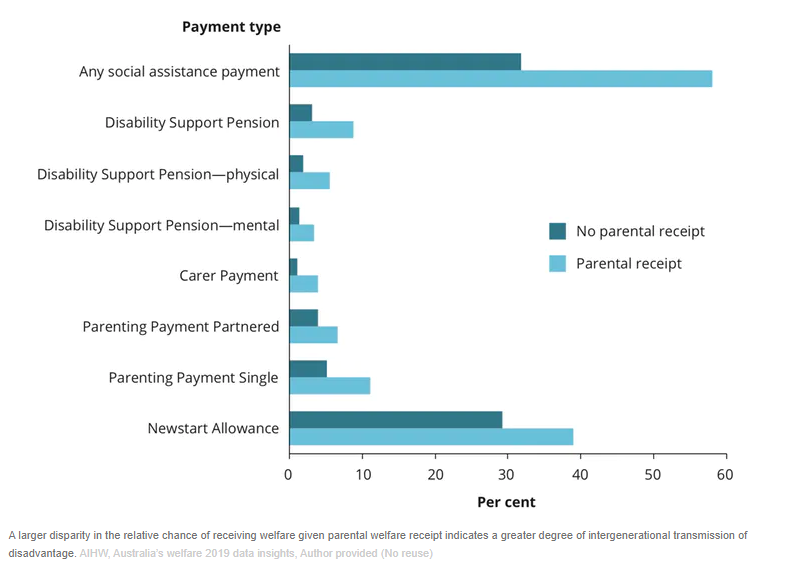 But the strongest relationship in intergenerational disadvantage involves parental disability.

Young people whose parents received the Disability Support Pension for mental health reasons were almost three times as likely to be receiving the mental health-related disability benefits as other young people. They were also more likely to need other social assistance payments

The intergenerational relationship between youth unemployment and parental disability, for example, and was just as strong as that with parental unemployment.

Social mobility is higher in Australia than many other developed countries (most notably the United States). But it remains lower than the Scandinavian countries, and is threatened by any increase in inequality.

A growing gap between richest and poorest grows pulls the rungs of the socioeconomic ladder further apart, making it harder for disadvantaged Australian children to avoid becoming disadvantaged adults.