Prime Minister Scott Morrison has issued the second new edition of the Cabinet Handbook since he took office, with a few substantial changes made since the last edition was released in November.

The operations of the federal government’s top decision-making body obviously never undergo radical change, so the bulk of the document stays the same from one version to the next. The Department of the Prime Minister and Cabinet published the 13th edition on Tuesday.

While the 12th addition said neither ministerial advisers nor departmental officials should attend cabinet meetings “to ensure the proper emphasis on the role of ministers” — a longstanding convention — the new iteration is more welcoming of public servants.

“Officials can be co-opted by the Cabinet Secretary to attend Cabinet for a specific item if necessary.” 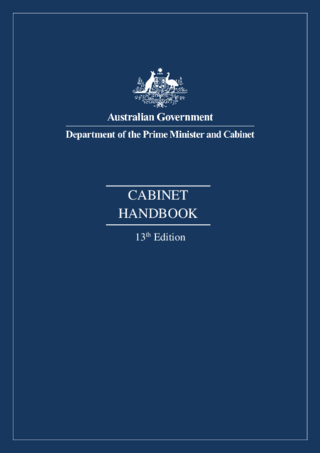 There are a couple of subtle changes. One emphasises that only “invited” public servants and ministerial staffers can attend cabinet committees. Another alteration hints at a slight relaxation of the convention that only senior executives at band 3 level, or ministerial chiefs of staff, should be brought along; the new handbook says that is “generally” the rule.

The 13th handbook includes more detailed guidance on how cabinet ministers and department heads should monitor the ongoing implementation of policy decisions to make sure they are working as intended, and so any unexpected problems can be addressed quickly (paragraph 37).

“Ministers and secretaries will agree and implement appropriate reporting regimes for delivery of programs, services and new policy work designed around the Government’s priorities for the portfolio,” says the newly inserted text.

Another addition (paragraph 44) makes it clear that Morrison strongly prefers to see his senior ministers in person:

“Ministers should attend Cabinet and National Security Committee of Cabinet meetings in person unless there are exceptional circumstances that prevent this, in which case telepresence or dial-in may be possible if agreed by the Cabinet Secretary in consultation with the Prime Minister. Ministers should attend other Cabinet committees in person, with telepresence or dial-ins with the prior agreement of the Cabinet Secretary having regard to the needs of the meeting.”

The guidelines around what proposals merit consideration in cabinet have also been substantively reworded (paragraph 71). No longer does the handbook state that the need bring a matter to the top table “must be balanced against the demands that Cabinet meetings make on ministers’ time” and a previous caveat that said significant decisions would bypass cabinet “only in emergencies” has been deleted.

A lot of changes explain that in certain cases where the PM’s authority was previously required, authorisation can alternatively come from the cabinet secretary (currently Andrew Shearer).

The new book also includes a slightly reworked description of the federal budget process (paragraph 87) and explains that Shearer will be the main source of guidance on how submissions should be formatted (paragraph 91):

“The Cabinet Secretary will advise ministers on the appropriate form of document to bring a matter forward based on the type of deliberation — the general principle being that the form needs to be fit for purpose to support the type of consideration necessary. For instance, first pass discussions unpacking a complex portfolio issue might best be supported by a presentation which could lead to a second pass consideration at a later meeting supported by a Cabinet submission with detailed costed New Policy Proposals for decision. Cabinet Division can provide advice and guidance to ministers and their departments to ensure documents are drafted effectively to support the Cabinet.”

The guidance on PowerPoint presentations and the like has also been updated (paragraphs 106, 107 & 108). The new holy scripture of cabinet recommends these should aim to inform an in-depth discussion, use graphs and data where possible, and run no longer than 15 pages.

“Presentations can be brought forward to the Cabinet as standalone items or accompany formal submissions where agreed by the Cabinet Secretary. Presentations are to be factual and should not seek agreement to decisions or have any fiscal impact.

“An electronic copy of the presentation must be provided to Cabinet Division on the Thursday before the relevant meeting and becomes part of the formal Cabinet record. Presentations are circulated to central agencies for short coordination comments.”

For proposed appointments, the new book states that the nominee’s private interests declaration should be signed no more than six months before their name is put forward to the PM, and another new sentence (paragraph 123) adds:

“Departments are responsible for ensuring that appropriate due diligence is undertaken prior to appointments being proposed to the Prime Minister.”

The 13th Cabinet Handbook is the second since Scott Morrison took office in August 2018, coincidentally only three days after the 11th edition emerged online.