Australia’s social scientists and the intelligence agencies have a new joint role in protecting the country, but may need a more tech-savvy workforce to get there.

There are historical precedents for this kind of cooperation. In September 1939, just as war broke out in Europe, the Cambridge University scholar Alan Turing arrived at Bletchley Park to take up a position helping the UK government break the German codes and cipher machines.

Australia’s current geopolitical situation is obviously not as dire. But we are facing the same institutional problem. The country has not been able to develop an intelligence workforce that can keep up with the speed of advancing technologies today and their intensifying threat to our national security. 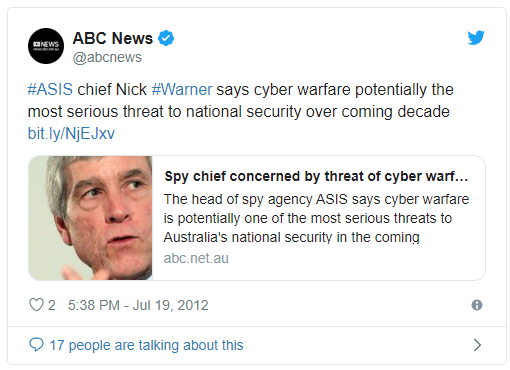 Seven years later, as the new director-general of the Office of National Intelligence (ONI), Warner again publicly asserted that accelerating technological change is not only changing the business of intelligence; it’s changing the entire world.

Warner specifically mentioned recent innovations in nanotechnology, quantum computing, synthetic biology and facial recognition technology as among the most critical for our intelligence agencies to better understand.

As it stands, there are gaping holes in our capability to grasp both the threats posed by these new technologies, as well as the opportunities for our intelligence agents to use them in their missions.

On the threat side, one area where Australia and most other countries are weak is the need to have advanced, 24-hour monitoring and immediate remediation of cyber-intrusions for nationally connected systems.

This can only be done through the development of artificial intelligence applications unique to the country, its cyber-infrastructure, and the threat profile of potential adversaries. An algorithm for Australia’s system, for instance, will not work for the United States.

But how many Australians are qualified in this area? This shortfall in the number of candidates with high-tech qualifications to help remake our intelligence workforce is probably the main reason why leaders like Warner are going public with their concerns.

Around the time Warner made his speech this April, the Office of National Intelligence (ONI) asked the Academy of Social Sciences in Australia (ASSA) to advise it on how scholars could assist the agencies in doing their job better, including in the area of addressing new, advanced technologies.

ONI was following the lead of the chief intelligence agency in the United States, the Office of the Director of National Intelligence (ONDI), which had asked the US National Academies of Sciences, Engineering and Medicine to do the same thing.

Their report was released in March 2019 after two years of work, 100 working papers and a cost of A$15 million.

The American scholars’ report revealed how the richest, most technologically advanced country in the world was struggling to maintain confidence in its intelligence capabilities at a time of emerging, often invisible or untraceable threats in cyberspace.

The most surprising conclusion of the American scholars was that the solutions would be found in areas of social policy and workforce development.

The report gave prominence to the emerging concept of social cyber-security. The focus, they said, had to be in forecasting the changes in human behaviour that have been caused by new cyber-technologies. 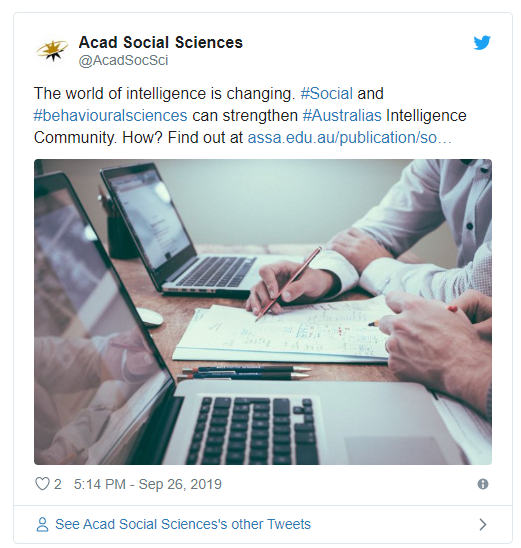 Building off the US report, the Australian scholars’ most important recommendation was that our country needs a strategic plan for workforce development in the intelligence community that can deal with emerging cyber-threats.

They want to see a commitment to developing a bigger pipeline of more diverse and capable intelligence analysts, schooled as deeply in the social and political aspects of cyber-space as in the technical dimensions.

As I argued in a 2017 discussion paper on this topic — and as many others have also argued — Australia is not even close to a national workforce plan for a high-tech future.

The Coalition government, like the opposition, is happy to leave the universities to set the pace in terms of educating a future high-tech workforce. Only token amounts of money have been invested in new cyber-education programs by the government. That investment has come without any corresponding strategy at the federal level.

In spite of some small successes, the universities are not delivering. We need to know why. Are traditional universities even the appropriate venue for advanced cyber-social research and education?

We certainly need a greater sense of urgency. In May, the US declared a national “cyber emergency”, the third time it’s done so in the past four years. At the same time, it released a new cyber workforce strategy as a primary plank of its emergency response plan.

Australia should adopt this urgency to create a new workforce capable of countering the high-tech threats of the future.

Dr Austin is a Professor in the Australian Centre for Cyber Security at the University of New South Wales (Canberra). He concurrently serves as a Professorial Fellow with the EastWest Institute (EWI) in New York. He has a career of achievement in international security affairs. As Vice-President of the EastWest Institute, he led its work on counter-terrorism, countering violent extremism, and cyber security, including leadership and supervision of research output.