Just over half of federal public servants and 70% of senior executives reported capability gaps in their work groups, when asked for their views on the matter this year for the first time, according to the 2018-19 State of the Service Report.

Via the anonymous employee census, 43% of the Australian Public Service reported gaps in “people management and leadership” and nearly as many saw weak points in data-related skills (38%) and written communication (37%). Other data suggests Commonwealth public servants have reasonably high confidence in their senior executives.

Just over a third of public servants say their team has skills gaps related to information and communications technology. Gaps in change management and oral communication skills were both observed by about 30% of staff, and 24% say their team is missing a few sparks of creativity and imagination. 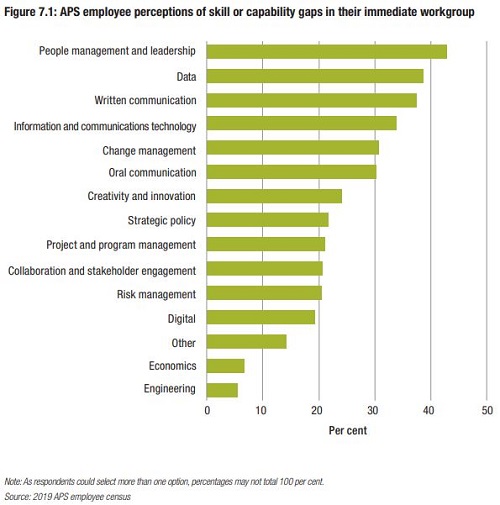 Five other potential areas of capability deficit in work groups were each reported by about a fifth of the APS: strategic policy; project and program management; collaboration and stakeholder engagement; risk management; and digital.

There’s another bonus with the latest edition of the SOSR: three quarters of agencies have agreed to publish some of their own employee census results for the first time, including all the main departments.

“By publishing our census results we hope to boost accountability and trust in the service,” Commissioner Peter Woolcott said in a statement. “We welcome scrutiny and feedback, and want to make the most of staff insights to lift our performance.”

Since the census form takes about 45 minutes, and 77% of employees filled one out this year, he also hopes publishing agency-level data will give them a greater sense of their leaders listening and being held accountable.

Woolcott said he brought the idea to the Secretaries Board, which agreed, but could not shed any light on why 25% of agencies opted out.

Engagement levels continue to rise and about 80% of staff believe in their agency’s purpose and are committed to its goals. A healthy 91% of staff say they are “happy to go the extra mile” and 92% say their colleagues and supervisors act with integrity.

Woolcott says the APS must do more to convince the public it is a bastion of integrity, trustworthiness and other virtues. It should “aspire to … a change in mindset from compliance to a pro-integrity culture that promotes and exemplifies shared integrity-related values and practices” in his view.

Innovation ratings are up slightly, but the level of positivity about “risk culture” is down.

The workforce continues ageing (average age: 43.6) and its geographic footprint remains stubbornly familiar despite several years of talk about further decentralisation. About one third is located in Canberra, and that group includes two thirds of the senior executive cohort.

That is the highest separation rate since 2008-09 but there’s a disclaimer: it includes staff of the Australian Signals Directorate, who ceased being employed under the Public Service Act at the start of the financial year. The ASD annual report puts its 2018-19 headcount at 1877 ongoing staff.

The APS is also gradually becoming more diverse. The LGBTI+ cohort is now 4.8%, up from 4.4%, and gender equality continues to rise.

Women now account for 46.3% of the senior executive service ranks, after getting 57% of the SES promotions in 2018-19. All signs point to this trend continuing and the gender pay gap continuing to narrow as a result. Over 60% of senior executives aged over 54 are men, while women are firmly in the minority among those departing the APS.

While 3.5% of the APS now identifies as Indigenous, Woolcott noted that most are in the lower levels, very few are senior executives, and that does not appear to be changing.

For people with ongoing disability, the challenge is not just increasing representation but making people feel more comfortable revealing this status to their employer.

Only about 3.7% of the APS are known to their agency as people with disability and the target is to get that up to 7%. On this year’s anonymous employee census, however, 8.4% of the workforce declared an ongoing disability. This suggests one challenge is creating an environment where staff see a benefit to disclosing their disability rather than fearing it would only be to their detriment.

People with disability have for years reported the highest rates of perceived bullying and harassment and discrimination in the APS and are significantly less likely than others to report feelings of inclusion. These negative experiences are also much more common in the Indigenous and LGBTI+ cohorts, and more common for women than men.

Workforce diversity strategies for gender equality, people with disabilities, and Indigenous employees are all up for renewal and the word from the mandarins is they want to go beyond numerical representation and focus more on inclusion.

Woolcott foreshadowed new leadership development programs for Indigenous people and hinted at new targets for representation at higher levels, not just in the total workforce.

Read more: Are the planets aligned for APS reform, or is it more like a perfect storm?