The good news is our road toll is reducing. The bad news is that many young drivers are still engaging in risky driving practices – and forming bad habits — at the very start of their driving careers. This is one of the latest findings from Growing Up in Australia: The Longitudinal Study of Australian Children (LSAC).

Growing Up in Australia has been following the lives of around 10,000 children since 2004. In 2016, 3,000 of the study adolescents aged 16–17 years were asked about their experiences of risky driving. Respondents included learner drivers, P-platers and passengers.

We know from other research that use of mobile phones is a risk factor when driving. While this survey did not investigate mobile phone usage, the study highlights that other types of risky driving behaviour deserve our attention.

We found that eight in 10 P-platers and more than half of learner drivers had engaged in some form of risky driving during their 10 most recent trips. The most common types of risky driving by 16–17 year-olds were speeding and driving when very tired.

Risky driving behaviour was, not surprisingly, more common among P-platers than among learner drivers who (with the exception of motorcyclists) are required to drive under adult supervision.

However, one in six learners had exceeded the speed limit by between 10 and 25 km/h on a recent trip, and one in four had driven when fatigued — two behaviours commonly implicated in serious road crashes.

Around half of young drivers who took risks on the road reported that they had only done so once out of their 10 most recent driving trips. Of concern, however, was a small group who took risks on every trip. Around one in five teens who had failed to wear a seat belt (or a helmet if riding a motorcycle) had done so on all of their past 10 trips.

Figure 1: Number of trips (in past 10) by those who engaged in each risky driving behaviour 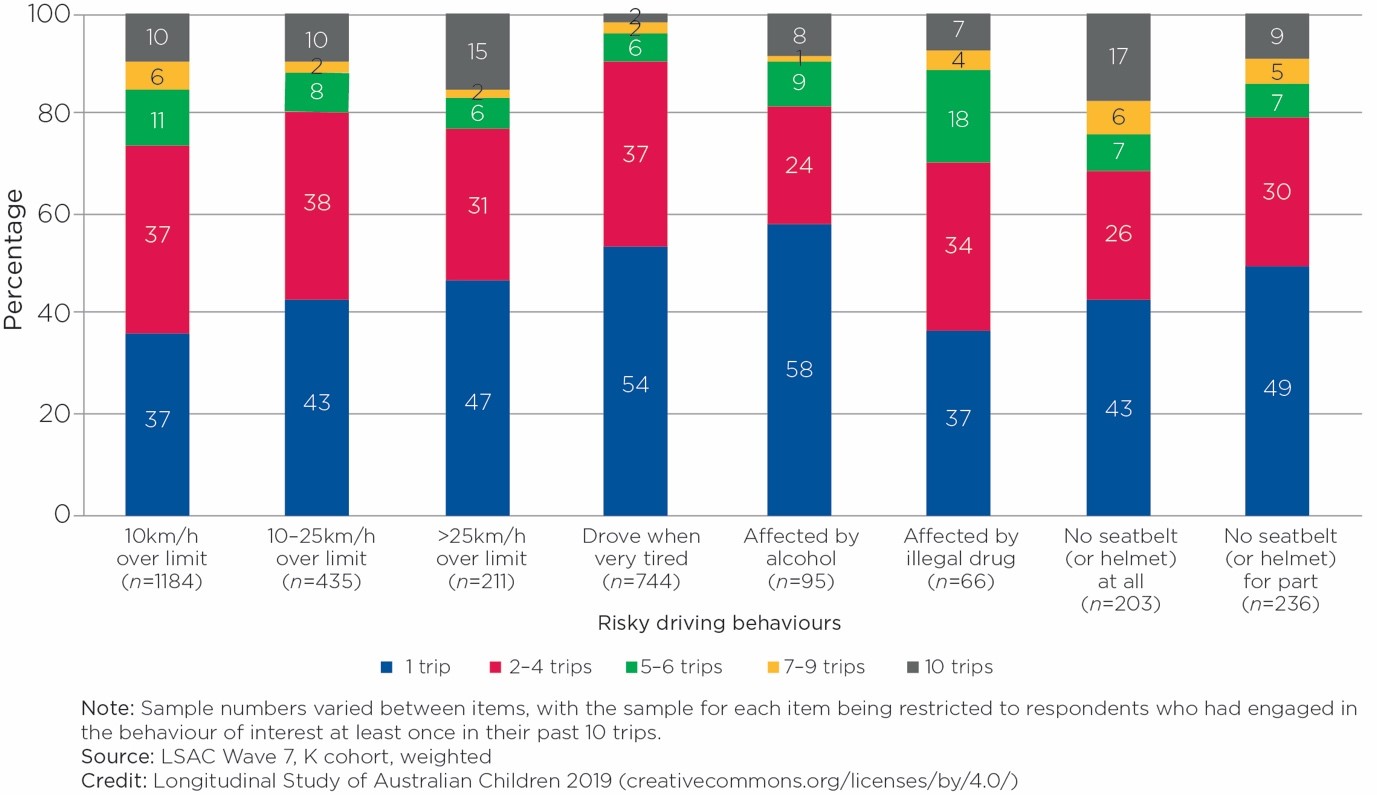 What are the characteristics of risky drivers?

Using LSAC data, the characteristics of 16–17 year-olds who engaged in different types of risky driving (speeding, drowsy driving, not wearing a seatbelt or helmet, and drink and drug driving) were examined.

Teens who drank alcohol or used marijuana had a higher likelihood of engaging in all types of risky driving. Alcohol use was strongly linked with drowsy driving and speeding, while marijuana use was strongly related to failure to wear a seatbelt or a helmet.

Teens with high levels of conduct problems, like lying or stealing, had a higher likelihood of engaging in more intentional forms of risky driving, such as driving without a seat belt or helmet or drink and drug driving.

But even benign lifestyle factors can have an influence on driving behaviour. For instance, having a job was associated with drowsy driving, with many young people juggling work, study and other commitments and driving at night to get to and from work or to socialise.

Teens as passengers of drivers ‘under the influence’

Adolescents often rely on others to drive them places. Research has shown that it is relatively common for teens to report having been a passenger of a driver who was under the influence of alcohol or drugs (a DUI driver).

Our study found that around one in 10 teens had been the passenger of a driver who was under the influence of either alcohol or drugs. When asked who the DUI driver had been, the most common responses were: a friend about the same age (45%), an older friend (25%) or a parent (25%).

Of the 16–17 year-olds who reported having been a passenger of a DUI driver, a higher percentage (15.8%) lived in outer regional or remote areas than in major cities (9.3%).

Teens who had been a passenger of a DUI driver were much more likely to drive under the influence themselves, showing that attitudes and behaviours of parents and friends can have a strong influence on young people’s driving behaviour.

While Australia’s road toll has dropped dramatically over the last four decades — from 3,798 deaths in 1970 to 1,135 in 2018 — young drivers continue to be over-represented among road crash victims. More than one in five drivers killed in 2016 were aged 17–25 years, and one in four drivers seriously injured were of that age range.

The first years of people’s driving careers are a crucial period — a time when driving habits and attitudes are being formed, and when young drivers may be more receptive to change. Road safety measures and public education campaigns have contributed to reducing road trauma in Australia, but we cannot be complacent. The Growing Up in Australia data offers rare insights into risky driving among Australian teens. Our study data gives state government agencies, road safety and public health experts clues about potential opportunities for intervention to influence behaviour change and reduce risky driving among learner and P-plate drivers.

AIFS conducts original research to increase understanding of Australian families and the issues that affect them.