Everybody tells you they are somewhere on the journey towards the holy grail of digital transformation. But sometimes it feels like we’re all stuck in the departure lounge while the airline gives us another lame excuse for delays. Will we ever get to our destination?

The book’s main point is how the rationale for the public sector should be focused on how designers and administrators go about solving the real and wicked problems that affect systems and impact businesses. Its contention is, if you change your mindset to ‘How am I going to solve this problem for people or businesses?’, then digital-transformation tools and techniques rise to the fore. Are We There Yet’s message is you won’t get there by only looking at your challenge from a cost-reduction or ‘let’s digitise our existing processes’ perspective, but by recalibrating your service-delivery thought processes.

READ MORE: Are we wise enough (smart enough) to survive our own success?

The deep respect the authors have for everyone and everything already done in the public sector with regard to digital transformation is clear throughout the book. The writers are optimistic about Australia’s ongoing prospects for digitalised processes, recognising both the challenge and opportunity for thinking about how to deliver services in this country. Stewart-Weeks & Cooper wrote Are We There Yet with the Thodey and other reviews in mind, and recent turning cogs, such as the NSW government shifting to eight clusters and the announcement of Services Australia, mean certain governments have pre-empted some of the things the book is advocating for. I guess that’s an ongoing hazard of writing about current affairs in a world that is changing at the most rapid pace in history. 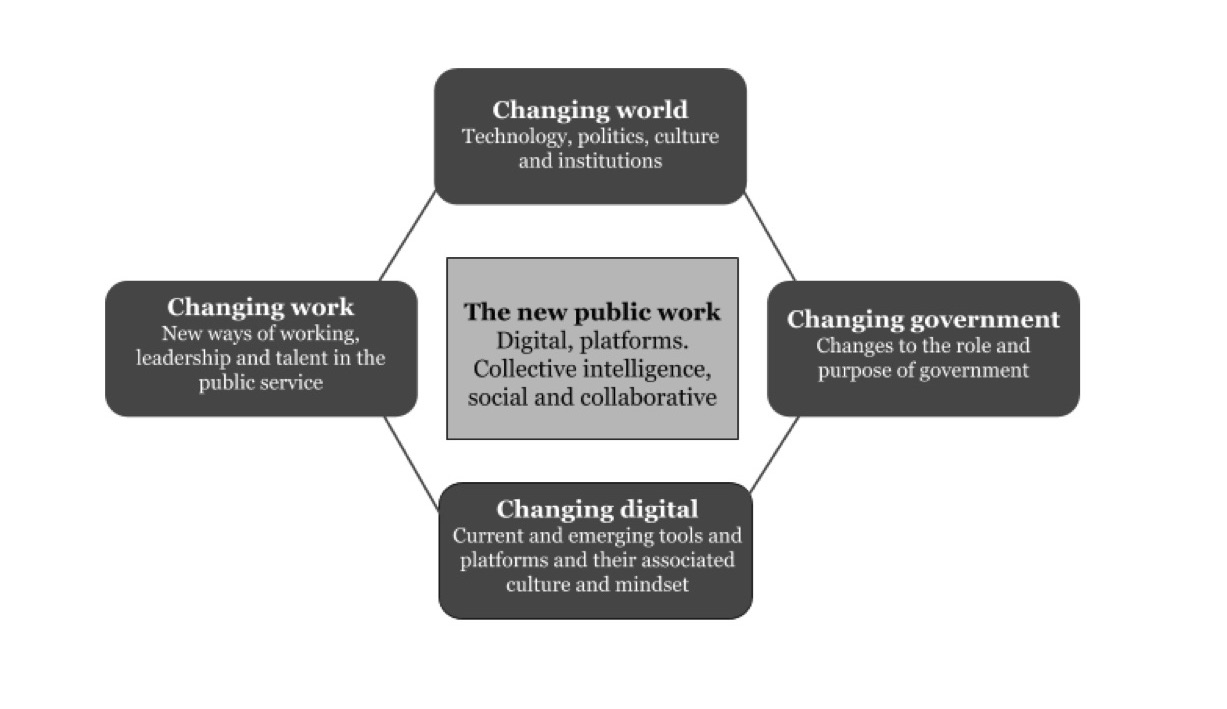 The top diamond point talks about understanding the changing nature of the world and world forces that impact commitment to public service in the context of a democratic trust deficit.

The right diamond point is about having governments calibrate what service delivery means in a 21st-century world that is rapidly leaping from manual to digital to automated to AI to IoT to robotics.

In the diamond’s bottom point, the authors position an understanding by all in the public sector of changing digital tools and services. Says Cooper, ‘I no longer want to hear anyone saying “I don’t do technology”. You might not like technology, might not be a technologist, but you absolutely need a broad understanding of digitisation.’

The left point of the diamond is Stewart-Weeks & Cooper’s ‘new theory of the business’, which centres on collaboration, collective intelligence, and convening as roles and purposes of government.

The diamond’s middle is about the understanding of digital skills and capabilities. If you accept the notion that you need to understand digital technology or have an interest in it, you need to think about reframing what the public service is for, and you need to think about that in the context of the changing world. They coin this as ‘the new public work’. It requires different skills and capabilities in the public service to those needed in the 20th century.

In many ways, digital transformation in the public sector and in the private and not-for-profit sectors have similar aims and challenges. All are pivoting towards thinking about how they can meet 21st-century customer/citizen needs. The government arguably has always thought about customer needs, but now it is really thinking about it with human-centred design. The big difference, say Stewart-Weeks & Cooper, and one that is part of the reason we’re not there yet, is that if a government gets something wrong, everyone really, really feels it. If the roads and hospitals don’t work, the buck stops with the government. That makes it a bit more challenging when it comes to innovating and thinking about things differently. In government, it is crucially important to get things right, whereas in the start-up culture, they can experiment with something for a year and simply bin it if it goes wrong. Governments can’t quite do that. Are We There Yet talks about changing the in-vogue phrase ‘failing fast’ to ‘trial, test and learn’ — borrowed from the private sector and well mastered by the start-ups.

The book talks about the public service conundrum of government departments existing to solve big problems and deliver solutions whilst at the same time being constantly told not to hang onto power. Large tech giants like Facebook, Google, Amazon are a dominant part of the landscape, but that doesn’t mean that the government’s regulatory role is no longer relevant. Stewart-Weeks & Cooper argue that government is, by its very nature, always going to have power. They emphasise the power of convening and collaborating, saying that if you look at things like some of the AI leadership summits, some of the strategy documents, the ability of government to get people together — be they big players or small — to discuss an issue, and start to think about how you might be able to do that in a safe, sustainable, and trusting way that’s going to meet citizens’ expectations of common decency, trust, and ethics — government power isn’t going anywhere.

The crux of Are We There Yet is that anyone at any level of public service needs to be able to understand and think about digitalisation and technology in at least a broad context if they are to have an informed discussion about policy in the 21st century. Start by getting an understanding of the power of platforms and data, and be open to building from there.

For a limited time, new annual subscribers to Mandarin Premium can get a free copy of Martin Stewart-Weeks & Simon Cooper’s ‘Are we there yet? The digital transformation of government and the public sector in Australia‘.

Peter Debus is The Mandarin’s Public Sector Director. Peter was most recently Director of Strategic Collaboration and Relationship Management at ANZSOG. Before joining ANZSOG, he was a publishing director at both Macmillan Publishers and Cambridge University Press.