In a year that began with floods and will finish with fire, emergency fundraisers have grown rapidly, increasing by 35% during 2019. Many farmers seeking relief from extended drought conditions have been compelled to turn to crowdfunding.

As for the wreckage wrought by the current bushfires, GoFundMe reported that by the end of November, more than 700 campaigns were launched in response.

Australia is now ranked third globally in donations per capita, with one in ten contributing to a GoFundMe campaign this year. Regional towns are the most generous donors, with Wagga Wagga, Mackay, and Launceston ranking highest.

And globally, on GoFundMe alone, crowdfunding campaigns have raised over US$9 billion from 120 million donations.

Between bushfires, devastating floods, and a drought with no end in sight, crowdfunding campaigns reflect a weary resolve amid the perceived inadequacy of government responses to natural disasters.

Crowdfunding previously played only a relatively minor role in Australian life. But several recent campaigns illustrate the increasing influence crowdfunding might serve in forms of advocacy and activism.

Volunteer firefighting crews, stretched to their limits after weeks on the frontlines, have attempted to crowdfund equipment and supplies.

In fact, the most successful Australian GoFundMe campaign ever – raising $2 million from more than 45,000 donors – is for the Port Macquarie Koala Hospital, treating koalas injured during the fires. 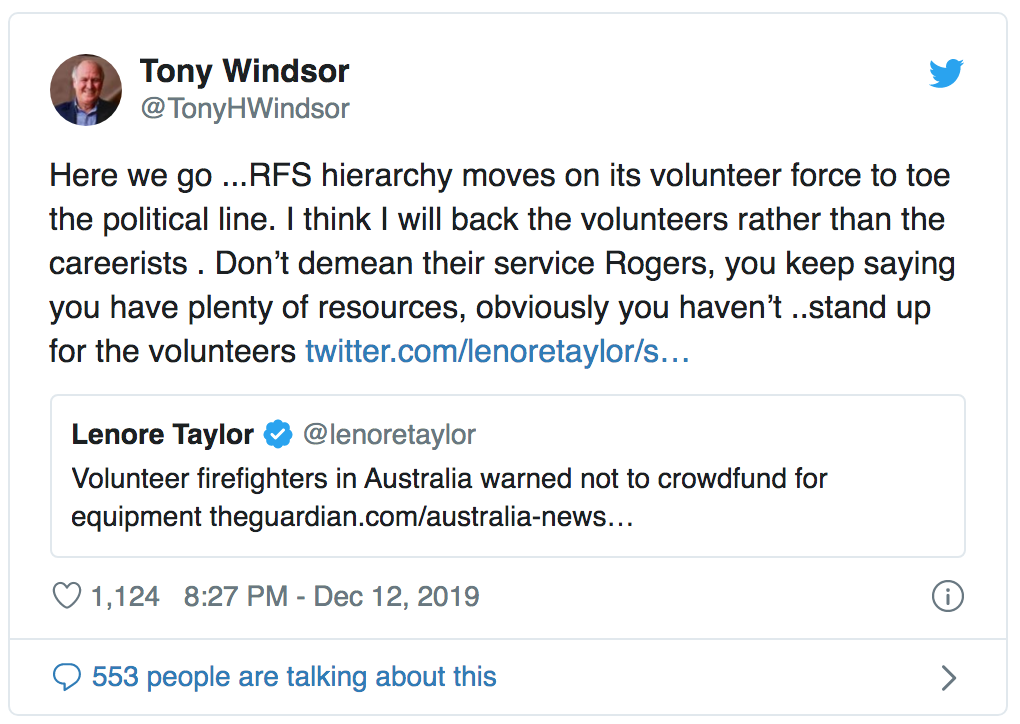 But some close observers within charitable and philanthropic groups still advise donors to consider directing their contributions through registered charities.

One local brigade’s efforts to fundraise better protective masks were met with warnings from the rural fire service against establishing campaigns “without the appropriate authority”.

Not just advocacy, political activism too

Other campaigns in GoFundMe’s top ten most successful this year reveal that, at their best, such causes can simultaneously serve as direct advocacy for marginalized people and wider activism to address underlying injustice.

An immensely praiseworthy example — and the third most successful campaign this year — is “FreeHer”.

This campaign raises funds for Indigenous women in Western Australia imprisoned for inability to pay fines (such as Ms Dhu, who died in police custody after being held for unpaid fines).

The FreeHer campaign achieved immediate impact and sent a resounding message that such practices are wholly intolerable. The WA government subsequently repealed the laws.

Beyond this, there are now wider calls to address incarceration rates, particularly for Indigenous Australians, whom Aboriginal activist, academic and community leader Noel Pearson argued are “the most incarcerated people on the planet Earth”. 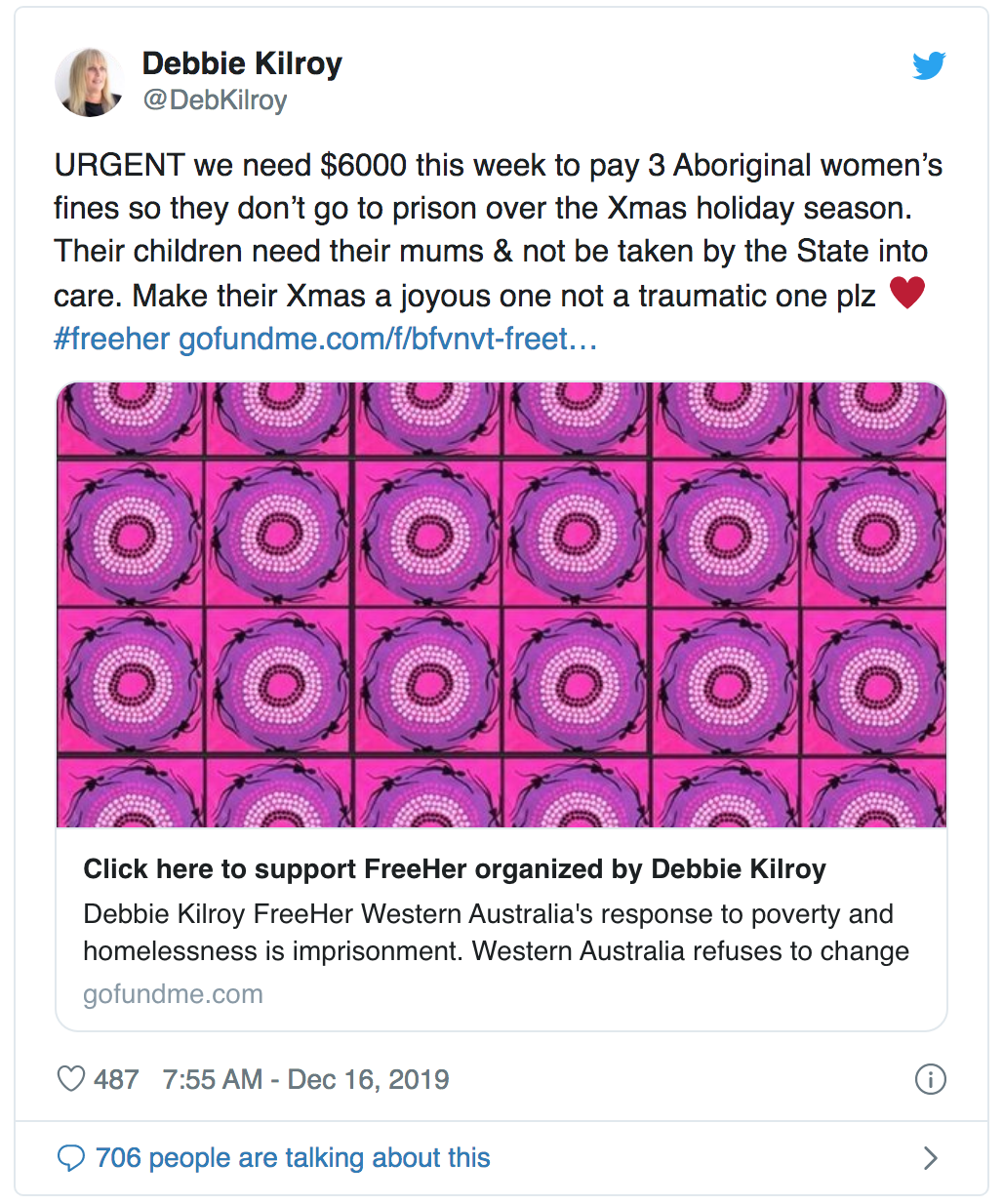 Other notable campaigns this year were even more directly political, something previously uncommon in Australia.

Among them were Senator Sarah Hanson-Young’s defamation case against David Leyonhjelm, the counter-campaign to “Fight the Greens”, and a few wholly unsuccessful efforts to re-elect hard right nationalist Fraser Anning.

When his expenses were covered pro bono Connolly donated the funds to victims of the Christchurch mosque shooting.

However, concerns have been raised that crowdfunding election campaigns could harm electoral integrity, largely due to the difficulty of tracing the source of donations.

Who gets a soapbox?

Conspicuously absent from GoFundMe’s list of most successful campaigns was one that might have otherwise finished on top.

The campaign’s de-listing from GoFundMe – and rejection from the Australia-based MyCause platform — fed into narratives of Christians feeling “bullied”.

Why? Well, GoFundMe and MyCause are private companies, but to many they also represent the public square, presumably open to all. Such companies can act as gatekeepers, barring campaigns they believe may harm their reputation.

Perhaps the most infamous example was between 2014 and 2016, when GoFundMe banned campaigns directly raising money for an abortion. GoFundMe later relented, and have recently partnered with the ACLU and Planned Parenthood in support of reproductive rights.

The enthusiasm of the Australian Christian Lobby to host Folau’s campaign after it was de-listed — raising over A$2 million in two days — could also foretell a more ideologically-driven array of crowdfunding platforms. The furore may have even given the Morrison government an easier task in selling the Religious Discrimination Act.

Competing for attention in markets of sympathy

Crowdfunding can achieve wondrous outcomes, but less heartening is how often it’s needed to correct failures of the state, or suffering caused by private interests.

An obvious example is medical expenses, which easily comprises the most common type of campaign, despite the very low chances of success and threat of further harm.

It’s these heart-wrenching campaigns many pointed to when criticising Folau’s claim he was in “the fight of my life”.

Social crowdfunding platforms are effectively markets for sympathy, where “the crowd” weigh claims to moral worthiness. Such mechanisms create few winners and many losers. And suffering can be compounded in witnessing how much one’s life is worth in the eyes of others.

Crowdfunding is a popular tool of recognition and redistribution, promising new ways to govern ourselves and determine what values we hold.

But we must ensure it doesn’t become an altar of “sacrificial citizenship”, where good people falling on hard times must prove they are uniquely deserving above all others.

Platforms of public appeal cannot be a substitute for good governance and institutional protections.