The COVID-19 coronavirus has created an unprecedented challenge for Australian departments across all portfolios, and determining what governments have done well — and not so well — could very well be crucial to meeting it.

Here, we aim to cut through the noise with short, succinct coverage of everything from daily data to research breakthroughs to media screw-ups. We hope you enjoy, and, as always, welcome any feedback as we grow this new product!

Is the Pacific ready?

While the Pacific Islands are yet to record a case, vast distances, dispersed populations, and limited resources make the region especially vulnerable. Devex reports how the ‘World Health Organisation in the Pacific’ is working to coordinating multiple initiatives to implement preparedness, surveillance, and response activities; these will include supplies “to support 50 to 100 cases”, and emergency medical teams from groups including the Australian Medical Assistance Teams.

Singapore’s government is being praised for seemingly neutralising the virus — amidst 96 cases, there are zero reported deaths — however, as Fortune explores, Singapore’s success is dependent on several, hard-to-replicate factors: “a top-notch health system, draconian tracing and containment measures, and a small population that’s largely accepting of government’s expansive orders.”

As China rolls out new software for citizens’ health — intended to determine contagion risk in real-time and in turn dictate whether a person should be quarantined — a New York Times investigation has found the system shares information with police, creating a new precedent for automated social control “that could persist long after the epidemic subsides.”

In contrast with China’s failure to communicate the spread of the coronavirus strain — i.e. restricting public information, lying about human-to-human transfer, detaining and deporting outspoken scientists and journalists — Taiwan has been lauded in The Diplomat for encouraging a free-flow of information, including daily briefings, real-time apps for face mask availability, and fact-checking websites — that, as UN researcher Roy Ngerng details on Twitter, engineers public trust that proved crucial to a) avoiding panic situations and b) prioritising effective mask-use and resource allocation.

Amidst reports that cases in America may have gone undetected for weeks now, it’s worth considering the US Centers for Disease Control and Prevention’s textbook example of government hubris. As ProPublica reports, the CDC initially rejected the World Health Organization’s test guidelines in favour of a more ambitious, complicated test for both the coronavirus and related viruses, creating both a dud test — it correctly identified the COVID-19 but falsely flagged other viruses in harmless samples — and wasting valuable weeks that could have been spent “surveillance testing” with the WHO’s system.

Beijing-based media group Caixin has questioned China’s decision not to include in public tallies individuals who have the new strain but do not display symptoms, after receiving a document showing 104 asymptomatic cases were excluded from official counts in Northeast China’s Heilongjiang province.

Communication fail of the day

New York Governor Andrew Cuomo has announced that the US state confirmed its first coronavirus case yesterday; it is not, as this Reuters headline might imply, Governor Cuomo himself. 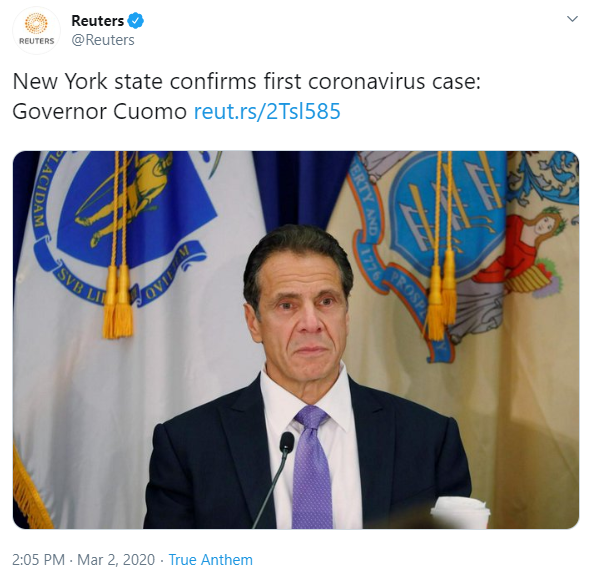