The Roman biographer Gaius Suetonius Tranquillus believed power doesn’t corrupt so much as it allows one’s worst, preexisting instincts to go unchecked. His epic biography, Lives of the Caesars, showed how power made the emperors of Rome feel free to indulge their own passions and pursuits, no matter how weird or reckless — often, to their own demise. Josiah Osgood breaks it all down for you.

“The moment Nero became emperor,” Suetonius writes, “he summoned the lyre player Terpnus, considered the best at the time, and for days on end sat by him after dinner as he sang late into the night.” Little by little, Nero began to sing himself — to the horror of his domineering mother, Agrippina, and his tutor, the philosopher Seneca. Similarly, as a schoolboy, Nero had an enthusiasm for racehorses; “in the early days of his rule,” he started sneaking off to the Circus as much as possible. Soon enough, he wished to drive chariots himself.

In Suetonius’s biography of Tiberius, we see the emperor retreat to the beautiful and isolated isle of Capri, where it was easier to ignore public affairs and “give free rein to all of the vices that he had badly concealed for so long.” Suetonius catalogued these faults — including hard drinking and cruelty — in horrifying detail, before revealing that they were a part of Tiberius’ nature all along.

Long before Tiberius became emperor, his army buddies had spotted his love of drink and joked about it. His rhetoric teacher, too, had put his finger on Tiberius’ cold, harsh nature. Even Tiberius himself, Suetonius suggests, peered into his own soul and glimpsed the monster he would later become — or, in truth, already was.

Suetonius’ biography of Julius Caesar tells of the emperor’s famously brutal murder on the Ides of March. But he also tells us about Caesar’s dining habits and sex life, his physical health and appearance. Small observations matter: Caesar was always irritated by his baldness, because he could be mocked for it, and he was thrilled when he won the right to wear a laurel crown on all occasions. Before then, he had been forced to rely on a combover.

Readers have fun with juicy details like these. They make Caesar seem like a real person. They also help us to grasp Caesar’s arrogance and vanity, and to understand how those qualities ultimately led to his catastrophic end.

The bad emperors featured in Lives of the Caesars — Julius Caesar, Tiberius, Caligula, and Nero — have much in common, but their badness isn’t created equal. Tiberius, for example, at least tried to hide his cruelty; Caligula wanted to flaunt it.

The way Suetonius classifies information, though meticulously, is not objective; it’s designed to persuade the reader. To cover first, briefly, the positive aspects of Nero’s rule and then, at far greater length, his “disgraceful and criminal acts” clearly accentuates the negative.

Romans had a tendency to satirize their late emperors, and Suetonius’ comments may reflect storytellers’ efforts to one-up each other more than sober reality. In reading what follows, one is free to ask: did Tiberius endorse a man for public office because he drank six gallons of wine at a party? Did Caligula wear a beard made out of gold to look like Jupiter, or carry a trident as if he were Neptune? Did Nero sing through an earthquake that shook the theatre he was in? Or are these more like political cartoons? 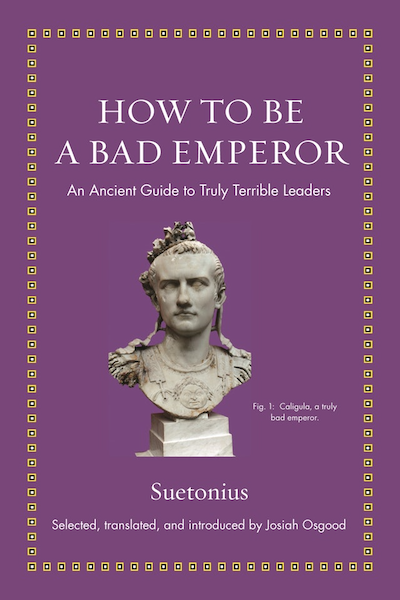 Suetonius was not making things up himself, but he may have relied on material not strictly reliable. Yet there can be little doubt that he was convinced that emperors had the ability to do both great good and great harm. Augustus, the paradigmatic good emperor of Lives of the Caesars, beautified Rome, improved its infrastructure, restored its religion, and promoted discipline in the army, among other accomplishments.

By contrast, bad emperors, by succumbing to vice, didn’t just indulge themselves — they neglected the defense of the empire, inflicted food shortages on the people of Rome, and robbed, tortured, and murdered members of the Senate, not to mention their own relatives. They stripped others of their dignity and beat them into submission.

What is the purpose of gathering together Suetonius’ stories of bad emperors? One answer is that they help to explain features of our own time. Our fascination with great power and with great personalities owes something to the Romans, and to the Lives of the Caesars in particular. Suetonius spawned many sequels in antiquity and beyond, and through translation and adaptation — including Robert Graves’ famous Claudius novels — he has given us a sense that to be a Caesar is to be outsize, outrageous, out of this world. It is no coincidence that one of Las Vegas’ longest-running casinos is called Caesars Palace.

We are shocked by Caligula’s cruel put-downs or Nero’s mania for performance, but we also find their transgressions just a little bit pleasurable — find the men themselves almost entertaining. In the 21st century, we see better than ever how politicians can build movements around their personalities. Suetonius helps us to understand why. In giving free rein to their own desires, the Roman emperors may tap into our hidden wishes, too.

But then they pull us up short. We see just how badly they dealt with the challenges they faced. In a reversal of the usual self-help formula, Suetonius’ depictions of Rome’s bad emperors become a guide for how you can be a good leader, whatever your role in life.

Julius Caesar refusing to stand to greet the Senators when they come bearing honours is a lesson in how to treat colleagues. Tiberius trying to win glory from a disastrous fire: a reminder that you shouldn’t always try to take credit for your accomplishments. Caligula brutalizing those around him, even forcing his father-in-law to cut his throat with a razor: brutalise, and you will be brutalised back. Nero meeting the threat of rebellion by loading his wagons with organs for the theatres and concubines with buzz cuts: your pet projects may fatally undermine you and your organization.

The stories of the bad emperors and the weird worlds they constructed make for entertaining reading. They are also a meditation on how the acquisition of power may not so much corrupt, as the old adage has it, as allow our own worst qualities to slide out and harm us. Unrestrained power may be thrilling, but, in the end, proves ineffective.

Excerpted from How to Be a Bad Emperor: An Ancient Guide to Truly Terrible Leaders by Suetonius. Selected, translated, and introduced by Josiah Osgood. Copyright © 2020 by Princeton University Press. Reprinted by permission.

This extract first appeared on Medium. 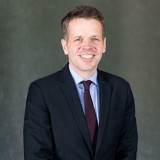 Josiah Osgood is Professor of Classics at Georgetown University in Washington DC. He is the author of How to Be a Bad Emperor (Princeton, 2020).