When Dr Francis Collins, Director of the National Institutes of Health (NIH), called for an end to all-male speaking panels at conferences, he was surprised by the scale of the response.

In June last year, Dr Collins, who runs one of the world’s foremost public funders of biomedical research, released a statement on the NIH website, stating that “I want to send a clear message of concern: It is time to end the tradition in science of all-male speaking panels, sometimes wryly referred to as ‘manels’.”

Not only did he pledge to decline speaking opportunities at scientific conferences where “attention to inclusiveness is not evident in the agenda”, he also challenged “other scientific leaders across the biomedical enterprise to do the same”.

Among those to show support was Dr Jeremy Farrar, director of the Wellcome Trust, who tweeted: “We @wellcometrust agree & have made a commitment & refuse to serve on panels or talk at events that do not honour the same commitment.” 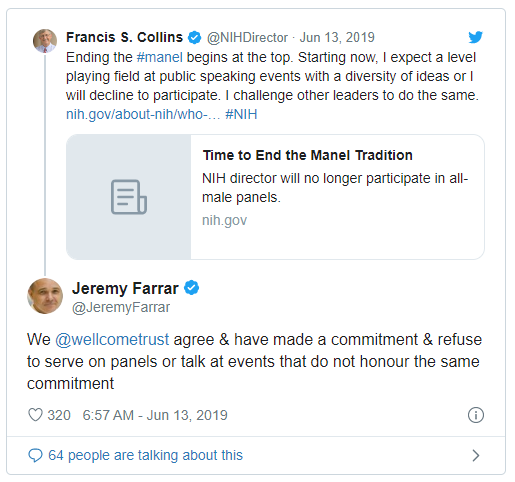 At Davos earlier this year, I had the pleasure of running a press conference on the COVID-19 outbreak with Dr Farrar and moderating a panel on Alzheimer’s disease with Dr Collins.

By taking action, both men are trailblazers for diversity and inclusion, and changing the playing field for women scientists everywhere.

Manels are symbolic of a bigger problem

In the first place, manels are simply a superficial manifestation of a deeper and more complex global problem, namely the lack of female representation on public boards, in political leadership, and in the senior management of universities, start-ups and Fortune 500 companies.

While we certainly can’t fix the boards of companies, we can manage the public perception of who the experts are — subject experts can be women too! In turn, it will hopefully change the perception that technical expertise lies only in a small pool of men. By providing visibility to professional women, we are chipping away at a much larger problem.

In a 2002 randomised double-blind study published in PNAS, 127 faculty members from research-intensive universities were asked to rate the application of a candidate for a laboratory manager position. The candidate was randomly assigned a male or female identity.

Not only did faculty participants rate the male applicant as significantly more competent and hireable than the female applicant, but they also offered him a higher starting salary and more career mentoring. This subtle bias was seen across all faculty participants — both female and male faculty were equally likely to view the female applicant as less competent. Therefore, the meritocratic notion that “the best person will be hired for the job” remains a flawed one.

Almost daily, I attend conferences stacked with all-male panels, or manels. In the most egregious case I’ve witnessed to date, the panel was stacked with seven men.

On the occasion that I’ve called these manels out on social media, I’ve been offered a version of the following:

Conference organisers: “We asked X number of women, and all of them said no to us. We tried our best.”

Speakers: “I did notice that there were no women on my panel, and I flagged the issue with the organisers. I’ve done my best.”

Attendees: “I paid for my ticket to attend this conference. It’s not my problem!”

As I work closely with conference organisers, I understand the challenges they face when recruiting women speakers. At Asian Scientist Magazine, we face similar issues when searching for female interviewees. Hence, for conference organisers to find more women speakers for their panels, I encourage them to cast their net wider across all sectors: academia, industry, government and non-profit.

For male colleagues deliberating over a speaking invitation, I recommend that they decline the opportunity if a female panelist cannot be found, as well as proactively suggest the names of their female colleagues. It will be helpful if more prominent individuals follow in the footsteps of Dr Collins and Dr Farrar, by publicly pledging to never again speak on a manel.

Even conference attendees can make an oversised impact on the diversity of panels, by calling out manels on social media platforms like LinkedIn. Peer pressure works, especially if the person speaking up is respected in their industry.

What women speakers can do

Although conference organisers and male speakers have leverage on how diverse a panel turns out, professional women can also take matters into their own hands.

I often hear women tell me that they do not want to be placed on a panel just because they are a woman. Here’s what I think — regardless of motivation, they should seize the opportunity when it is offered to them. They absolutely should say yes and then prove how much their opinion matters. In the event that they have commitments elsewhere, they can always recommend other women speakers.

Conference organisers regularly search for new speakers on Google and social media platforms. It is, therefore, critical for women to maintain their visibility on social media. A simple hack would be to complete their LinkedIn profile, and to include video clips or photos of past speaking engagements.

Virtual networking aside, the value of real-life networking cannot be underestimated. As a start, women could commit to attending industry events regularly and following up with new contacts via email. At these events, they may meet younger women in search for mentors. By providing guidance to these younger women, they are creating a pipeline of future female leaders.

Frankly, having one woman on a panel is still not enough. The critical number is 50%! But it is more important that we start somewhere. To achieve true inclusion and diversity, everyone from conference organizers to speakers and attendees can do our part.