South Korea is a densely populated, highly urbanised country, yet the number of new cases seems to be under control, for now — see graph below from the Korea Centres for Disease Control and Prevention daily update.

The number of  new cases each day (green bar) has decreased since the peak in late February, resulting in a slower increase of the accumulative number of total cases since the second week of March (blue line). South Korea is flattening the curve without resorting to draconic lockdowns, travel bans, or panic buying. Why? 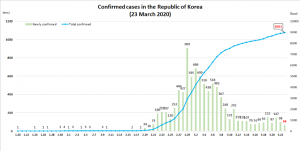 Testing is vital, but so is tracing and tracking

In South Korea, early detection and widespread testing were not the only reason for its slowing down of the spread of COVID-19. The country employs a vigorous contact tracing and tracking system for identifying potential cases and preventing the spread.

Epidemiological investigation is like detective work. Tracing contacts of a confirmed case and tracking their symptoms is vital in containing further spread in the community. Identifying the clusters and mapping transmission routes provide a clearer picture of how the virus can be effectively contained.

Testing is the first step, but contact tracing and tracking allows proactive containment of the spread.

On 16 March, South Korea set up a new one-stop system that allows these data to be immediately available for epidemiological investigation. Previously, the investigators at the Korea Centre for Disease Control and Prevention (KCDC) had to request information from the police, which caused a delay for time-sensitive action.

This new system is the result of inter-agency collaboration and is built on the pilot smart city infrastructure project. This is a temporary system which is set up under the Infectious Disease Control and Prevention Act for emergency epidemic control purposes only.

The authorities identify close contacts and promptly notify them

The health authority works closely with the Ministry of the Interior and Safety and local governments for epidemiological investigation. Once the travel history is known, the local investigation team triangulates surveillance footage, mobile GPS data and credit card transaction information to identify those individuals who were in close contact.

Close contacts are then contacted by the local authority and issued isolation notices. They receive one-on-one phone calls from a designated local officer who checks in twice a day to monitor their symptoms and compliance to self-isolation.

Meanwhile, the local authorities make the travel logs of confirmed cases publicly available via their websites and other social media platforms. The community receives mobile text messages. Everyone who was in the vicinity takes extra precaution and remain vigilant. Citizens use this information to plan their movements.

Below is an excerpt of detailed travel logs for selected confirmed patients that is posted publicly on the Seoul Metropolitan Government coronavirus website. 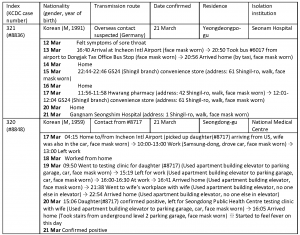 Mobile app for monitoring symptoms and compliance to self-isolation

Since the number of people in mandatory self-isolation started to grow exponentially, there aren’t enough staff to handle one-on-one phone calls.

So the government developed an app. Patients and confirmed close contacts under self-isolation record their daily health symptoms into the app, and their location data is used to monitor compliance to self-isolation.

It is expected that most people will translate to this system — those who don’t will continue to be monitored by their designated local government officer.

Not all countries have the legislation, digital infrastructure or the public consensus for such vigorous tracking and tracing of their citizens.

Details of travel history are valuable for epidemiological investigation, but publicising them is a different story. The government claims that making the location information publicly available keeps citizens vigilant and accredits the fairly successful containment to transparency and openness.

While fear and panic are exacerbated by lack of information, not all data is information. Data is only meaningful when it has added value to the intended audience in making informed decisions.

Perhaps the more significant risk for an individual of contracting the virus in Korea is not that of a clinical nature, but social stigma and public humiliation. As the number of recovered patients start to grow, they are now suffering from trauma and guilt.

Privacy and freedom are foundations of liberal democracy. However, it already looks like countries  are faced with unprecedented ethical decisions concerning life and death.

Italy is making the unthinkable decisions about who gets to receive medical care and who is left to die. Many countries are enforcing draconian lockdown measures despite the detrimental economic and social impacts on their society.

Leaders around the world have now declared war-like situations against the virus. Automobile manufacturers are producing ventilators. In many countries, it is now against the law to leave your home for non-essential travel.

Maybe it is time to reconsider privacy concerns for the sake of protecting the greater good. We can only evaluate these aggressive actions after the crisis is over. Moreover, this crisis cannot be an excuse to justify future invasion of privacy in normal times.

Epidemiological investigation in the 21st century

Perhaps these kinds of vigorous data collection and public disclosure are what has allowed South Korea to avoid a complete lockdown. People are aware of when and where the risks are, and behave accordingly. Yes, staying at home and physical distancing is one effective measure to flatten the curve. But we must remember that epidemiological investigation must always stay ahead of the curve.

We need to ‘test, trace and track’ to identify potential patients and separate them early to stay ahead of the curve. To do this, we need to be more creative and aggressive and think beyond the traditional methods for epidemiological investigation.

For live information on the response in South Korea:

This article is curated from Croakey.org. 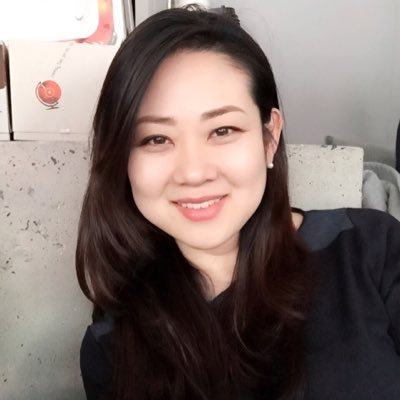 Jinhee Kim is a Scientia PhD Scholar at UNSW in Sydney, Australia. She is affiliated with the Centre for Health Equity Training, Research and Evaluation (CHETRE), part of the UNSW Sydney Centre for Primary Health Care and Equity, a Unit of Population Health, South Western Sydney Local Health District, NSW Health, a member of the Ingham Institute. She occasionally does paid consultancy work for the Korea Institute of Health and Social Affairs. In the past, she has been worked for and with various government institutions in Korea at local, regional and national levels.