The jury is still out on the origins of the SARS-CoV-2 virus (COVID-19).

What is known is that a new form of corona virus crossed over from animal to human hosts in Wuhan over the final weeks or months of 2019 before galloping across the province of Hubei in December to reach epidemic proportions in China later in January and then spreading internationally at remarkable speed. By the time the World Health Organisation (WHO) confirmed a global pandemic on 11 March 2020 the thing had bolted.

Identifying the source of the novel corona virus is another matter. There are many competing explanations — some of which can probably be dismissed out of hand. The latter include theories advanced by far-right patriots in China and the US about the deliberate release of new biological weapons by US military personnel or Chinese security agencies respectively.

In the cluster of more feasible scenarios, two stand out from the crowd.

One involves the accidental release of a viral sample from the Wuhan branch of the Chinese Centre for Disease Control and Prevention or from the nearby Wuhan Institute of Virology, or possibly a contraction of the virus by a staff member at one of these institutes who went on to infect others, unnoticed and unreported. Researchers at these facilities have been collecting and experimenting with bat corona viruses for some years and reporting their findings in international scientific journals, some as early as 2015. Writing in the Washington Post, David Ignatius offers a reliable account of this version of events.

A second plausible explanation involves the sale and consumption of bats or pangolins or perhaps other exotic wildlife at the Huanan Seafood Wholesale Market in Wuhan. Bats are known to carry a similar strain of corona virus to SARS-CoV-2. Microbiologists tell us that the viral strain found in bats would need to mutate through an intermediary animal host before it could infect human cells, and the most likely intermediate host appears to be the pangolin, a scaly ant-eater said to have been available for sale and consumption in the Huanan market.

The initial pattern of infections supports both explanations while favouring neither. The first reported cluster and fatality emerged among people who worked or shopped at the Huanan market, which was closed early in the outbreak on 1 January. The Centre for Disease Control and Prevention is located just 277 metres from the market, and the Wuhan Institute of Virology is situated nearby. As far as we know neither institution was closed in consequence of the outbreak. Nevertheless tracing an initial cluster to the vicinity of the market and the institutes could support either scenario.

From censored news reporting it is quite clear which of the two more plausible explanations is preferred by China’s party leadership. Few official sources have taken the laboratory version seriously and yet none to my knowledge has rejected accounts tracing the outbreak to the trade in wild game at the Huanan market.

The official Xinhua news agency reported research suggesting that genome sequences in samples taken from pangolins were a 99% match with those found among COVID-19 patients. This later turned out to be incorrect. Still, the outpouring of official statements denying evidence of human-to-human transmission that flowed over a period of six weeks, from 1 December through 14 January (when WHO publicly echoed Beijing’s claims) together implied that all who contracted the disease did so through non-human vectors, presumably animals traded at the Huanan market before it was closed on 1 January.

Authorities in China finally acknowledged community transmission on 20 January when the epidemic was well underway. By then, they had also framed a consistent media position maintaining that tracing the source of the virus was secondary to managing the epidemic and could await an independent scientific inquiry. Early in April, 100 Chinese scholars — almost none of them scientists — published an open letter along these lines concluding “in the end we will all respect the final determination of scientists”.

While it strikes the right tone, this judgement is hardly reassuring to anyone familiar with the state of scientific inquiry in contemporary China. Earlier in his term, Party General Secretary Xi Jinping undermined the country’s capacity for independent evidence-based inquiry of any kind by declaring that all science was based on Marxism-Leninism-Mao Zedong Thought and, true to Mao, insisting that scientific inquiry must serve the party leadership.

It is not difficult to see why the communist party would want to suppress speculation linking the outbreak to viral research establishments in Wuhan. These institutes work to party directives under Beijing’s ten-year national science and technology plans, which are closely aligned in turn with national defence and security strategies. The national science and technology planning system leads ultimately to Xi Jinping as head of the military and party apparatus and is off limits to public inquiry.

If we concede that the culprit is a pangolin in the pantry rather than a bat in the laboratory, any link between pangolins and the party would seem at first glance to be tenuous. An ungainly looking creature with a long snout, around 38 centimetres long in its Chinese iteration, the pangolin is covered with tough scales that are valued for their medicinal qualities. In traditional Chinese medicine (TCM) the dried scales are used to treat a variety of nervous conditions in women and children, along with malarial fever and deafness.

And yet TCM is not quite the grass-roots cultural practice that it might appear to outsiders. It is deeply embedded in the party’s management of daily physical health in China, where it is allocated a respected place alongside evidence-based medical practice, or ‘Western medicine’ as it’s known in China. “Chinese medicine treats the basics, Western medicine treats symptoms” goes the saying. What’s more, TCM has the backing of Xi Jinping.

In China, it could be said, all roads lead to Beijing. On the home front Xi has silenced critics of TCM. Internationally, he has been its champion.

To the extent that pangolins and other exotic animals sold in China’s wet markets provide ingredients for TCM it is hard to see Xi Jinping escaping a degree of responsibility for the consumption of virus-carrying wildlife that could well have started a global pandemic.

TCM is a significant and growing source of revenue for China. According to CNN, China’s State Council has estimated the value of trade in TCM could well exceed 3 trillion yuan (US$430 billion) this year, a whopping 71% increase over 2017. Internationally, Beijing has been actively promoting TCM along the route of its Belt and Road infrastructure initiative where sales of TCM remedies are reported to have surged more than half between 2016 and 2017.

TCM is also a potent weapon in the party’s ongoing struggle with universal values and human rights. Beijing tends to view and portray human rights and values as a nasty concoction of false hopes and evil intentions brewed up by the CIA, CNN, the New York Times and other liberal media to promote the global hegemony of the West.

In place of universal values, Xi champions his own brew of national values blended with national folk science and culture. He is also building the propaganda platforms and communications infrastructure needed to deliver his concoction to homes throughout the world.

At the moment the corona virus was leaping from animal to human hosts under the Huanan market scenario, Xi attended a meeting to endorse TCM. On 25 October 2019 he told a national TCM conference in Beijing that traditional medicine “is a treasure of Chinese civilisation embodying the wisdom of the nation and its people”. According to Xinhua reports, he also endorsed “efforts to promote TCM internationally and fully develop its unique strength in preventing and treating diseases”.

At the time he was speaking, Xi had already succeeded in persuading foreign countries and international agencies to concede that the treasures of Chinese folk wisdom offered cures for many of the ills ailing the world. In 2016 he met with WHO Director General Dr Margaret Chan in Beijing. Dr Chan was reported in Nature magazine at the time as showing considerable sympathy for official recognition of TCM during her tenure as WHO director from 2006 to 2017.

In 2017 Xi Jinping visited Geneva where he met with WHO officials and promoted TCM medicinal practice. According to WHO’s report of the meeting:

“President Xi presented as a gift to WHO a statue highlighting acupuncture, a widely used form of traditional Chinese medicine. As he unveiled the bronze statue, President Xi described it as a replica of the first teaching model for medicinal practice.” 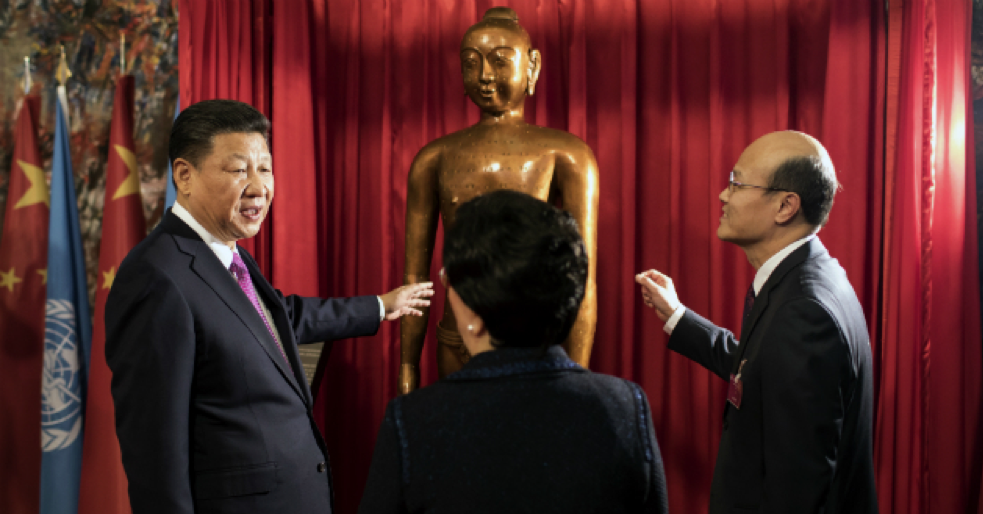 In September 2018, not long after Xi had paid his visit and Dr Chan had stepped down from her leadership role, the organisation signalled it would grant TCM recognition. In May 2019 the organisation’s governing body, the World Health Assembly, duly agreed to include a chapter on traditional medicines in its guide to acceptable global health practice, the International Classification of Diseases, an authoritative document that assists doctors around the world in diagnosing medical conditions.

John Fitzgerald is a China specialist and an emeritus professor at Swinburne University of Technology.