India, currently under 21-day lockdown, is fighting back against COVID-19 with a “cluster containment strategy” to contain the disease within a defined geographic area by early detection of cases, breaking the chain of transmission and thus preventing its spread.

The World Health Organization on Tuesday praised India for its tough and timely efforts to control the spread of coronavirus. There has been no community transmission of coronavirus since the country went into lockdown, and the growth factor of cases has declined by 40%, according to recent press briefings from the Union Health Ministry.

Most of the credit goes to the states that are aggressively fighting the battle with the virus. Here are five Indian states that are proactively coming up with innovative solutions to contain the deadly virus:

After successfully defeating the Nipah virus in 2018, Kerala has utilised this experience to contain the COVID-19 spread after a rather bumpy start. It was the first Indian state to register COVID-19 patients and topped the list at one stage. However, it has now managed to successfully flatten the curve. Out of a total 376 cases, 179 have recovered and three have unfortunately died. Active cases remain at 176.

What has worked for Kerala is its extensive testing of symptomatic cases, followed by a painstaking​ contact-tracing process and​ then​ publishing of the route map of an infected person, so that everyone with the potential to being infected ​could be put in self-isolation.

Krishna Teja, an Indian Administrative Service (IAS) officer working with the Kerala COVID-19 response team, said: “The reason why we have successfully been able to flatten the curve is because of excellent inter-department coordination at all levels (state, district and village panchayats). Moreover, our chief minister addresses the citizens every evening for an hour which establishes people’s faith in the system. Also, we are 100% checking the quarantine period by deploying officers to go to every household.”

The state has further managed to control movement of migrant workers by building thousands of shelters following the sudden nationwide shutdown and distributing millions of cooked meals.

The government is also leveraging technology and releases essential information on a real-time basis and has launched a mobile app, GoK Direct, to check the spread of fake information. The state also started a “walk-in facility” for people to get tests safely.

To combat the #coronavirus pandemic, Kerala has undertaken various initiatives including an INR 20,000 Cr package aimed at overcoming the economic impact of #Covid_19 & GoK Direct app to track the coronavirus updates! #WarAgainstVirus #CoronavirusOutbreakIndia 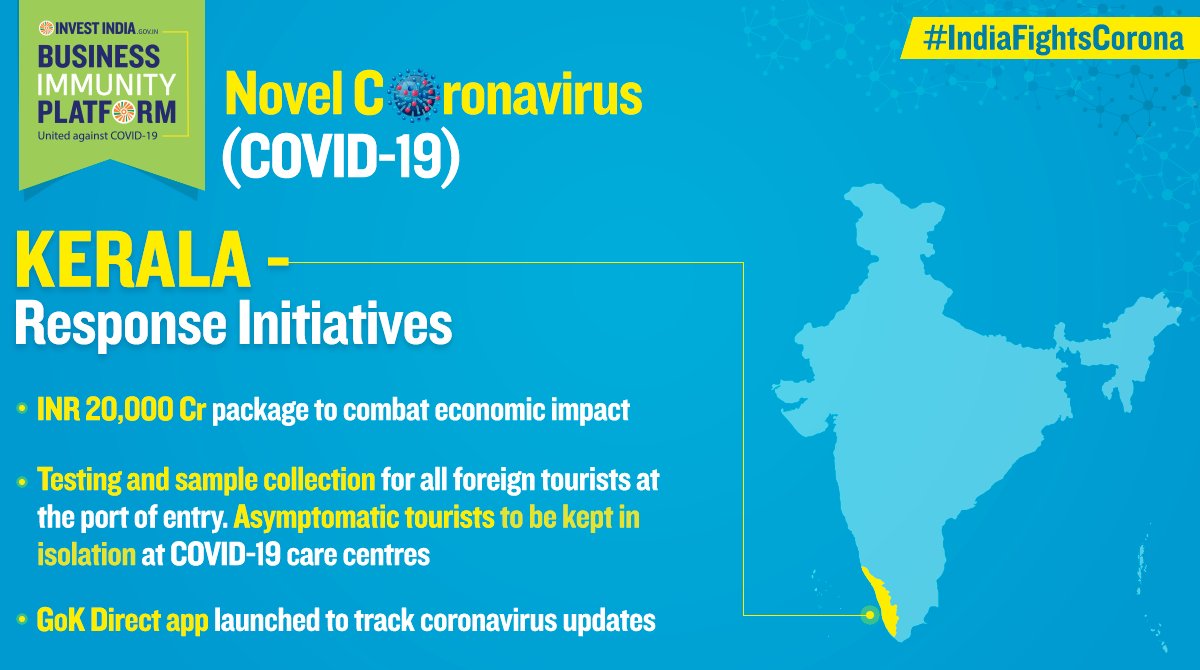 Furthermore, an initiative called the CoronaSafe Network has been created, with two major components: the Corona Literacy Mission and the Corona Care Centre to create awareness on COVID-19 and for converting educational institutions into hospitals to offset for shortages.

This eastern state of India suffers nearly 25% of India’s natural disasters, which means that crisis precautions were already in place. These included cyclone shelters, now being used to house migrant workers from other states during the coronavirus outbreak.

Proactive preparedness is Odisha’s hallmark, with it becoming the first Indian state to impose full lockdown (before India imposed it as a whole), and now the first to extend it until 30 April. The state classified COVID-19 as a natural disaster, like the super-cyclone of 1999. It was the first to announce exclusive COVID-19 hospitals and delivered them within a week in two districts; now every district will have one. The state is further giving free medical treatment to all COVID-19 patients.

Status of #COVID19 positive cases in #Odisha as on 13th April. #OdishaFightsCorona 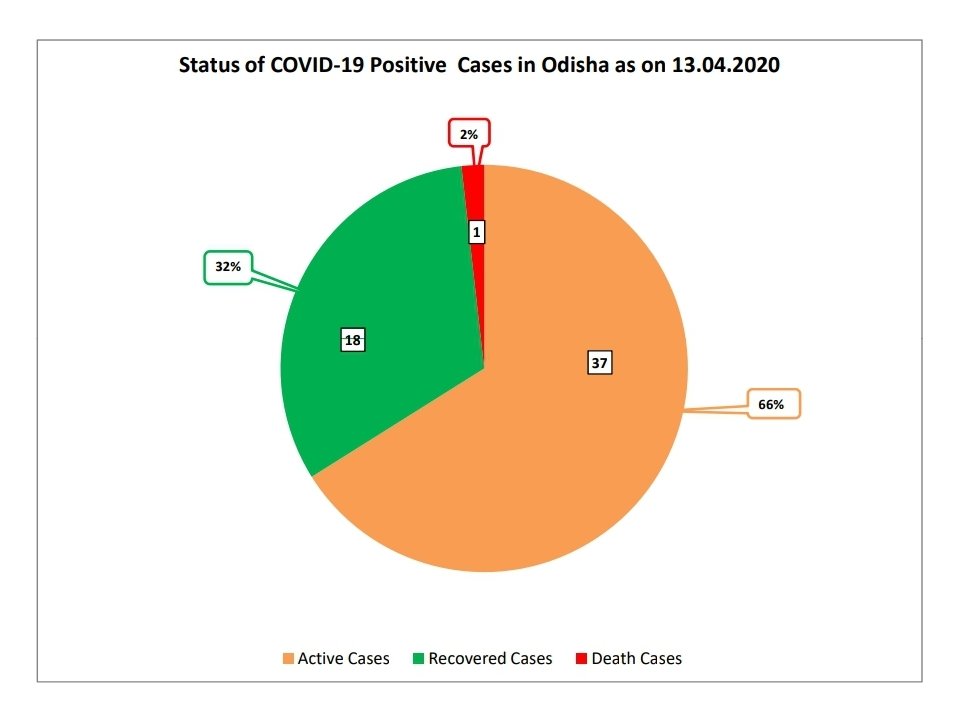 Regarding the challenges, Chief Secretary of Government of Odisha, Asit Tripathy, said: “We were lucky to have the experience of countries like Italy before us. We saw the unintended catastrophe that happened in countries where they treated COVID patients in regular hospitals along with other patients. Therefore, our government moved very early to establish exclusive Odisha COVID hospitals across the state. We made a plan by inviting and involving private hospital operators and also corporates.”

The state’s containment programme was rooted in strategic use of IT. It identified the highest-risk category people coming from abroad in order to put them in home quarantine to stop the spread. Leading the country, Odisha devised an incentive program by offering INR15,000 for all foreign returning people to declare themselves on a government portal developed within 11 hours. According to the state’s IT Secretary, Manoj Mishra, over 5,000 international returnees and also about 35,000 domestic returnees from COVID-19-affected states registered and were asked to home quarantine.

The government put the five most reported districts on lockdown first on 22 March. This also helped the state to have a control over the quarantine mechanism and so far according to the state’s Health and Welfare Department, Odisha has recorded 60 cases (out of which 18 have recovered).

Odisha, too, has created thousands of temporary shelters for migrant workers and is providing cooked meals and counselling to all those in need. According to Subroto Bagchi, regional government spokesperson, 1,882 temporary camps have been set up to provide food and shelter to 56,926 guest workers from different states stranded due to the 21-day nationwide lockdown.

Meanwhile, the state’s Mission Shakti Self Help Groups (SHGs) are making masks in bulk to avoid any shortage (wearing them outside is now mandatory). According to Sujata Karthikeyan, Director of Mission Shakti, around 605 SHGs have made 1.5 million cotton masks so far, helping protect the community and medics. More than 7,000 SHGs are working day and night to produce protection gear for those on the frontlines and also running village panchayat-level kitchen centres to cook meals for those in need: so far over 325,000 people.

The government further paid out advance social pension of four months to around 2.8 million beneficiaries.

Maharashtra currently leads the table of COVID-19 positive cases with 1,872. The state has come up with a cluster containment plan to deal with the contagion and is using data analytics, drones and traditional patrolling methods to survey crowded places.

In every district, two to three drones are used to monitor movements within streets. A drone can cover a kilometre area once deployed. So it will give an aerial view of, for example, Mumbai’s Marine Drive, show the arterial roads, then move into the lanes and bylanes, making movement tracking people simpler. If the police spot anybody roaming in these areas, a team is immediately dispatched to take action. The state has further started mass patrolling, reinforcing the message to stay inside.

However, according to Milind Deora, former Minister of State (MoS) with the Ministry of Communications and Information Technology and also former MoS with the Ministry of Shipping within the government of India, the situation in Mumbai is still extremely worrying. “The next few weeks are crucial. The response requires a multi-pronged approach wherein inputs from medical experts, essential goods suppliers and industry should also be factored. Leaving our response only to politicians and bureaucrats can do more harm than good,” he said.

The Bhilwara district of Rajasthan, once the worst affected by COVID-19 with 27 cases and two deaths, is now being hailed as a model for the rest of the country. It has gone into a full lockdown backed with curfew, and the entire population went into health screening.

During the ongoing lockdown, there is no relaxation of any type, and essential items are being delivered to city residents at their doorstep; something made easier by an affluent population in the city that can afford to pay for it.

As a result, the textile hub has not reported a new case of COVID-19 since 30 March. Of 27 total cases, 17 have already recovered, bringing the number of active cases in Bhilwara to just 10.

The Bhilwara model is being replicated in other districts of Rajasthan and has received praise from the entire country. The man in charge, District Magistrate of Bhilwara Rajendra Bhatt, said in an interview to The Print: “The success was not rocket science. We got full cooperation from the state government. When we (at the district level) said that we need to seal the border, the government did it immediately – no questions asked. Before announcing the complete curfew, we sent our people to dairies, surveyed how much milk each household is consuming so that when we imposed the curfew, all we had to do is deliver an average amount to each house… Again, it was no rocket science.”

The state has further banned spitting in public.

India’s most populated state with over 200 million people, Uttar Pradesh has managed well to keep the cases below 500 (451 at the time of writing). The state has further sealed all the 160 hotspots completely.

Uttar Pradesh had no laboratory to test the Sars-CoV-2 pathogen when the first positive case was reported on 3 March; it now has 10. The state government has established a Covid Care Fund, and is getting support from public representatives and the general public. The money is being used to expand testing and treatment facilities; 2,400 tests are being done daily. The government is already working to boost the manufacturing units of PPE, N95 masks, triple-layer masks, thermal analysers, ventilators and other equipment.

The state administration is making sure to provide food to all with the help of two platforms – Annapurna and Supply Mitra. The former gives location of free cooked items and food packets, while the latter is used to facilitate home delivery of groceries and other daily essential items, by providing the operating details of the traders and delivery boys involved.

The state government is already providing one-month free food grains to poor people, along with INR1,000 as compensation to daily wage workers who have been affected due to the outbreak of deadly virus. More than 37,000 labourers registered with the labour department will be compensated through a DBT (Direct Benefit Transfer) scheme. People with old-age or disability pensions will be given two months’ advance.