Yesterday, South Korea’s Centres for Disease Control and Prevention’s (KCDC) announced that, with just four imported cases confirmed on 29 April, “for the first time since 18 February (the 31st confirmed case), no confirmed case was reported in the community level”.

Additionally, The Straits Times report that the country of 51.64 million people managed to hold a parliamentary election with no local transmission; while the country created new options for patients in hospital and those self-isolating, infections at in-person voting booths were apparently suppressed through disinfectant teams, social distancing of 1 metre, and requirements to wear masks and plastic gloves when casting ballots.

“Twenty-nine million voters participated in the April 15 parliamentary election… Not one case related to the election has been reported during the 14 days of incubation period,” Mr Yoon Tae-ho, director general for public health policy, told a briefing.

How South Korea nipped COVID-19 in the bud

From the start, South Korea drew early praise for extensive tracking and tracing programs — which included drive-through tests — a transparent and widespread communication campaign, all-level political cooperation, and social-distancing measures that have meant that, with the exception of a temporary closures of some schools and businesses, the country has not enforced complete lockdowns.

But that patient “31”, alluded to in the KCDC briefing, is significant; according to the World Economic Forum, they acted as a “super-spreader” throughout churches, malls, and hospitals in the days leading up to confirmation on 18 February — despite showing symptoms — and helped create a surge concurrent with the early outbreaks in Iran, Italy and Spain.

As Crikey explained last week, the country then followed a relatively similar trajectory to Australia — just four-to-six weeks ahead of us — using the same testing, tracing, and quarantine measure, the major differences being:

Additionally, The Strategist explains how authorities relied on mobile-phone GPS data, credit card transaction records and CCTV footage to enact contact tracing, while local governments both quarantined potential carriers and publicly disclosed individual travel histories to inform nearby residents; this has led, understandably, to some backlash, as individuals may have faced public shaming. Project Syndicate explains how those civil groups, including non-governmental organisations and trade unions, have pushed for checks and balances on private data and further pressured the government to look after vulnerable groups, such as refugees.

Still, after slashing the outbreak from a maximum of rate of 909 new cases on 29 February to below 100 within a fortnight, President Moon Jae-in ruling party swept the 15 April election.

“Mr Moon, who came to power based on a promise of historic peace on the Korean peninsula and economic justice amid rising inequality, faced the greatest crisis of his career. Instead of blaming people for its failures, however, the government responded with decisive measures, including unprecedented drive-through mass testing facilities, specialised software and drones-based contact tracing and monitoring mechanisms, and an all-out public information campaign.”

Now, as cases dry up and the KCDC determines epidemiological links for 80.5% of the total cases 10,765 — 9.6% of whom are either under investigation or sporadic cases — the body plans to ramp up serological studies to check “herd immunity” and determine transmission trends. Additionally, “the use of blood samples collected through Korea National Health and Nutrition Examination Survey and antibody test in the Special Management Regions are under consideration”.

On the testing front, Inquirer reports that a clinical expert panel concluded earlier this week that the 292 people who tested positive again after having already recovered from the virus were not “reactivated” or reinfected, but were false positives due to technical limits in testing.

Finally, ahead of an upcoming long holiday weekend, the KCDC has issued the following guidelines:

Does Sweden’s “trust” gamble paint a warning for the new normal?

According to the World Economic Forum, Chief Executive Director of the WHO’s Emergencies Programme Michael J. Ryan has used the latest briefing to emphasise the role of public trust in Sweden’s relatively-lax approach to suppressing the virus.

The country has drawn headlines for bucking the lockdown trend — as The New York Times reports, while gatherings of more than 50 people are banned, restaurants and bars have remained open — Ryan says the country has ensured healthcare capacity by ramping up intensive care units, implementing physical distancing measures, and building key protections into long-term care facilities.

The focus on public trust, Ryan argues, could act as the “new normal” template for countries coming out of lockdown measures:

“What it has done differently is it is very much relying on its relationship with its citizenry. It really has trusted its own communities to implement that physical distance… If we are to reach a new normal, in many ways Sweden represents a future model.”

However, Ryan notes, it “remains to be seen whether” Sweden’s approach works, and the country’s curve shows no sign of slowing.

As a CNN comparison of neighbouring countries that opted for earlier and stronger measures — Denmark, Norway and Finland — demonstrates, Sweden’s recorded a far higher per capita infection and death rate. 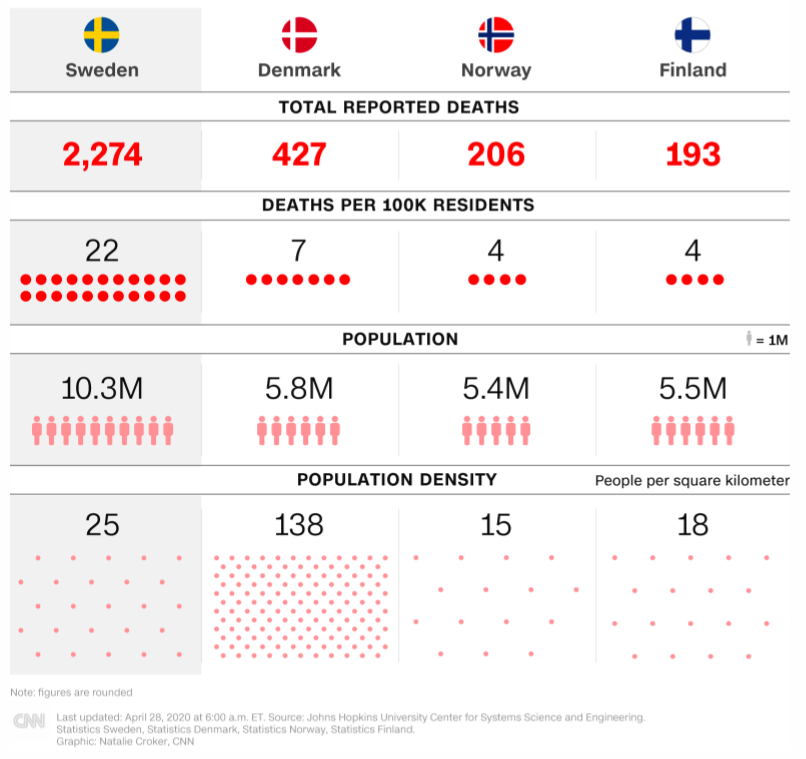 While Sweden’s leaders have shown regret over the spike in deaths — specifically amongst nursing homes — and rejected aiming for a “herd immunity” strategy, state epidemiologist Anders Tegnell believes the country will still be better prepared for any second wave.

Additionally, in that much more comprehensive CNN report, a professor in the Department of Microbiology, Tumor and Cell Biology at the Karolinska Institutet, Jan Albert, argues that herd immunity is ultimately “the only thing that will eventually stop this, unless there is a vaccine in time, which is quite unlikely”:

Stricter lockdowns “only serve to flatten the curve, and flattening the curve doesn’t mean that cases disappear — they are just moved in time. And as long as the healthcare system reasonably can cope with and give good care to the ones who need care, it’s not clear that having the cases later in time is better.”

Still, while it may take months or even years to gauge the long-term effectiveness of early lockdowns, you only need to look at Tagesspiegel’s comparison of EU countries to see Sweden, on a per-capita basis, is closer to Italy’s death rate than its immediate neighbours’.

On the home front: The NT’s ‘Roadmap to the New Normal’, the North West Regional Hospital outbreak interim report, SA testing and vaccine blitz and more

Yesterday, the Northern Territory government launched the ‘Roadmap to the New Normal‘, a three-stage plan detailing the next month of restrictions adjustments. The government notes that milestone dates are “indicative only” and dependent upon both zero community transmission and people complying with physical distancing and hygiene practices.

Stage One — to commence noon today, Friday 1 May

Today’s adjustments will focus on “simple and safe outdoor activities where physical distancing can be maintained at all times’, and will allow the following:

These measures will allow “safer indoor activities for less than two hours,” such as:

Venues will also be required to complete a COVID-19 safety plan checklist to ensure they operate within physically distancing and hygiene guidelines, to be made available from 5 May. The government notes this will not create a new approvals process, that businesses will be able to complete and submit the checklist prior to opening, and that health officers will make subsequent compliance checks.

By 5 June, all territory businesses, services, facilities and organisations should reportedly have their own COVID-19 safety plan.

The final stage will see the two-hour time limit removed and restrictions eased on further indoor activities, including:

The government notes the changes will also apply to communities within designated biosecurity areas.

Looking ahead, the territory’s internal border controls under the Commonwealth Biosecurity Act are due to expire on 18 June, and the territory government notes that — while existing border security and quarantine arrangements will not change — the decision on whether to lift internal controls will be made in partnership with the federal government, land councils and communities – and based on the health advice.

Yesterday, the Tasmanian government released Public Health Services’ 28-page North West Regional Hospital Outbreak Interim Report, which found hospital staff worked while sick and suggests the original source of infection for the hospital was most likely to have been one (or both) of “two inpatients who were admitted to the NWRH with COVID-19 acquired on a cruise ship, the Ruby Princess.”

Further, it was likely that by the time those cases were diagnosed, there was already community transmission within the hospital.

As health minister Sarah Courtney announced on the document’s launch, the government has accepted all recommendations and tasked the Secretary with developing an implementation plan.

For more in-depth explanations, read the report itself.

Courtney notes that some recommendations already being actioned include enhanced staff screening, improving PPE training and communication for staff, and clarifying return to work processes on a statewide basis, while others will take progressively longer to implement — presumably, this include Recommendation 11, understanding and working to alleviate the reasons some health staff present to work while sick.

Yesterday, South Australia hit 57,389 virus samples taken, reportedly the highest per capita tests in the country, at more than 3.2%, and even triple Western Australia’s testing rate of 1.4%. The government announced the “blitz” will now be expanded “ongoing for anyone with cold or flu-like symptoms, no matter how mild, and expanded to include anyone with unexplained loss of taste or smell.”

Separately, the government passed legislation expanding the ‘No Jab, No Play’ policy, which now excludes children up to the age of six from early learning services who have not been fully vaccinated from early August, with health minister Stephen Wade announcing:

“The lack of a vaccine to protect against COVID-19 event has highlighted just how important it is to vaccinate against dangerous diseases we can prevent.”

In other state news: 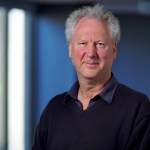 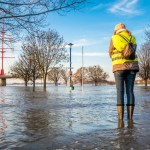 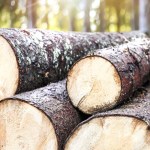 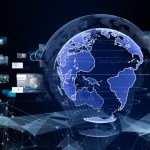 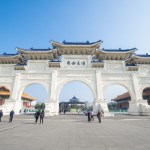 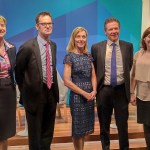 How to change the world with HR: tips on taking people management to the next level from the new APS head of profession and her corporate-affairs counterparts