Modern technology affects different workers in different ways. In some white-collar jobs — designer, engineer — people become more productive with sophisticated software at their side. In other cases, forms of automation, from robots to phone-answering systems, have simply replaced factory workers, receptionists, and many other kinds of employees.

Now a new study co-authored by an MIT economist suggests automation has a bigger impact on the labor market and income inequality than previous research would indicate — and identifies the year 1987 as a key inflection point in this process, the moment when jobs lost to automation stopped being replaced by an equal number of similar workplace opportunities.

Within industries adopting automation, the study shows, the average “displacement” (or job loss) from 1947-1987 was 17% of jobs, while the average “reinstatement” (new opportunities) was 19 percent. But from 1987-2016, displacement was 16%, while reinstatement was just 10 percent. In short, those factory positions or phone-answering jobs are not coming back. 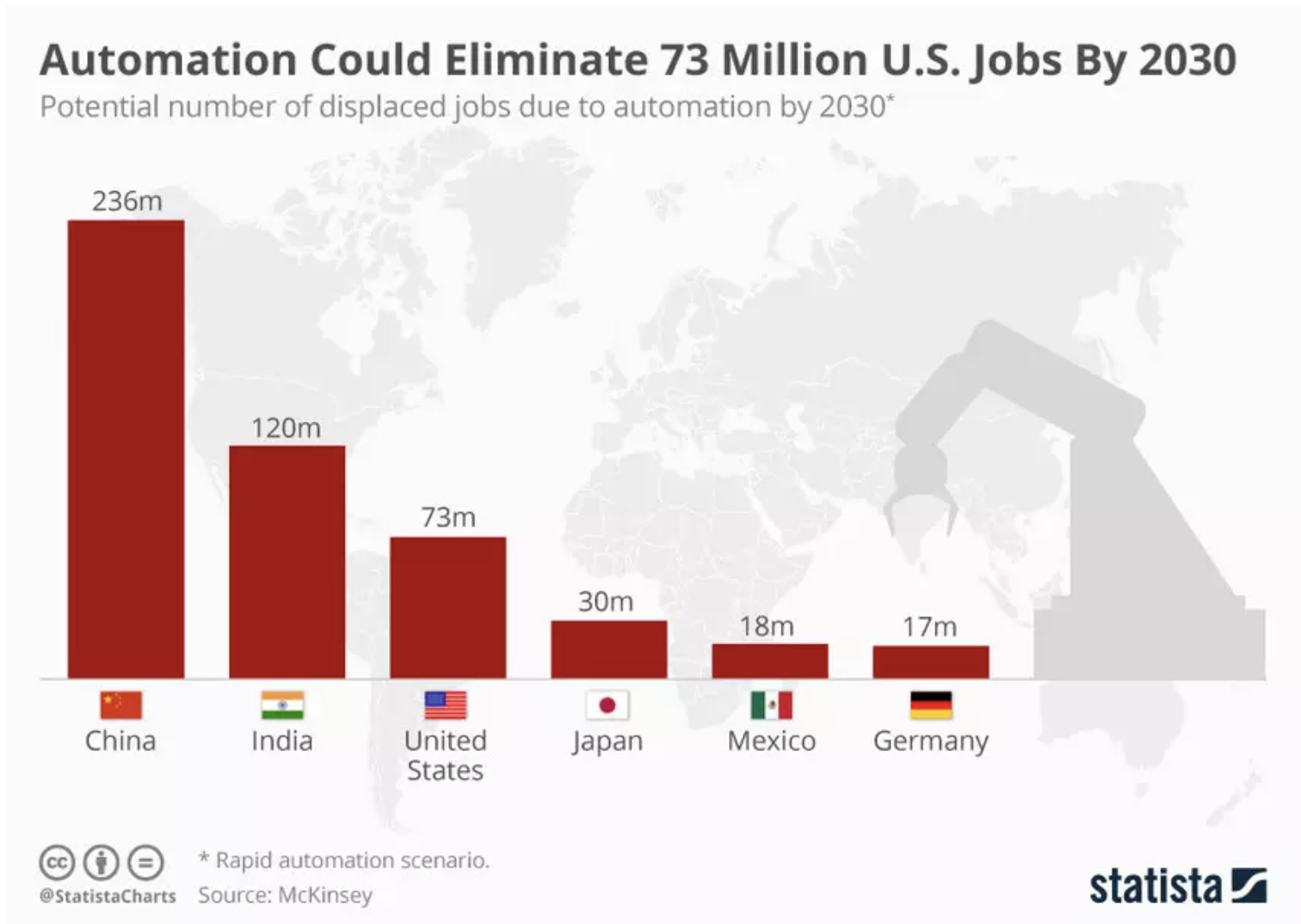 The new paper, “Unpacking Skill Bias: Automation and New Tasks,” will appear in the May issue of the American Economic Association: Papers and Proceedings. The authors are Acemoglu, who is an Institute Professor at MIT, and Pascual Restrepo PhD ’16, an assistant professor of economics at Boston University.

The new paper is one of several studies Acemoglu and Restrepo have conducted recently examining the effects of robots and automation in the workplace. In a just-published paper, they concluded that across the U.S. from 1993 to 2007, each new robot replaced 3.3 jobs.

In still another new paper, Acemoglu and Restrepo examined French industry from 2010 to 2015. They found that firms that quickly adopted robots became more productive and hired more workers, while their competitors fell behind and shed workers — with jobs again being reduced overall.

In the current study, Acemoglu and Restrepo construct a model of technology’s effects on the labor market, while testing the model’s strength by using empirical data from 44 relevant industries. (The study uses U.S. Census statistics on employment and wages, as well as economic data from the Bureau of Economic Analysis and the Bureau of Labor Studies, among other sources.)

The result is an alternative to the standard economic modelling in the field, which has emphasised the idea of “skill-biased” technological change — meaning that technology tends to benefit select high-skilled workers more than low-skill workers, helping the wages of high-skilled workers more, while the value of other workers stagnates. Think again of highly trained engineers who use new software to finish more projects more quickly: They become more productive and valuable, while workers lacking synergy with new technology are comparatively less valued.

However, Acemoglu and Restrepo think even this scenario, with the prosperity gap it implies, is still too benign. Where automation occurs, lower-skill workers are not just failing to make gains; they are actively pushed backward financially. Moreover, Acemoglu and Restrepo note, the standard model of skill-biased change does not fully account for this dynamic; it estimates that productivity gains and real (inflation-adjusted) wages of workers should be higher than they actually are.

“Productivity growth has been lacklustre, and real wages have fallen,” Acemoglu says. “Automation accounts for both of those.” Moreover, he adds, “Demand for skills has gone down almost exclusively in industries that have seen a lot of automation.”

Why “so-so technologies” are so, so bad

Think of a self-checkout system in your supermarket or pharmacy: It reduces labor costs without making the task more efficient. The difference is the work is done by you, not paid employees. These kinds of systems are what Acemoglu and Restrepo have termed “so-so technologies,” because of the minimal value they offer.

“So-so technologies are not really doing a fantastic job, nobody’s enthusiastic about going one-by-one through their items at checkout, and nobody likes it when the airline they’re calling puts them through automated menus,” Acemoglu says. “So-so technologies are cost-saving devices for firms that just reduce their costs a little bit but don’t increase productivity by much. They create the usual displacement effect but don’t benefit other workers that much, and firms have no reason to hire more workers or pay other workers more.”

To be sure, not all automation resembles self-checkout systems, which were not around in 1987. Automation at that time consisted more of printed office records being converted into databases, or machinery being added to sectors like textiles and furniture-making. Robots became more commonly added to heavy industrial manufacturing in the 1990s. Automation is a suite of technologies, continuing today with software and AI, which are inherently worker-displacing.

“Displacement is really the centre of our theory,” Acemoglu says. “And it has grimmer implications, because wage inequality is associated with disruptive changes for workers. It’s a much more Luddite explanation.”

After all, the Luddites — British textile mill workers who destroyed machinery in the 1810s — may be synonymous with technophobia, but their actions were motivated by economic concerns; they knew machines were replacing their jobs. That same displacement continues today, although, Acemoglu contends, the net negative consequences of technology on jobs is not inevitable. We could, perhaps, find more ways to produce job-enhancing technologies, rather than job-replacing innovations.

“It’s not all doom and gloom,” says Acemoglu. “There is nothing that says technology is all bad for workers. It is the choice we make about the direction to develop technology that is critical.”

Peter Dizikes is a writer for MIT News Office.