I could have skipped a stone across the Pacific Ocean. The world had shrunk so small that the body of water between Australia and America was a large pond and New Zealand was a sand bank on the surface. While my grandmother took weeks to cross the Indian Ocean by boat, making the treacherous journey from India to Uganda in the 1960s, we now live in an age where air travel is nothing to write home about.

Camping under the stars has been replaced by weekend getaways to Bali and Fiji, Skyscanner and Webjet now filling our inboxes with spam. Credit card ‘arbs’ are commonplace with most young professionals using their credit cards for frequent flyer points, the 55 days of free interest simply a side dish to the main meal of trips around the world, upgrading to first class and club lounges. Pack a bag and pick a place – the world was my oyster. Travelling had become synonymous with coming of age, so much so that when Australia shut up shop, closed its doors, and those great big iron birds of the sky lay parked on runaways around the world, the inability to do so caused a visible rift in our social fabric. For many Australians it was the inability to go down to your local pub and get a parma or have a BBQ at the beach before summer ended. But for young people, it is also the restriction from leaving our very big island with a literal moat around it with no end date.

Travelling was the world’s greatest teacher. She had tested my strength when I got lost on the west side of the Chao Praya river in Bangkok with no map and no WIFI. She questioned my judgement as I ate waterbugs and bamboo worms, got food poisoning in New York and found myself buying expired gatorade in Chinatown to hydrate. She taught me to say I love you in many many languages and see that love – love has no boundaries in race or creed and can be found in the smallest of places. The tyranny of distance was no match for my romantic heart. And most of all, she taught me that the world was just one big village. They say it takes a village to raise a child. Well, the world and all its city lights and fireflies and nights of being lost and bumping into strangers who become friends, this was my village.

As our borders remain closed, for very valid reasons, as we stay home to save lives – it begs the question – what does it to mean explore the world in 2020? What does it mean to be 28 – to find that a world which seemed so small is now suddenly a lot larger than you thought? I thought I could fall in love across the world and cross the continents in one giant stride. I thought I could plan holidays a year away and my biggest concern was my purchased leave policy. Living in Melbourne with my family in Auckland was easy, with four-hour flights making weekend trips back to New Zealand a hop skip and a jump. Who knew it might be a year before I see my grandmother again?

Like Alice falling down a rabbit hole, drinking from one bottle to grow larger, and from another to grow small again, it seems like our perception of the world has been altered with our inability to travel it. Despite our relative geographic isolation, other countries seemed accessible if you had privilege of being able to afford to travel and the passport to allow it. I’m under no illusions, I realise that travelling was still a luxury for many in the world, yet it was something most middle- class young professionals in their 20s could afford, and to a large extent, defined us as a generation. Even as borders remain closed, I find myself stuck in a pre-COVID19 existence, learning Spanish on Duolingo, for ‘when borders open and we can travel again’. It appears that my vision of the future has yet to adjust to the reality that travel in 2021 will be very different to what we knew of it.

We are the generation who travel, the generation who don’t buy houses until later, if at all, and spend our money on overpriced coffees and scratch maps of the world as we strike off another exotic location on our bucket list. We are the generation that drank from a bottle and watched the world shrink, letting us traipse across the globe on adventures, forming relationships and friendships across the world. A generation that was connected across borders. And we are the generation who lost it all as the world grew large again, and like Alice, we find ourselves shrinking within our new confines to make ourselves fit into this new way of living. We grew up with travel as a way of life and are now trying to redefine what it means to be us, if we can no longer travel the way we used to. I no longer know if the world is big or small anymore, but I for one, hope that in stepping through the looking glass, one day we can still have the connections we used to – across oceans, across borders, across race and creed. The connections that travel had brought us.

Anushka Britto is a day-time auditor, night-time philosopher and writer who lives in Melbourne. 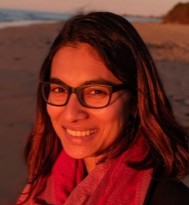