The coronavirus pandemic has led to widespread job losses across most advanced economies, as governments have mandated ‘lockdowns’ in an effort to stop the spread of the disease. No country has managed to avoid rising unemployment. To cushion the blow, governments have pumped large amounts of money – several per cent of GDP – into labour market policies. The UK government, for example, is expected to spend over £80 billion (or 3.7% of annual GDP) on such policies over the next eight months. But the approaches taken have differed, and the policies chosen appear to have had important consequences for workers.

Some countries have experienced large increases in unemployment, while others have sustained links between employers and employees, even though all have experienced large economic contractions. This is hugely important, both for assessing the effectiveness of policies so far and in thinking about the task ahead as governments attempt to release the lockdown restrictions and get their economies going. This paper compares the experiences of five countries that illustrate how different policy decisions have been associated with different labour market outcomes, setting up very different future challenges.

Australia, Canada, Ireland, the UK and the US have all experienced a huge economic shock. In the first four of these countries, a third of the workforce or more is now having their income fully paid or heavily subsidised by the government – equivalent figures are not available for the US. But the types of policies that each country has adopted, and their resulting unemployment numbers, look very different from one another. In all of these countries, the state is now paying much more to support people’s incomes than before the crisis. 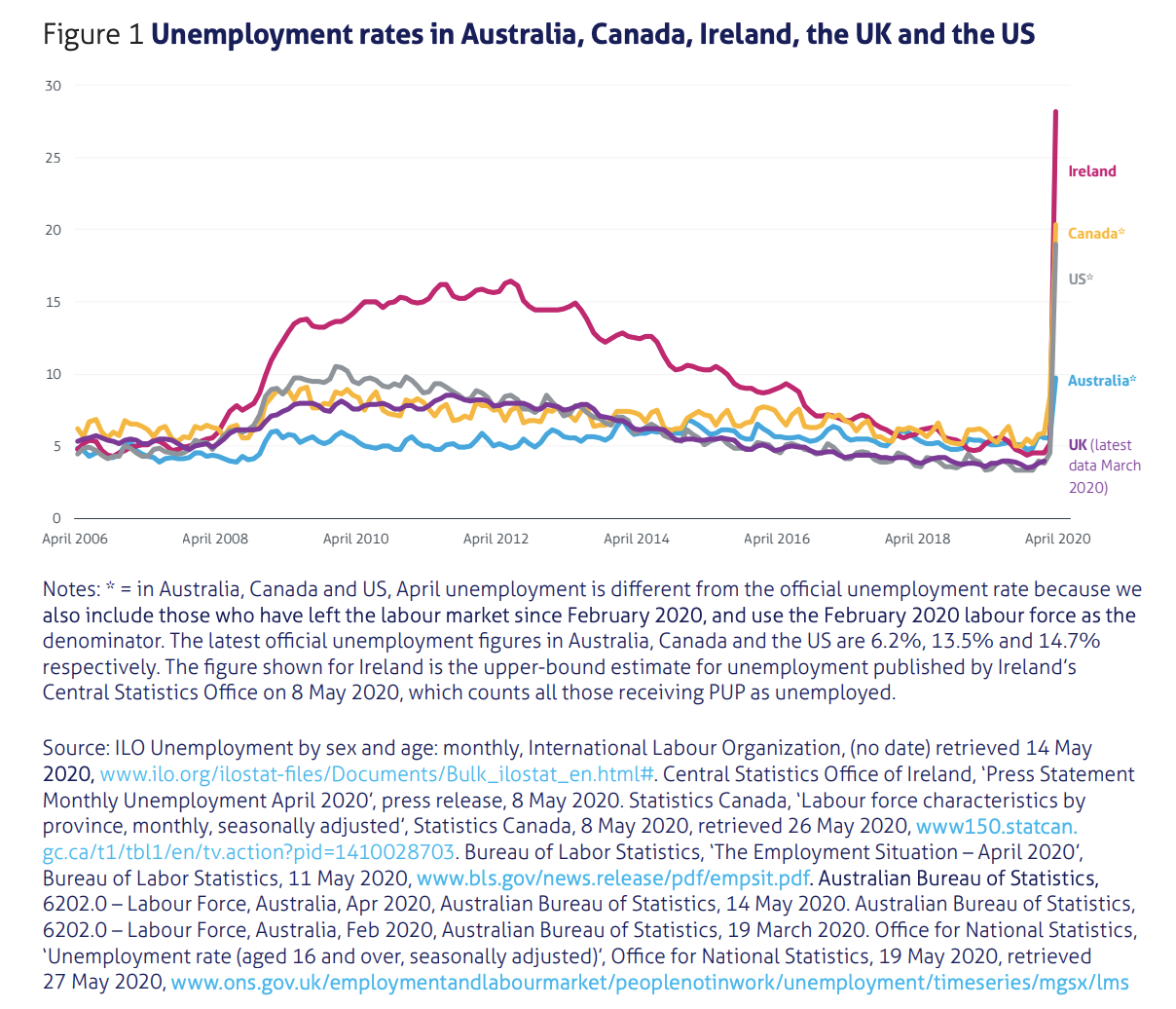 All five countries have experienced a large increase in unemployment, as Figure 1 shows. But in some, the increase has been much more dramatic than in others. Unemployment has increased much more in Canada, Ireland and the US than in Australia and the UK. This is because the governments in Canada, Ireland and the US channelled much more of their labour market support through enhanced unemployment benefits than Australia and the UK did – the latter two countries instead focused support through wage subsidy schemes. However, the precise details of the schemes and when they were announced also appear to have been important in determining how far and how fast unemployment has increased:

This paper shows that policy has been influential in affecting labour market outcomes during this crisis. If the goal of policy was to support incomes while retaining employer–employee links, it seems as though Australia and the UK have, so far, been more successful than Canada, Ireland and the US. But it is too soon to know what ‘good’ policy looks like in this unprecedented crisis. If people whose wages are currently being subsidised by the government are laid off when that support is withdrawn – as the UK government is suggesting it will begin to do from the start of August – then UK and Australian unemployment may end up looking very similar to the other countries. At the same time, it is also possible that unemployed workers (including those who make up such large numbers in the other three countries in our study) will be quickly re-hired by their old employers, with existing employer–employee links surviving temporary unemployment.

One implication of the different patterns of unemployment we have seen to date is that the adaptations governments will need to make to these policies — to support the economic recovery as lockdown restrictions are eased — differ. In the UK, the key will be ensuring wage subsidy schemes do not hamper the recovery by discouraging businesses from re-hiring workers. Both the UK and Australia also risk discouraging workers from moving to employers and sectors with better prospects, by offering generous incentives for employees to be retained. In Ireland, Canada and the US, the priority will instead be ensuring unemployed people re-enter work, either returning to their old job or to new ones, rather than becoming disengaged from the labour market.

This article is an extract from the UK Institute for Government’s report Coronavirus and unemployment, the importance of government policy: a five nation comparison.