If you’ve seen a wind farm in action, you know modern wind turbines are pretty awe-inspiring — hulking giants all in a row, massive blades turning in the barest breeze. In the last few decades, turbine heights have more than tripled to go after greater gusts at higher altitudes, and they’ve sprouted rotors long as football fields to more efficiently catch all that energy.

The taller the turbine and the bigger its blades, the more electricity it can produce. But this only makes sense to a point — and that point is defined by simple economics.

In recent years, the trend toward taller wind turbines, in particular, has plateaued. Limited by manufacturing, labour, and transportation challenges, current technologies have faced some stiff headwinds. Which is why GE is looking to the future to break the stalemate. The company thinks 3D printing can double the height of its turbines without breaking the bank.

The company said this week that they’re working with partners COBOD and LafargeHolcim to engineer giant 3D printers that can print concrete turbine bases on site. The final design would be a hybrid, with the concrete base supporting a steel tower and turbine. The group completed a prototype base in fall 2019 and is aiming for production in 2023.

At 200 meters tall, the new turbines would dwarf today’s 80-meter models and would even look down on Seattle’s Space Needle. It’s hoped these gentle giants can further drive down the cost of wind power and maybe even spread it to less breezy locales.

The tradeoffs with taller turbines

It’s well-known things get gustier the higher you go. A National Renewable Energy Laboratory (NREL) analysis found wind speeds in much of the US, especially in the eastern half, are up to 6 miles per hour greater at heights of 160 meters compared to 80 meters.

The height of highway overpasses, for example, is a key limiting factor. Because you need a wider base to support a taller turbine, beyond a certain tower height, the bases are too wide to be driven from factory to wind farm. You could build bases on site by assembling pre-cast concrete pieces or making molds and pouring the concrete there. But whichever method you favour, it’ll take more labour, time, and money. At some point, the added expense outweighs the extra energy a taller turbine can harvest.

According to the NREL report, current technologies may be able break the economic bottleneck, but none are an obvious silver bullet. The authors, however, do mention that 3D printing concrete bases on site, while not yet proven feasible, could solve many of these problems. Much of the process, for example, would be automated, requiring less labor and time.

No surprise then that GE, one of the biggest wind turbine makers in the world and a manufacturing titan with 3D printing experience, figures the technology is worth a shot.

If we can 3D print a house…

At peak hype, desktop 3D printers got all the love, even though affordable machines mostly maxed out at the fabrication of plastic tchotchkes. Industrial 3D printing, on the other hand, has been making greater strides. Large industrial 3D printers can whip up rockets and houses. And the latter are, obviously, most relevant to GE’s wind turbine work.

GE will likely print their turbine bases using similar techniques. Their prototype base, printed last October in Copenhagen, is 10 meters tall and was printed layer by layer, its two walls joined together by a sinuous line of concrete layered into the middle. 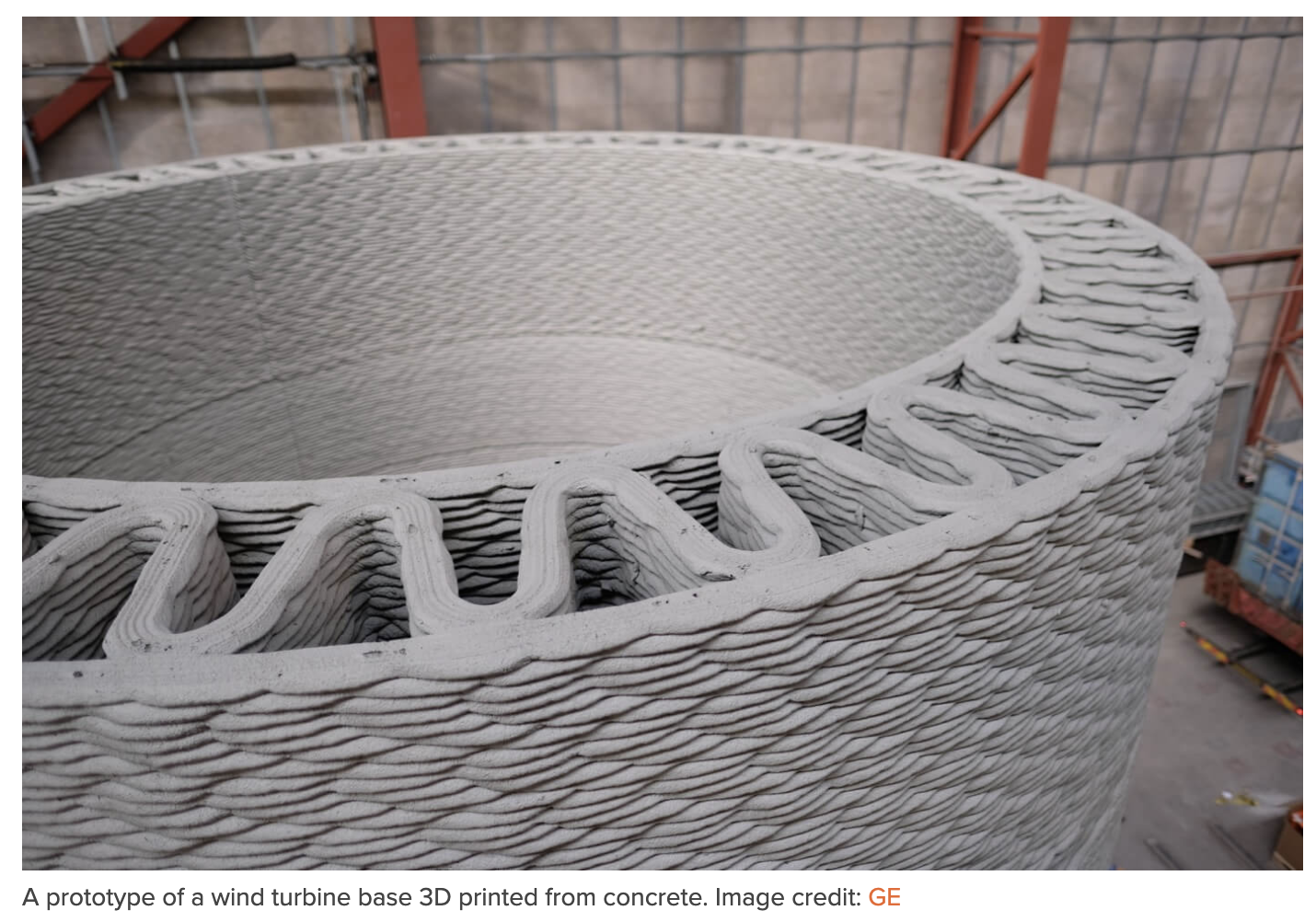 GE will design the wind turbines, COBOD will build the 3D printer, and LafargeHolcim will make a proprietary blend of concrete for the job. In the next few years, the group hopes to finish a full-scale wind turbine prototype with 3D printed base, a production printer, and enough materials to scale. If it all works out, the new turbines could produce as much as 33 percent more power and become practical in more places.

“What you’re looking at is a technology that enables the industry to go to a new level,” Paul Veers, chief engineer at the National Wind Technology Center and a senior research fellow at the National Renewable Energy Laboratory, told the Verge. “It’s a stepping stone into the next generation of wind plants.”

While less sexy manufacturing methods are usually still most economically practical, sometimes 3D printing can save time, money—and in this case, maybe the planet.

Australia needs to be creative in the arts