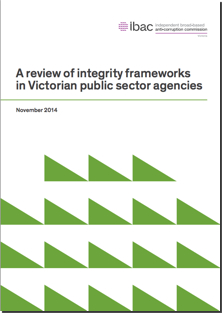 While high-profile corruption proceedings continue in New South Wales, public servants in Victoria risk overlooking corrupt behaviour because it’s not on their radar, according to research released by the Independent Broad-based Anti-corruption Commission.

Agencies were found to generally have sufficient awareness and processes relating to fraud and misconduct, but corruption “was not a specific focus”.

The most commonly reported risks were in the areas of procurement, breach of IT or information security, financial misconduct by employees, misconduct relating to recruitment or human resources and theft or misuse of resources by employees.

The report — A review of integrity frameworks in Victorian public sector agencies — argues that while not all agencies operate in ways that involve a significant risk of corruption:

“… it will always be important for all public bodies to establish and maintain robust risk assessment processes and to have at least the basic elements of compliance management systems directed to detecting and preventing corruption.”

“Very few agencies had specific processes or strategies in place to prevent corruption, and instead concentrated on financial, audit and fraud risks. This creates vulnerabilities for agencies which could expose them to corruption,” he said.

“Corruption can take many forms, such as abuse of power and misusing information for personal gain, and all ultimately cost the community.

“Detecting and preventing corruption means having in place strategies which look at these vulnerabilities across all aspects of operations from policy and planning through to service delivery. Without adequate controls in place, agencies can become vulnerable to corrupt individuals and practices.”

“Strong leadership and management is integral in helping to build a culture that ensures honest behaviour and fair decisions, and encourages staff to speak out if they’re concerned about corrupt activities,” said Kelly.

“If exploited, these weaknesses could result in a waste of taxpayer funds through corruption and a loss of public credibility for the agency and government.”

Previous research by IBAC found many senior Victorian public sector employees would have trouble identifying corruption risks, would not know where to report corruption and were not aware of the existence of an integrity framework within their agency.

Victorian bureaucrats: would you know corruptio...