Strong team. More jobs. Better economy. So say the National Party’s campaign hoardings. Only thing is, last Sunday’s Newshub-Reid Research poll – which had support for the Labour Party at 60.9% and for National at 25.1% – suggests the team is not looking that strong at all.

Nor will it be having much to say on jobs or the economy following the general election on September 19 if those numbers are close to the result.

As you might expect, National’s leadership dismissed the poll as rogue, saying the party’s internal polling (which hasn’t been publicly released) puts it in a much stronger position.

But this latest poll is consistent with three others released since May (June 1, June 25 and July 15). Averaged out, these polls put support for Labour and National at 55.5% and 29.1% respectively.

That is quite the gap. Assuming they are broadly accurate, what do they tell us about the state of politics in Aotearoa New Zealand? 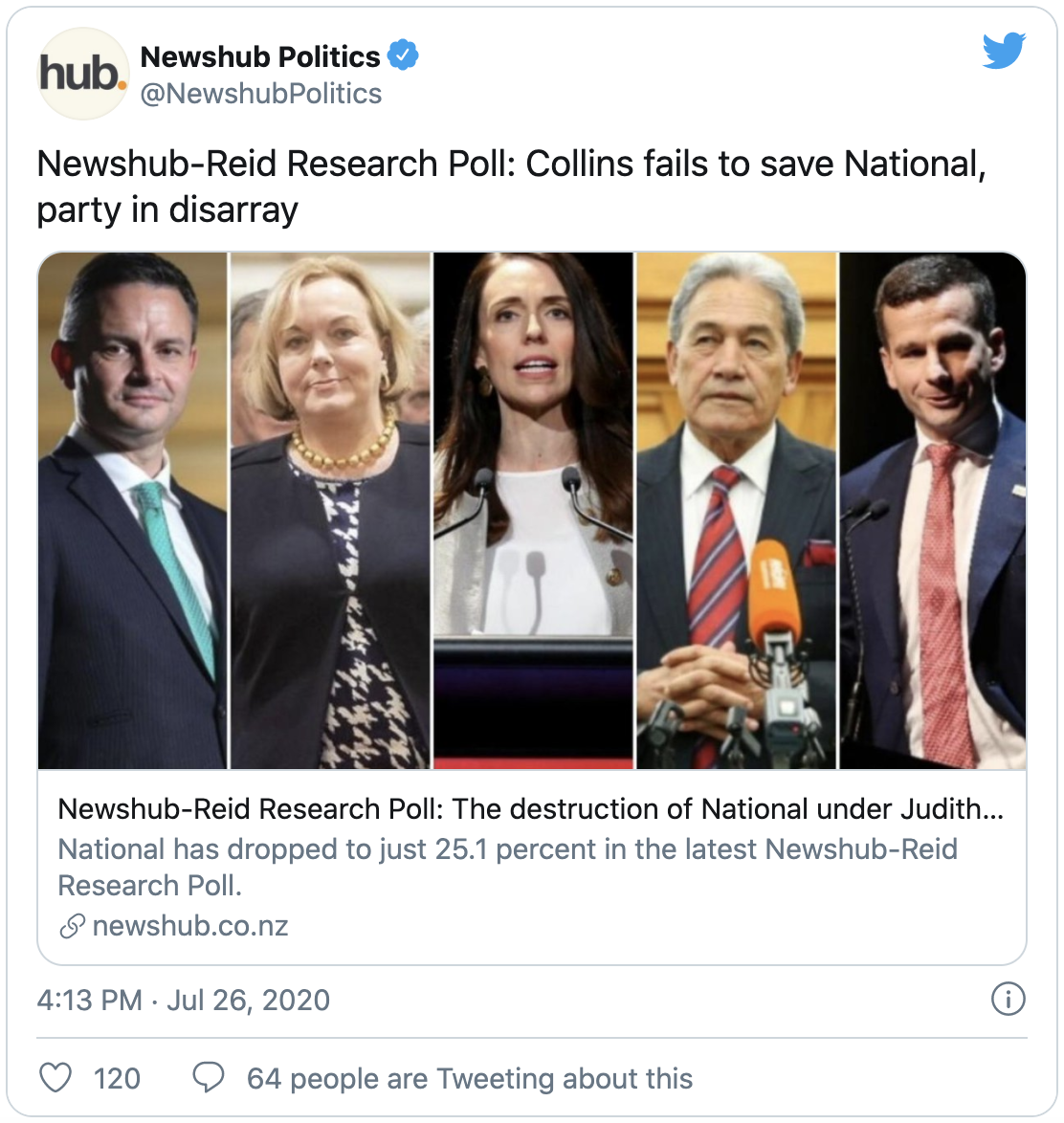 The centre is now centre-left

For a start, the political centre appears to be shifting to the left. Across the past four polls, support for Labour and the Greens sits around 62%. When nearly two out of three voters in a naturally conservative nation support the centre-left, something is going on.

Correspondingly, as the notional median voter shifts left, parties on the right are being left high and dry. The Reid Research poll put the combined support for National, ACT and New Zealand First at 30.4%, a touch under half the level of support for the centre-left.

In 2017 National secured nearly 45% of the party vote. Nearly half of that support has bled away – and most of it hasn’t gone to other conservative parties. New Zealand First is on life support; the right-wing ACT party is at 3%; and the other centre-right parties (including the New Conservatives, the Outdoors Party and the conspiratorially inclined Advance NZ/Public Party coalition) are well off the pace. 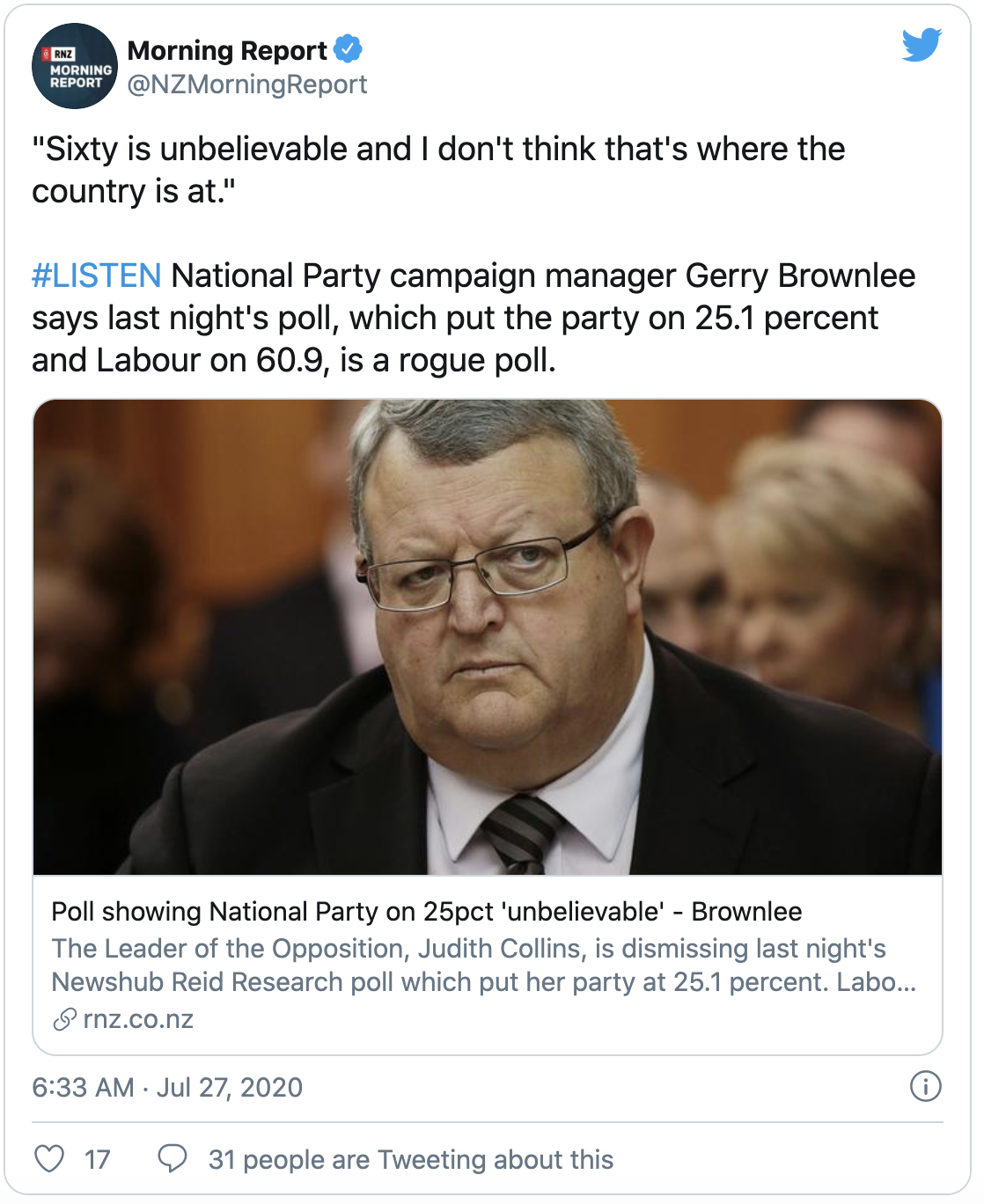 Then there is the question of leadership. Judith Collins was installed in an attempt to re-establish National’s bona fides as New Zealand’s natural party of government. But she has not had the impact Jacinda Ardern did when she took Labour’s reins several weeks out from the 2017 election.

In fact, while 25% of those polled by Reid Research support National, the party’s leader sits at only 14% in the preferred prime minister stakes: nearly half of those who would vote National do not rate Collins as the prime minister.

The polling suggests that Collins’s penchant for attack politics is not resonating with voters. She has not been helped by the recent antics of (now departed or demoted) caucus colleagues Hamish Walker, Michael Woodhouse and Andrew Falloon, but the buck stops with her.

National’s default claim of being the better economic manager also took a blow in the most recent poll. Asked who they trusted most with the post-COVID economy, 62.3% of respondents preferred a Labour-led government and only 26.5% a National-led one. 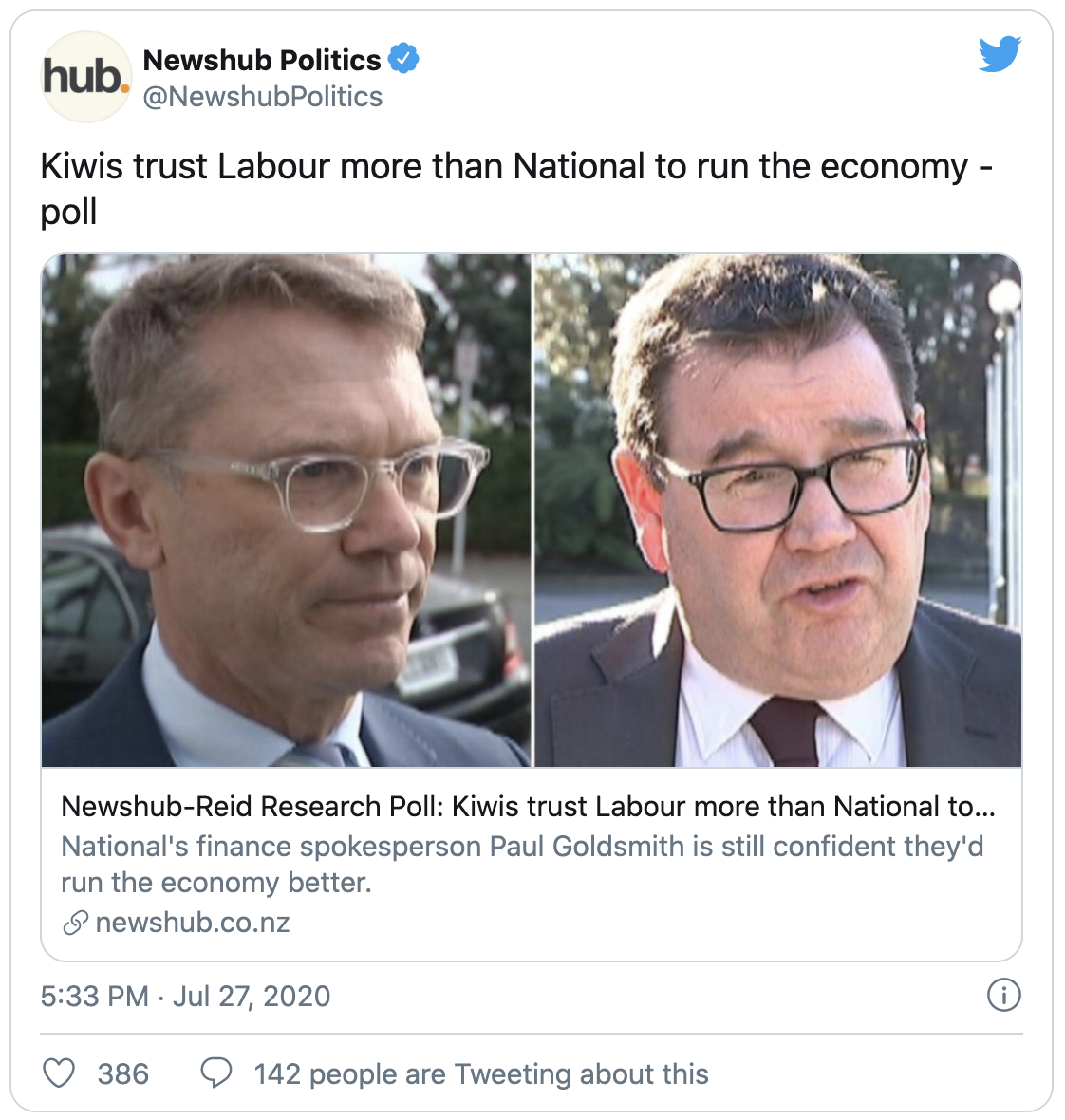 Could we see an outright majority?

Something may be about to happen to the shape of our governments. Under New Zealand’s previous first-past-the-post (FPP) electoral system we saw a string of manufactured governing majorities.

That may be about to change. Since the first mixed member proportional (MMP) election in 1996 we have not had a single-party majority government: multi-party (and often minority) governments have become the norm. That is because MMP does not permit manufactured majorities in the way FPP does. To win an outright majority you need to enjoy the support of a (near) majority of voters.

Labour may be on the verge of doing precisely that. If it does, it will be a very different kind of single-party majority government to those formed after FPP elections.

In 1993, for instance, the National Party formed a single-party majority government on the basis of just 35% of the vote. If Labour is in a position to govern alone (even if Ardern looks to some sort of arrangement with the Greens) it will be because a genuine majority of voters want it to.

Rogue poll or outlier on the same trend, Collins has had her honeymoon (if it can even be called that). In a way, though, neither Ardern nor Collins is the real story here. Much can and will happen between now and September 5 when advance voting begins. But something bigger and more fundamental may be going on.

If the pollsters are anywhere near right, New Zealanders will look back at the 2020 election as one of those epochal events when the electoral tectonic plates moved.