Another day, another woman being called a “whore” — and worse — on Twitter.

In the wake of her recent interview with Prime Minister Scott Morrison, ABC 730 host Leigh Sales posted some of the sexualised abuse she gets on Twitter just for doing her job.

This isn’t the first time Sales has faced an onslaught of misogynistic abuse. She says the “@ column” in her Twitter feed (where any Twitter account holders can send her messages) is “virtually unusable because of the constant stream of abuse”. 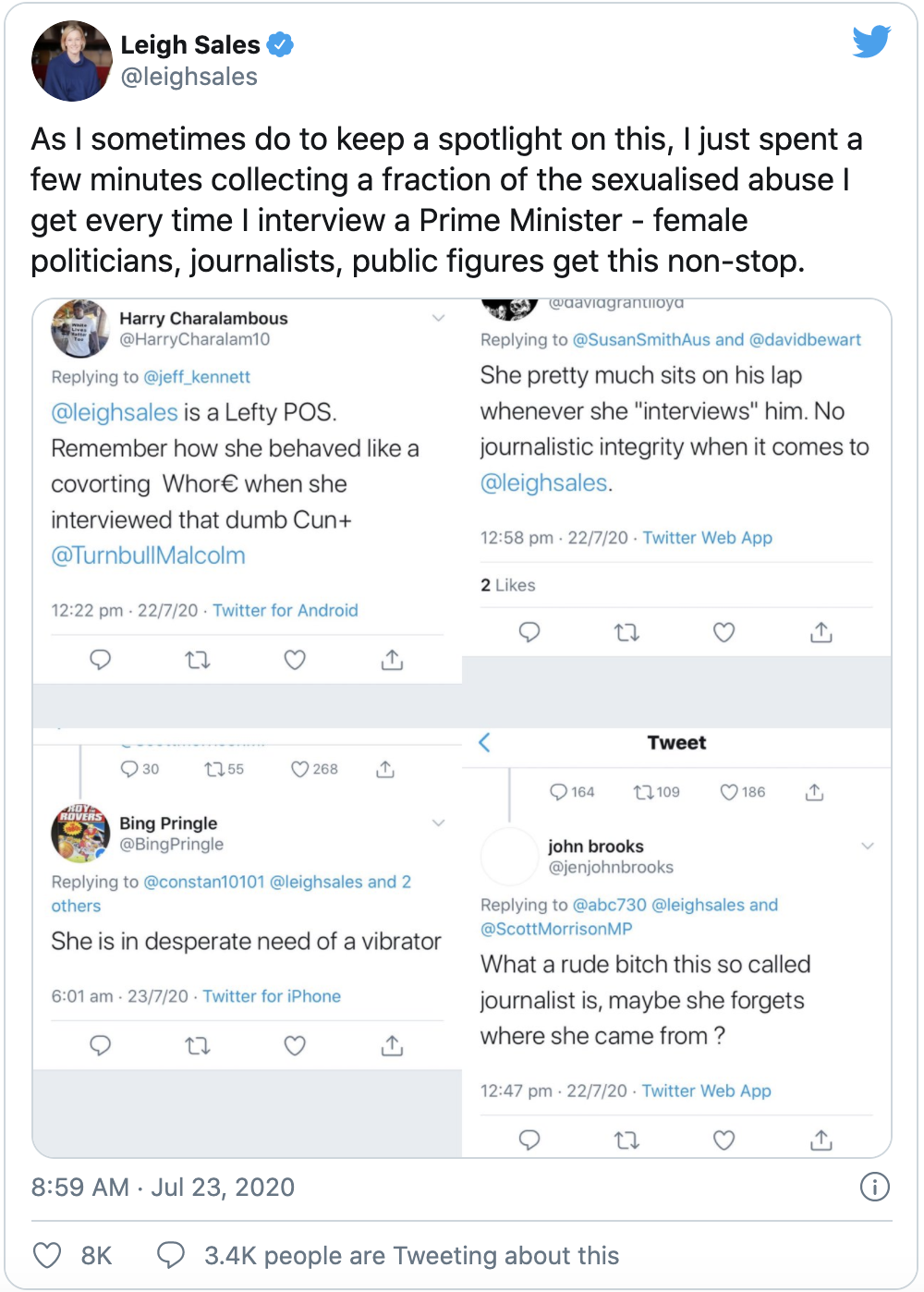 As a researcher of online gendered hate speech, I know all too well that Sales is not the only woman — high-profile or otherwise — experiencing abuse online.

A 2017 study found almost one in five Australian women have experienced offensive and degrading messages online, targeting their gender.

Online misogyny is hurled at acquaintances on Facebook and proliferates in news comments sections. It’s sent to women’s direct messages and their email inboxes.

It’s all over Instagram, where accounts have been created to send misogynistic messages. It also happens in private men’s only groups (and, yes, it still harms women even if they aren’t around to see it).

There’s nothing novel about the content, either. It’s so predictable that University of New South Wales feminist scholar Emma Jane built a digital “rapeglish” generator to prove it.

Existing prevention measures are not working

This has got to stop. But the current systems we have for reporting and penalising online misogyny are woefully inadequate.

Legislators may be trying, but they are failing to keep pace with evolving forms of online abuse.

Existing laws used to penalise online misogyny — such as the prohibition on using a carriage service to menace, harass, or cause offence — imply the “wrong” in question is the means of abuse rather than the abuse itself.

White males perceive the risks of health and technology hazards as low compared to white females and people of colour … White males’ low risk perceptions are associated with individualist and hierarchist worldviews as opposed to an egalitarian worldview.

[They are] built to accommodate harassment in the way a young man is most likely to experience it: as a one-off episode of name-calling.

However, for women and other marginalised groups, abuse is often systemic, extensive, and patterned.

Ultimately, this burdens women with the laborious task of persistently reporting abuse and blocking users, hoping some moderator will agree the content violates the platform’s community standards.

Online abuse is not ‘harmless’

Women have been driven offline as a consequence of their abuse. For many others, misogyny creates a “chilling effect” — women stay quiet to keep the target off their own backs.

A 2017 Amnesty International poll of women in the United Kingdom, United States, Spain, Denmark, Italy, Sweden, Poland and New Zealand found 23% had experienced online abuse (in a finding similar to Australia’s figures). More than three quarters of this group then made changes to the way they used social media.

Some people may think this is relatively harmless. But online misogyny denies women equal access to public spaces and goods and inhibits their right to free speech.

Online misogyny creates a hostile environment for women. And it’s not like women can just quit the internet. As Australian researchers Anastasia Powell and Nicola Henry point out,

in this digital age, our social interactions are not just mediated by technology but are increasingly dependent on it.

Everyone should be able to enter online spaces with the assurance that they will not become the targets of digital violence simply because of their gender.

Cyberspace, just like physical spaces, are supposed to be enjoyed by men and women equally. The creation of a hostile environment is just another form of sex discrimination. The fact that this discrimination is achieved through words and images makes no difference in terms of the harms it enacts.

Online abuse is not ‘normal’

As a culture, we cannot come to accept this abuse as normal, inevitable, or the price women must pay to enjoy what digital technologies have to offer. We have to address this problem.

The question is, how?

It’s all well and good to implore your mates to call out online misogyny when they see it. It’s all well and good for platforms to provide a system for flagging individual instances of harmful content. But piecemeal approaches will not see the fundamental cultural and behavioural shifts we desperately need.

As a start, we need more diversity in the tech industry and in government so policies and legislation do not fall afoul of the White Male Effect.

We also need better gender education, which means educating young people about the harms of misogyny. Social media platforms of course also need to do more when it comes to dealing with online misogyny (and other forms of hate).

But most importantly, we need to challenge our cultural tolerance for the sexist degradation of women.

Ultimately, the solution to the problem of online misogyny starts in the material world. The hate speech women cop online is no different to what they cop offline.

There’s nothing you can say to us in digital spaces that we haven’t already encountered — either directly or indirectly — in physical spaces.

To address the problem of online misogyny, we should not start by asking, “how can women experience cyberspace safely?”

Instead, we need to start by interrogating why men keep creating hostile environments for women, whether digital or physical.