A “state of disaster” has been declared for the whole of Victoria from 6pm, Sunday August 2, for a month. How is this different from the existing “state of emergency” and what powers does it give the Andrews government?

What is the difference between a state of emergency and a state of disaster?

Victoria has been in a state of emergency since March 16 2020. This is a declaration that is made under the Public Health and Wellbeing Act 2008, where there is a serious risk to public health.

The Act confers wide-ranging powers on the Chief Health Officer. These include the power to quarantine people, prohibit mass gatherings and impose other restrictions on the movement of people. The Act also confers a broad power to give any other direction that is reasonably necessary to protect public health.

A state of disaster addresses matters beyond public health issues. It is intended to deal with emergencies such as natural disasters, explosions, terrorism or sieges, but it can also be used to deal with “a plague or an epidemic”. It was used in Victoria in January 2020 during the bushfires, but the declaration was limited to specific areas that were in danger from the spread of bushfires. It was initially for a period of 7 days, which was later extended for a short period. 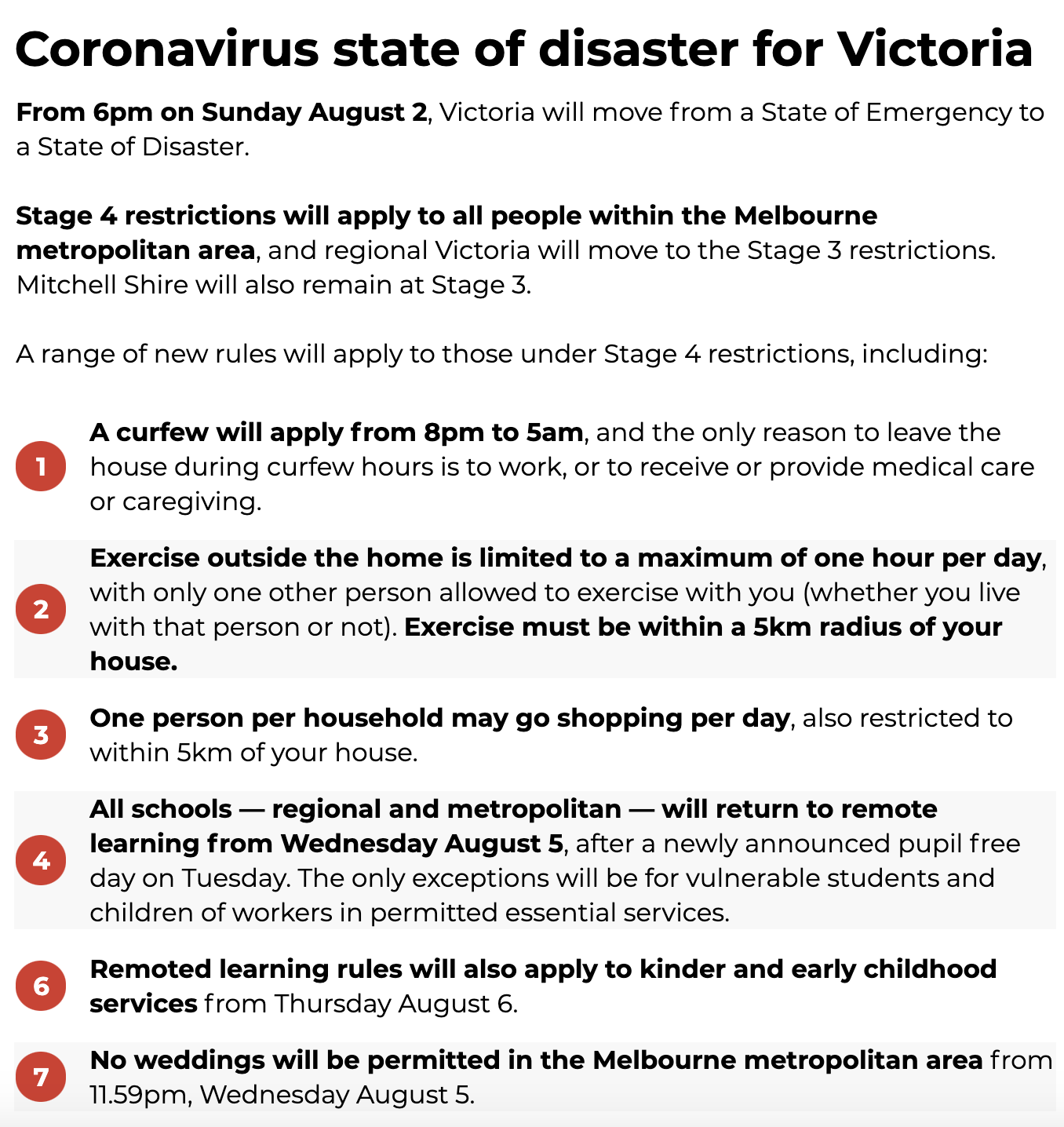 These restrictions will apply until Sunday 13 September.

The Emergency Management Act 1986 allows the premier of Victoria to make such a declaration after considering the advice of the minister for police and emergency services and the emergency management commissioner.

The premier has to be satisfied there is an emergency that “constitutes a significant and widespread danger to life or property in Victoria”.

What powers does a state of disaster confer?

The declaration of a state of disaster gives the police minister responsibility for directing and co-ordinating the activities of all government agencies. The minister may also allocate government resources as necessary to respond to the disaster.

The minister can direct government agencies to act or refrain from acting in particular ways to deal with the disaster. Such a direction prevails over anything to the contrary in any state law.

One of the most extreme powers the minister has is to override legislation. For centuries, it has been accepted in Australia and the United Kingdom that governments do not have executive powers to suspend or dispense with the application of the law set out in statutes.

In this case, however, it is a statute that is giving the minister, during a state of disaster, the power to declare that the operation of the whole or any part of an Act or legislative instrument is suspended.

Reassuringly, there are strict limits placed on this power. The minister can only exercise it if they believe compliance by a government agency with the provisions of an Act or instrument that prescribes the agency’s duties or responsibilities, would inhibit its response to the disaster.

Other relevant powers conferred on the minister include the power to control movement within, and entry into or departure from, the disaster area (which is the whole of the state) or any part of it.

What other effect does declaring a state of disaster have?

The royal commission into the deadly 2009 Victorian bushfires was critical of the failure to declare a state of disaster. It noted that beyond the coercive powers granted by such a declaration, it “would provide symbolic recognition of the gravity of a situation”, which might have sharpened the focus of emergency services. It would also have put political leaders firmly in charge of the emergency, reassuring the public and ensuring high-level government attention.

In Victoria at present, there is no doubt the emergency services are focused and there is high-level government attention.

But the declaration of a state of disaster may be effective in reinforcing to the public the absolute necessity of complying with government instructions in the midst of this pandemic. The symbolism of the action may therefore be as important as the powers conferred.

Section 198 of the Public Health and Wellbeing Act provides that a declaration of a state of emergency does not derogate from or limit any provisions in relation to the declaration of an emergency under any other Act.

It appears there is an intention that the powers conferred on people in relation to both a state of emergency and state of disaster should be exercised in a co-operative and co-ordinated manner to ensure a whole of government response to the emergency.

It is about marshalling all the government’s firepower to defeat the pandemic.