If you’re Black or Latino in the US, you’re almost twice as likely to die from COVID-19.

That’s according to The New York Times’ analysis of data from America’s Centers for Disease Control and Prevention (CDC). The numbers also reveal that Native Americans are more likely to be hospitalised with the condition than other ethnic groups.

In the UK, it’s a similar story. Official figures show that Black people are 1.9 times more likely to die from COVID-19 than white people. In France, infection rate data is not collected by ethnicity but the trends are believed by some medical experts to be similar.

These patterns are drawing attention to long-standing health inequalities faced by ethnic minority groups. From HIV/AIDS and cancer to prenatal care, and even amputations, research shows Black, indigenous and people of colour (BIPOC) in America and elsewhere are more likely to be affected, and less likely to receive the right treatment.

Implicit bias – when people are unconsciously influenced by prejudices or stereotypes – can play a part in these inequalities. In the US, for example, only 4% of doctors are Black, compared to 13% of the population. Several studies show that doctors can hold negative stereotypes of BIPOC patients without realising, which can make interactions unpleasant and affect the treatment given.

And in some cases, these inequalities stem from structural or overt racism that goes back decades, or centuries. Here’s how it’s developed.

Throughout history, medical racism has often been based on the myth that Black people have different – and inferior – bodies.

Tales of experiments that were done to show it make for grim reading.

Phrenology was one example of this – the belief popular in 19th-century Europe and America that character traits could be read through differently shaped skulls. The idea that Black people were naturally submissive was used by some slave owners to justify their trade.

The spirometer, a common medical device in use around the world today, also tells a story of racial difference. It measures lung capacity, and was used during the American Civil War to study the bodies of Union soldiers. Doctors incorrectly concluded Black soldiers had inferior bodies because white soldiers had a higher lung capacity.

Even today, spirometers are usually “race corrected”. Researchers say that history shows this practice could represent an implicit bias, discrimination, and racism, and masks economic and environmental factors. 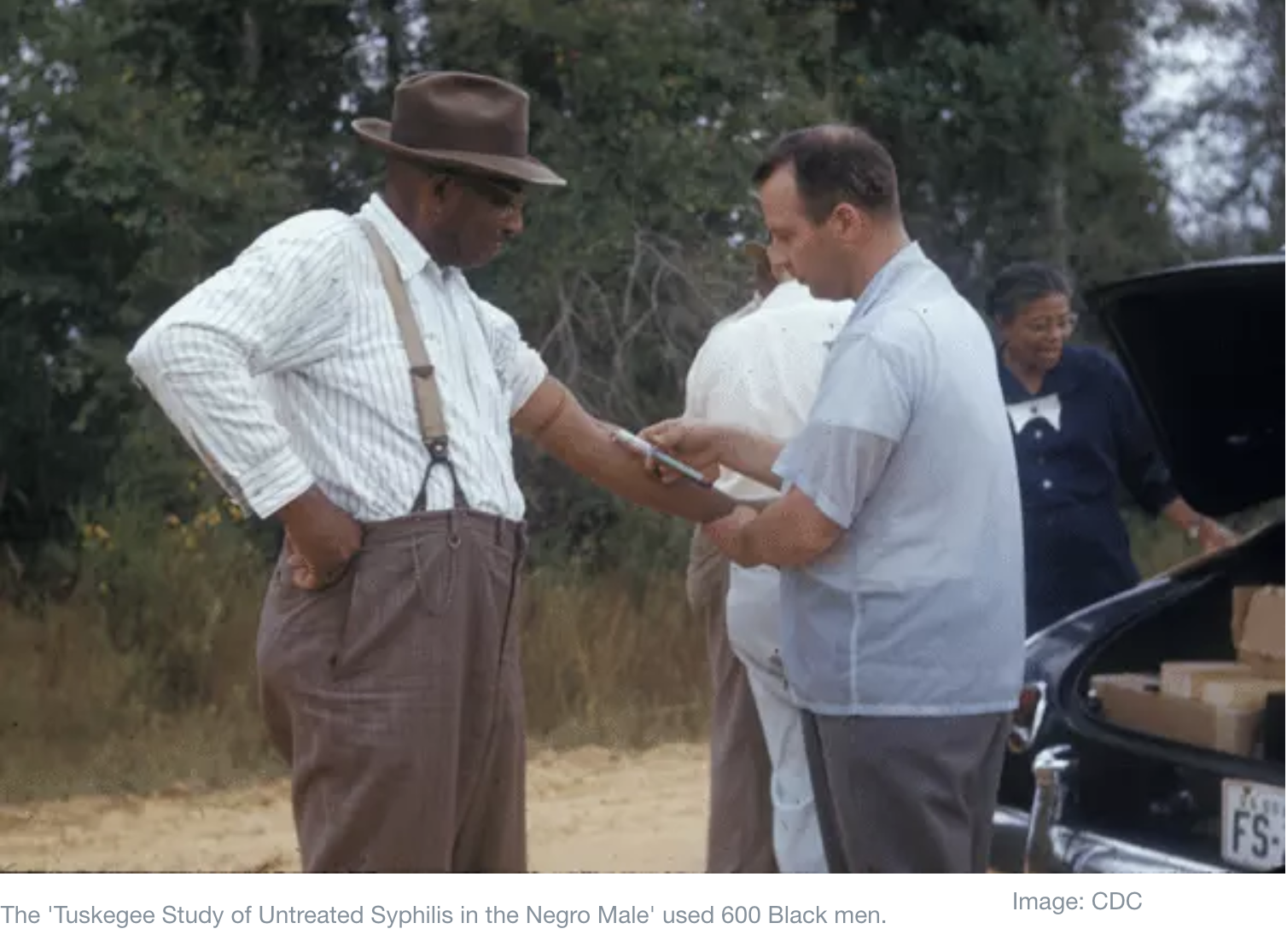 Black people were used unwittingly in early 20th-century medical experiments. One of the worst examples is the Tuskegee study.

In 1932, US government researchers recruited 600 poor Black men in Alabama for a syphilis study. “Free Blood Test; Free Treatment” said the advert. Except the 399 in the group who had syphilis were never treated – they were just observed until they died. But neither they, nor their families, were ever told about this.

The injustice had a long history: it wasn’t until 1972, when the study was exposed, that it was finally shut down.

American history provides another famous example of experimentation without consent.

In 1951, Henrietta Lacks, a 30-year-old African American woman, was diagnosed in hospital with an aggressive form of cervical cancer. She was killed by the disease, but the cancer cells lived on.

They were cultured on a mass scale, becoming known as the “HeLa” cell line. These “immortal” cells were critical to medical breakthroughs, including the polio vaccine, cancer treatments and IVF. They have even been into space – and you can still buy them today.

But they were taken without her, or her family’s, knowledge or consent. So was this medical racism?

On one hand, the 1950s was a time when it was common not to ask family members for their consent, whatever their race. But that wasn’t the only occasion. “In the 1970s, when scientists went back to her children to do research on them – that’s the moment I think race played a significant role,” Lacks’ biographer, Rebecca Skloot, tells National Geographic.

In 20th-century history, one of the big trends in medicine globally has been the use of computers to manage healthcare. But medical software can be racist.

In 2019, an algorithm that helps manage healthcare for 200 million people in the US was found to systematically discriminate against Black people. According to research published in the journal Science, people who self-identified as Black were given lower risk scores by the computer than white counterparts, leading to fewer referrals for medical care.

The computer appeared to give fewer referrals to Black people because their care costs – on average – were less over a year than for white patients (despite the Black patients being sicker). 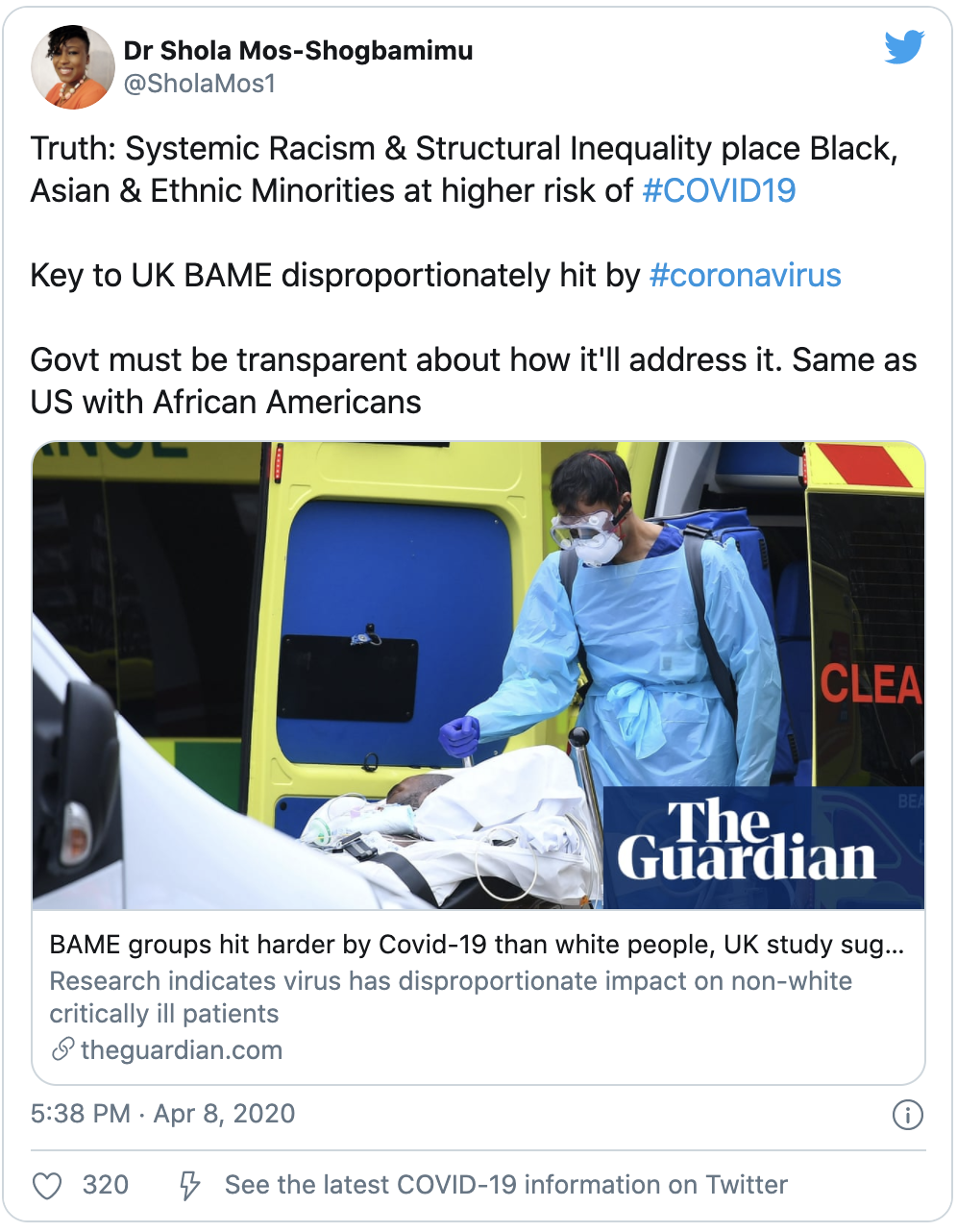 That might be because Black people have lower levels of trust in health-care systems, an example of “systemic racism” – where whole systems are loaded against particular groups, unknowingly or not. The researchers also suggested that direct racial discrimination by healthcare providers could play a part.

In recent years, systematic discrimination has become better understood as a powerful force around the world that traps people on lower incomes in unhealthier places –- for example, in more polluted neighbourhoods, breathing dirtier air.

Yet clearly, as COVID-19 shows, systemic racism – and other forms of discrimination – continue to be powerful, and deadly.

Harry Kretchmer is a senior writer for Formative Content