The balance of the global order has changed – no more so than in Australia’s own geographic region in Asia. Yet Australia has been slower, and probably less percipient, than the rest of East Asia to grasp the significance of the change. It is a truism that “the future is Asian” – a future being led by China.

There is no getting away from the fact that China is the principal engine of the global economy. It is responsible for approximately one-third of global growth; its trade with the ASEAN nations now exceeds its trade with any other bloc, including the EU and the US; and intra-Asian trade is greater than Asian trade with the rest of the world. One of the defining truths of our times is that the Western share of the global economy is shrinking and will continue to do so.

In this ‘plague’ year, while the rest of the world reels from an unwanted pandemic, China’s exceeded figures from June 2019 – seven months before the pandemic. The International Monetary Fund expects that the economies of almost every country in the world, except China, will experience a contraction in 2020. Its prediction for the US is minus 8%.

The longer-term disparity is more stark. In 2019, the IMF projected that, by 2024, China’s contribution to global growth would exceed 28%, while that of the US would fall from 13.8% to 9.2%. The COVID-19-induced global recession is unlikely to change the trajectory.

The growing economic dominance of China is partly a consequence of the weight of numbers and markets. China’s population is four times that of the US and almost double that of the West – being the UK, western Europe, North America, Australia and New Zealand. Yet China represents only one-third of Asia’s population and its gross domestic product is only about half the GDP of the region.

China’s strength is not merely economic. The PLA navy now has the world’s largest naval force in vessel numbers. And China’s ballistic missile force – including lethal anti-ship missiles – “presents such a challenge to US airbases and aircraft carriers in the Pacific that Washington can no longer claim supremacy in the region,” according to historian Odd Arne Westad. The problem will only get worse as China’s naval capabilities expand further over the next few years.

In addition, China’s satellite, missile and space technology has created a defensive bubble difficult to penetrate. This may explain why, according to Bonnie Glaser, director of the China Power project at the Centre for Strategic and International Studies in Washington, the Pentagon’s simulated war games with China “have all ended up with the defeat of the US”.

Meanwhile, the ascendant American view is binary – dividing the world between good and evil and advocating that the US and its allies engage in a great Manichean struggle with China that will define the next century. US Secretary of State Mike Pompeo described the conflict as one “between tyranny and freedom,” even proposing regime change in Beijing.

In a radio interview last month, former prime minister Kevin Rudd observed that Australian foreign and defence ministers “probably got the fright of their lives” when they were “fully and comprehensively confronted with” Pompeo’s thinking.

There are no takers for this approach among the countries of East Asia. They have their disputes and differences with China, not the least being those that relate to the South China Sea and the Senkaku Islands (Diaoyu Islands to the Chinese). But every one of them wants an accommodation with China that will permit them to coexist in relative peace, despite those differences. None desires military confrontation with China.

The Asian approach is more pragmatic, subtle and multipolar. Philippine President Rodrigo Duterte, for example, “like all other Asian leaders – prefers multidirectional alignment to reliance on the United States alone,” as Parag Khanna puts it in his book, The Future is Asian. Vietnam, despite its pugnacity and historical enmity with China, is no different. Singapore is quintessentially balanced.

Asians regard China with a mixture of anxiety and respect. They are also optimistic about the benefits that may accrue. China is both benefactor and bully. Everywhere you go in Southeast Asia, the presence of China is evident – in Chinese-owned banks, technology companies and real estate firms; Chinese-funded bridges and highways; and increasing numbers of Chinese students and businesspeople.

In the tide of human history, the rise of China is an unstoppable force. Asians know this. They prefer to engage with China rather than rally against it – especially under an American flag.

And in Washington recently, Australian Foreign Minister Marise Payne reiterated that Australia would make its own decisions in its own interests.

Chris Patten’s approach is preferable. After completing his post as the last governor of Hong Kong, he wrote in his autobiography: “China’s economic progress is good, not bad, for America, Europe and the rest of the world.”

He then added a note of pragmatism, adopting a Chinese aphorism: “What you cannot avoid, welcome.” We must all learn to coexist with China, whether we like it or not, Australia included.

Americans are about to vote, so what does this mean for the world? Join The Mandarin’s Managing Editor Chris Johnson and Play By The Rules author Michael Pembroke for a September 16, 1pm webinar in which they’ll discuss the state of US leadership, Covid-19 and the rise of China. Register here for this Mandarin Premium-only event. 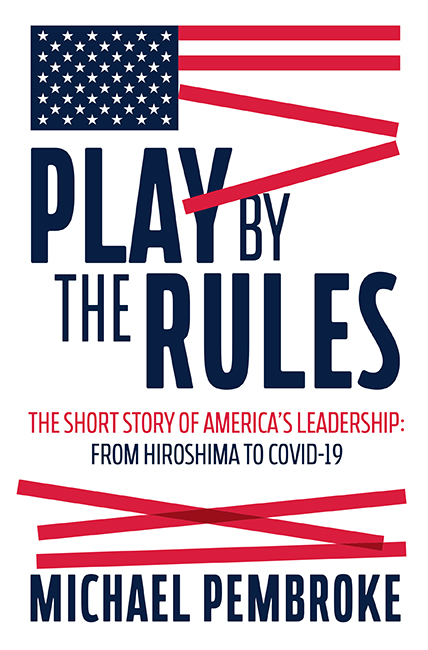 Michael Pembroke, a former New South Wales Supreme Court judge, is the author of 'Play By The Rules – The Short Story of America’s Leadership from Hiroshima to COVID-19'.