In the early pages of his new book, Michael Pembroke writes about sentiments in 1945 of: “An  American outlook on the world that shone briefly and brightly after the war: one that represented unquestioned moral leadership. The country was admired for its virtue and envied for its peace-and-plenty economy. At that time it did not claim any privilege, any special dispensation, absolving it from the rules and conventions of international law that applied to other nations.” Then, the author simply asks: “What happened?”

Play by the Rules – The Short Story of America’s Leadership: From Hiroshima to COVID-19 is a well-crafted and concise read about the moral decline of a once great nation. A decline that has led to diminished authority on the world stage and to the ushering in of today’s unfolding global power shift.

The author quotes academics, international surveys, and world leaders past and present who ask why America is seen more to “contravene the principles it enjoins others to follow” and why many regard it as “the greatest threat to world peace today”. 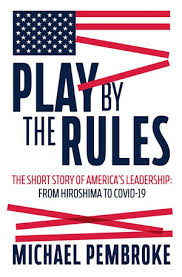 The blame is not laid squarely at the feet of the current US Administration filled with its chest-beating hawks; but instead at the decades of American leadership since the end of World War II.

Play by the Rules details the history of coups and interventions the US has orchestrated to topple governments around the world; of building up its own military might; and of shutting down any dissenting voices of reason from within.

All in the American interest and all about US-first. Today’s incoherent leadership is just a symptom of that philosophy.

It’s been a long time coming, the author argues, but nations in all continents are turning away from the US – increasingly leaving it to its own crumbling devices.

“Seventy-five years after the heady days of 1945, the United States has become what was once predicted: ‘a nation drifting dangerously amidst a global chaos it cannot control’. The deserved respect in which America was once held is rapidly evaporating, while the rest of the world has moved on.”

And: “Well-informed American aspirations of yesteryear seem like a faint and distant dream, remote from today’s reality. High-sounding principles that were once recognisable as a canon of American policy, now seem foreign and disconnected.”

The author quotes respected columnist Fintan O’Toole, who recently wrote in The Irish Times in relation to Washington’s handling of the COVID-19 pandemic that ‘The world has loved, hated and envied the US. Now, for the first time, we pity it’.

This all adds up to China’s rise being accelerated. The book argues that America has let the world down and it is now reasonable to embrace China – not least because it is inevitable.

“Although a populist American foreign policy based on opposing China may have domestic appeal, it is hardly a responsible and reasonable answer to the challenges that shape today’s world,” the author states.

Pembroke explains how Asia is filling a void created by the US, and he builds the case for its – particularly China’s – continued growth.

But while he outlines in some considered detail America’s track record of bloody coups and violations, Pembroke glosses over China’s awful history of human rights abuses. And he only gives passing acknowledgement of Beijing’s current and ongoing “heavy-handed” conduct towards the Uighurs. A weakness in this otherwise compelling, page-turning book. A fascinating read.

Author Michael Pembroke will join The Mandarin’s managing editor Chris Johnson in conversation for the first online Mandarin Talks at 1pm Wednesday 16 September. It’s not too late to register for this event. Secure your spot here.