With the 2020-21 federal budget ignoring campaigns for a social housing post-pandemic stimulus, and more than 160,000 in wait for public or Indigenous housing, Australia’s homelessness rate will surge when short-term income and housing protections wrap up, says the newest Australian Homelessness Monitor.

The second Australian Homelessness Monitor has found that, while homelessness has been temporarily suppressed by COVID-19 measures and even fell slightly in April-June, Australia’s homelessness rate is set to surge as short-term income and housing protections wrap up.

The 94-page report, commissioned by Launch Housing and produced by UNSW (City Futures Research Centre and the Centre for Social Impact) and the University of Queensland, tracks key homelessness indicators, analyses changes, and assesses government responses. It finds that pre-pandemic homelessness had climbed by 14% to around 290,000 Australians in the four years to 2018-19.

Unprecedented pandemic action by the states then saw at least 33,000 rough sleepers and other people experiencing homelessness who were booked into hotels and similar temporary accommodation. Additionally, emergency income supports, backed by eviction moratoria, saw homelessness and rental stress temporarily subside by mid-year.

“However, many of those hotel-housed have since returned to street homelessness, particularly in inner city Adelaide and Sydney, where rough sleeping has been once more on the rise,” lead researcher at UNSW Professor Hal Pawson says.

“It appears that only a minority of the hotel-housed will emerge from the crisis permanently housed, despite welcome action by the NSW and Victorian governments to temporarily expand capacity by leasing private rental properties.

“The extreme shortage of social and affordable housing presents a huge challenge here. Decades of belt-tightening has seen Australia’s social housing supply effectively halved since the 1990s. This reflects a long-term policy failure by both levels of government and calls for a revived national social housing program as part of a wider Commonwealth-led reform package.”

As The Mandarin covered in July, state governments have created a number of programs to transition people to permanent accommodation — e.g., NSW’s $36 million ‘Together Home’ project, which works to purchase homes from the private market and fund wraparound support services — while the new report finds that just a couple of months after most state’s outbreaks peaked, only a small proportion of people have been rehoused through this process.

In NSW, for example, 1,392 of the 1,918 rough sleepers given temporary accommodation have departed hotels in other circumstances, which may range from relocating to designated homeless accommodation to staying with friends to self-acquired private tenancies to resuming street homelessness. 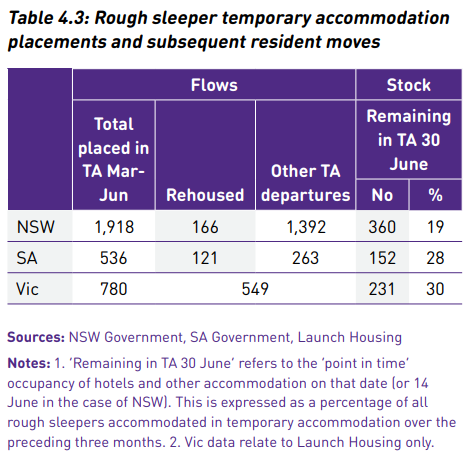 Now, Launch Housing chief executive Bevan Warner warns that the withdrawal of income protections and the end of eviction moratoria would push thousands to the brink.

Warner notes that before the health crisis, national expenditure on homelessness “emergency services” rose by 27% in the four years to 2018-19, and was on track to reach $1 billion in 2020. In contrast, social housing spending increased by just 4% over the same period, a rate he says is “a real decline relative to population” and proof that Australia spends “close to seven times more in crisis solutions — often just band-aid action — than we have been to properly fix the problem.”

It is unlikely to be addressed at the federal level any time soon, with campaigns for social housing as a post-pandemic stimulus  ignored in the 2020-21 federal budget, and despite more than 160,000 Australians being in current wait for public or Indigenous housing (Everybody’s Home Campaign). The budget also offered no permanent extension to JobSeeker after the coronavirus supplement brought it briefly above the poverty line, which ANU researchers put at around $816 per fortnight.

On top of a chapter exploring the success, failures and lived-impacts of COVID-19 policies and homelessness, the Monitor explores: housing market trends; homelessness policy and practice developments 2017-2020; the changing scale, nature and distribution of homelessness; and some of the shortcomings of currently available homelessness data.

Other key findings include:

Through both data collection and interviews with government departments, NGOs and people experiencing homelessness, the Monitor analyses state emergency housing policies and explores how some rough sleepers experienced the pandemic.

The report finds that while homelessness responses were not uniform across all states — the ACT, Northern Territory and Tasmanian governments enacted little or no emergency rehousing, while Western Australia cut short its pilot hotel program and chose not to extend, due to Perth’s low COVID-19 caseload — Australia’s response to people experiencing homelessness during COVID-19 is largely positive:

“The speed with which governments and NGOs acted to respond to homelessness during COVID-19 inevitably resulted in examples of poor coordination and stress experienced by people who are homeless as they moved from one form of temporary accommodation to the other. This notwithstanding, governments responded to people who are homeless during COVID-19 by quickly and successfully working across government siloed departments and productively with the NGO sector. This successful coordination and collaboration provides an important lesson for moving forward post-pandemic.”

Although data was not available to confidently say exactly how many people experiencing homelessness were accommodated during the first six months of COVID-19 (only two of the five governments approached — NSW and South Australia — were willing to provide Quarter 4 2019–20 temporary rehousing statistics ) the “unprecedented government funding certainly enabled many thousands of people access to decent accommodation that they would not have accessed in the absence of COVID-19.”

Initial statistics were sourced from both governments, media reports, and the Australian Alliance to End Homelessness, and suggested the number of rough sleepers provided with emergency rehousing in March-June 2020 was in the range of 2,621 and 3,879, while the total number of rough sleepers and other homeless people — i.e., people living in shelters or couch surfing — was in the range of 8,975 to 19,163. However, taking account of new figures published by Victoria’s Department of Health and Human Services as the report went to press, it is likely that between March and September 2020 more than 33,000 formerly homeless people were provided with temporary housing across Australia. 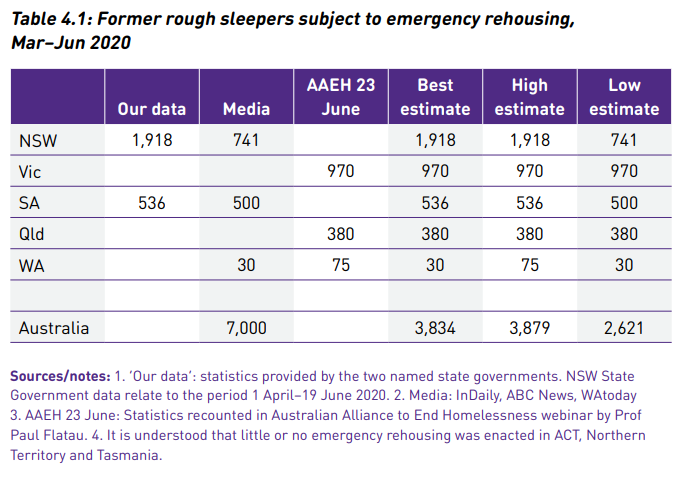 Government representatives noted the crisis saw people across both the public sector and NGOs overcoming “their own systems and boundaries and really rising to the occasion to deal with the solutions”, and that people experiencing homelessness — who historically have low trust in government institutions and might be offered very short stays at temporary accommodation cites — were more willing to accept offers of emergency housing.

The report also found that state governments articulated intentions to provide support services while people were in hotels, although a stakeholder suggested that the rapid pace of providing temporary accommodation meant that it was likely that support was not always consistently provided alongside the temporary accommodation.

Speaking to The Mandarin, Research Fellow of Housing/Homelessness at the Centre for Social Impact Chris Hartley was positive about the speed of these initiatives, and was sympathetic to governments having to effectively create policy on the fly, but notes that, “in hindsight, best practice would be looking at almost doing an audit of the accommodation just to really look at things like safety [and] determining whether the people who are staffing the hotels actually had an awareness of how to actually work with people who are experiencing quite complex needs at times.”

Hartley worked to conduct interviews with homeless people who, throughout COVID-19 were offered temporary and permanent accommodation, as well as traditional homelessness refuges. These people helped identify a range of issues, including but not limited to: a lack of coordination between DCJ and a hotel provider, leading to a two-hour wait-time; incidents of violence, contrasting with newfound feelings of safety; and a lack of information provided over length of stay.

For example Kevin, who otherwise expressed gratitude for the safety of a hotel, said that a significant stress for him was needing to re-apply weekly and being moved from one location to another:

“That is a little bit stressful. It is. It’s a little bit up in the air and it’s not a given that I’m going to be allowed to stay there. But in saying that, they have been, I think, fair and quite understanding, I suppose.

“[I] was in one place for a night and then I went to another place for maybe a couple of nights. So it was a little bit erratic. I was just doing what I was told. I was told to move, so I moved. The place I’m in now is a more low-budget place. It’s certainly not as flash as the first couple.”

Hartley notes that the research group was likely the first to interview homeless people throughout the pandemic — which, per social distancing requirements, were conducted over the phone and internet — and were determined to emphasise lived experiences:

“Most of the experiences, the interview started off with an incredible sense of gratefulness that people had that they were being listened [to] and being heard, and that accommodation was available to them. And then gradually, as the interview kind of progressed, you asked them, ‘Well, how appropriate is the accommodation and how safe do you feel, and what’s going to happen for you long-term?’ And there was a gradual sense of people kind of going, ‘Look, yeah, actually, I’m not really happy about this, and I’m not really happy about that…”

Transitional housing and beyond COVID-19

More recent announcements by the NSW and Victorian state governments have pledged new funds to facilitate rehousing out of hotels. These have included resources for:

The schemes have been welcomed by Launch Housing but faced challenges in terms of timing — schemes, for example, may have simply been enacted after the point whereby some people resumed sleep homelessness.

Keeping in mind that Table 4.3 (above) suggests that, at this relatively early stage, these transitional schemes have only rehoused a small percentage of rough sleepers provided with temporary accommodation, figures provided by the NSW government demonstrate that nearly three-quarters (73%) of those originating from the City of Sydney who were given emergency hotel accommodation during the pandemic were subsequently granted public or community housing tenancies. The report finds that, “at least in this particular context, and during the specified time periods, only a relatively small proportion of those assisted into long-term housing were placed in private rental.”

Hartley notes that while a significant proportion of people in the state went on to receive permanent housing, “there’s a sense that you still have such a significant social housing waiting lists that without, kind of, significant infrastructure, you’re really just kind of shuffling the deck chairs.” 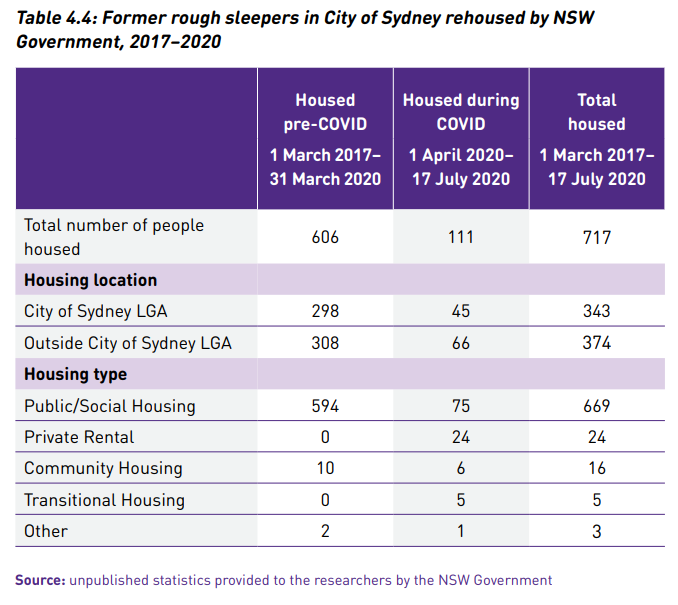 Lessons from the COVID-19 period

The report, which emphasises that governments treated homelessness as a public health issues throughout COVID-19 and calls for an injection of new social housing programs, includes four lessons based on the experiences of people who were homeless during COVID-19 as well as the joint government and sector responses: