Chinese foreign ministry spokesperson Hua Chunying last night knocked back calls for an apology over a graphic, Photoshopped image shared by spokesperson and deputy director general for the ministry’s information department Zhao Lijian, in response to the Brereton report.

While Scott Morrison called for an apology over the “repugnant”, falsified image of an Australian soldier slitting the throat of an Afghan child, the ABC reports that Hua instead called for Australia to apologise to the people of Afghanistan:

“The Australian government should do some soul searching and bring the culprits to justice, and offer an official apology to the Afghan people and make the solemn pledge that they will never repeat such crimes,” Hua said. “Earlier, they said the Chinese government should feel ashamed but it is Australian soldiers who committed such cruel crimes.

For context, on the report’s launch, ADF chief Angus Campbell issued an apology to the families of the dead, while Foreign Affairs Minister Marise Payne made a direct apology to Afghanistan’s President, Ashraf Ghani. Scott Morrison also called Ghani ahead of the report’s release to express “his deepest sorrow over the misconduct by some Australian troops”.

Zhao’s tweet comes after he last week claimed the Brereton report “points to the hypocrisy of some Western countries who like to consider themselves as ‘guardians of human rights and freedom’.” 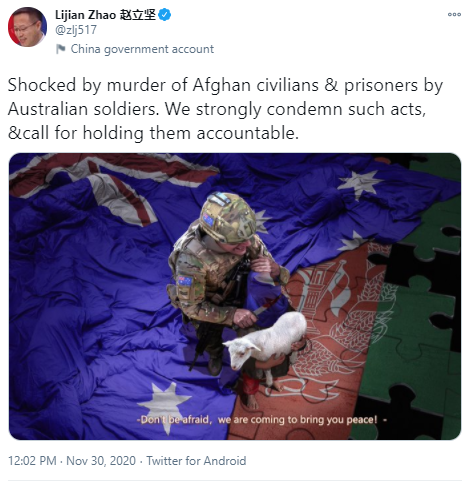 “It is utterly outrageous and cannot be justified on any basis whatsoever, the Chinese Government should be totally ashamed of this post,” Morrison said.

Payne also called the tweet the most “egregious” example of social media disinformation she had witnessed in her career, despite the fact, as we discuss below, the image appears to reference genuine, horrific allegations documented in the report.

“The Australian government has called in the Chinese ambassador and sought an apology from the ambassador in relation to this tweet,” Payne told Question Time. “We will [also] be conveying that message directly in Beijing through our ambassador.”

PM @ScottMorrisonMP says the Chinese Government should be utterly ashamed after a Gov official posted a fake "repugnant" image of an Australian soldier. pic.twitter.com/9fie02F6iJ

Morrison also acknowledged that there are “undoubtedly tensions” between the two countries, in a likely reference to China slapping Treasury Wine Estates with a 169% tariff; as Crikey explained, the measure follows similar, recent examples of Australia deploying anti-dumping laws against China — BlueScope’s benefiting from tariffs on steel imports in Australia and the US, for example.

“This is not the behaviour of a responsible, mature international power,” Wong said. “These tactics will be met with unified condemnation in the Australian community and they will be judged harshly by the international community.

“The allegations in the Brereton report have horrified Australia. What sets us apart is the dignified, transparent and accountable manner of our response.”

Finally, acting Immigration minister Alan Tudge put out another statement condemning the message, along with a claim that lines up as long as everyone forgets about the White Australia policy:

“Australia has welcomed migrants from China for more than two hundred years and Australians of Chinese background have added immensely to our nation.”

The image, which shows a grinning Australian soldier holding a bloody knife to the throat of a child holding a lamb, is an apparent reference to a story relayed in the report by military sociologist Dr Samantha Crompvoets, where:

…members from the ‘SASR’ were driving along a road and saw two 14-year-old boys whom they decided might be Taliban sympathisers. They stopped, searched the boys and slit their throats. The rest of the Troop then had to ‘clean up the mess’, which involved bagging the bodies and throwing them into a nearby river. Dr Crompvoets says she was told this was not an isolated incident. In this context, Dr Crompvoets says she was told that Special Forces soldiers were committing unsanctioned killing in order to ‘get a name for themselves’ and to join the ‘in’ group.

Zhao’s tweet, and the now-customary tit-for-tat over allegations of human rights abuses it inspired — i.e. AFR political editor Phillip Coorey responded by claiming,”Australia has investigated, owned up to and will prosecute its war criminals. China’s crimes against humanity (Uighurs etc) are state sanctioned, covered up, and more widespread. That’s the key difference.” — follows similar comments from the Russian Foreign Ministry, which, the ABC uncovered, has claimed Australian soldiers would not be “held accountable”.

Finally, it is important to note that Zhao Lijian, the diplomat at the centre of the storm, has a long, apparently successful history of publishing deliberately inflammatory tweets.

As Buzzfeed reported in a profile piece last year, the 48-year-old official has risen through the ranks of Chinese bureaucracy as “the combative, bombastic, frankly Trumpy voice of the People’s Republic of China on Twitter.”

Irrespective of what China says, Australia at least owes an apology to Afghanistan.