Since then, a lot has changed and not for the better. Two key themes within our overall analysis have emerged, both in response to the recession caused by COVID-19 and much of the inherent infrastructure portfolio risk.

Reliance on infrastructure capital as a source of stimulus

It has not been an enviable year for those working in the public sector, with challenging decisions and heart-wrenching trade-offs made daily. However, one positive step has been universally reinforced by the Federal and State governments: the construction of public infrastructure as a vital – perhaps the largest – source of economic stimulus to help us grow out of the recession.

While infrastructure spend is doubtless a powerful lever for Australia to draw upon for economic growth, this doubling-down approach brings many issues and risks:

The Grattan Institute recently updated its infrastructure spend analysis to note: “Taxpayers spent $34 billion more on transport infrastructure projects between 2001 and 2020 than they had been first told they would spend, and there has been a $24 billion cost overrun across just six current projects.” These figures exclude non-transport spend, such as the National Broadband Network.

We are now at the peak of infrastructure spend, and with increased supply constraints, the historic average of 21% overrun is set to exceed 30%. In other words, we can expect a 30% overrun on capital spend that is already priced 25+% above pre-bubble rates. 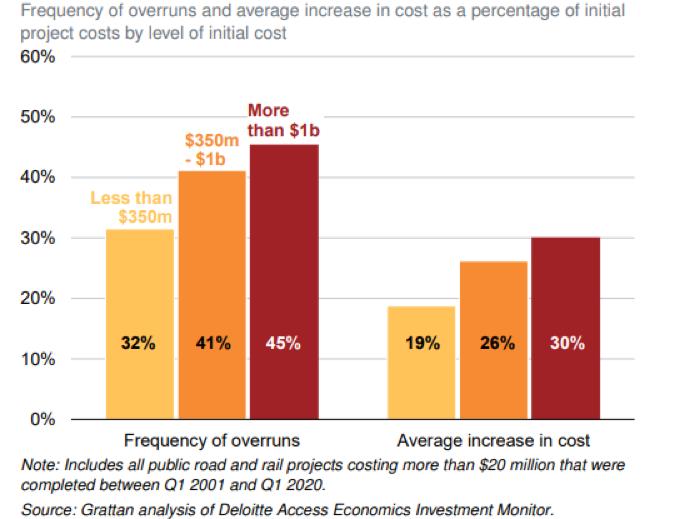 While borrowing costs for Governments are indeed very low, much of what we are borrowing goes towards inflated prices and overruns, which have a much lower (sometimes negligible) economic stimulus multiplier.

Thankfully, financial and execution risks can be successfully mitigated within weeks with effective portfolio prioritisation and re-sequencing and program intervention. The result would be a safer suite of projects that would likely save taxpayers billions of dollars.

Government entities should begin by clearly and concisely articulating the principles under which they prioritise capital spend, and then ensure consistent implementation across the country.

The portfolio should be prioritised against these principles, include overall employment in areas and demographics hit particularly hard by COVID-19 as well as a host of secondary benefits, among them local manufacturing, adjacent business activity and public utility created by the completed infrastructure, overall value for money, retention of profits within Australia and future proofing (digital and environmental factors). This would determine which projects should be accelerated, which should be delayed (given scarce resources) and which require re-scoping or more significant pivoting.

The potential to improve the value delivery of each major program should be rapidly assessed, such as the capacity to reduce the critical path, reduce cost (for instance reducing scope that adds little community value), reducing risk and increasing economic stimulus. Targeted interventions should then take place for these earmarked programs to ensure the potential performance uplift is sustainably executed.

There is a natural shortage of experience in the proactive management of shared risk / PPP / alliance models amongst government owners (who typically have backgrounds in lump sum program management). Governments can collect, share and deploy frameworks and battle-tested methodologies to improve management of infrastructure projects at all stages of their lifecycle from concept, construction, commissioning and ongoing operations, for those who need help. However, the program managers will likely need to be supported by ongoing capability uplift, coaching and targeted support from private sector experts (without outsourcing lengthy BAU roles to these experts).

The States should coordinate a central ‘clearing house’ for large groups of workers stood down from identified projects to rapidly re-deploy them (including pre-planning), similar to job-matching that has already taken place during COVID-19.

The Federal Government should provide central oversight on the scarcest resources (such as tunneling teams) to optimise for the community outcome, and coordinate critical skills training/development, noting these will require an unparalleled level of collaboration between the States (in the absence of select working visas for international infrastructure workers)

Finally, given the lack of transparency in the forward-looking reporting of risks in transport infrastructure projects, rapid mobilisation of digital solutions regarding progress, project buffers, resource shortages and so on will be vital to enable Governments to remove roadblocks and course-correct before risks manifest. Access to such data, coupled with predictive analytics, allows owners to predict project failures before they manifest.

Today’s once-in-a-generation wave of capital investment (particularly in infrastructure) may be the most powerful asset our nation has to recover from the current recession. However, it carries significant risks that have already manifested and it requires the understanding that COVID-19 may worsen.

Yet with the willingness to apply simple and agile portfolio optimisation techniques, these unprecedented risks can be mitigated simply and safely.