The Commonwealth’s new public service commissioner John Lloyd comes with a fierce reputation on industrial relations, but he is inheriting a body of work that digs deep into improving talent and performance management in the APS. It prioritises building employees up, rather than slash and burn under-performers.

Confident in the success of its talent management approach to the best-of-the-best at SES 1 rank, the Australian Public Service Commission’s plans in 2015 pursue a common approach to talent management strategy with the Secretaries Board, with implications for the entire SES. It has also prioritised work developing leadership of Executive Level 2 employees.

In his final address last week, outgoing commissioner Stephen Sedgwick talked up progress and adoption of that latest body of work — particularly the APSC talent development program for SES employees identified as having good potential to take on more senior roles.

Sedgwick stressed that building capability and a “performance culture” across an agency starts by building it at the top with talented leaders. The commissioner has taken aim at perceptions by some in the public service that performance management is a euphemism for removing under-performing employees. As much attention needs to be paid to those with greater potential. He told senior APS leaders last week:

“Performance discussions also afford managers the opportunity to identify and nurture their most talented employees. It’s very pleasing that increasing attention is being paid to talent management and succession planning in the major APS agencies.”

Already a third of agencies across the APS are using the commission’s criteria for talent management and nominating those with potential for its fast-track program. Although, Sedgwick feels it’s needed more widely than currently adopted.

The six-month talent development program differs from the SES induction and leadership programs run continuously by the APSC in that it is invite-only. Eager participants can’t just fork out the $13,000 from their own budget, but must be nominated by their secretary or agency head, who becomes involved in developing the tailored course content and assessment. Although, inclusion on the course carries no promise of promotion.

Nominations for next year’s SES band 1 course are due in March. In choosing candidates, the commission recommends asking if the employee has high cognitive and interpersonal aptitude as well as the affinity and desire to influence how the APS responds and adapts to new challenges:

“While performance is an integral part of identifying ‘high potential’, performance alone is an insufficient predictor of success in more senior, critical, or complex leadership roles, and levels of ability, aspiration and engagement should also be considered.”

For those who miss out — and the APSC asks agencies to note for unsuccessful nominees that “high potential” is a judgement at a particular point in time, not a permanent black mark — there is more work being done now to expand best practice in building up all leaders, using the so-called nine-box grid model created by General Electric.

A “common approach” to talent and succession planning is being developed collaboratively under the auspices of the Secretaries Board, Sedgwick said:

“The grid encourages a discussion with individuals with both highest and lowest levels of performance and aspiration. It also encourages the identification and recognition of both high flyers and those highly valued employees whose performance is superb but whose aspiration is rooted in their current level of responsibility and without whom our organisations simply cannot function.”

In contrast to the career crossroads model, the nine-box grid provides a simple at-a-glance view of leadership talent in an organisation, candidates for succession planning as well as those needing extra support, and creates opportunity for open dialogue about needs amongst the leadership team. It can be used inside a single agency, or across the entire SES. 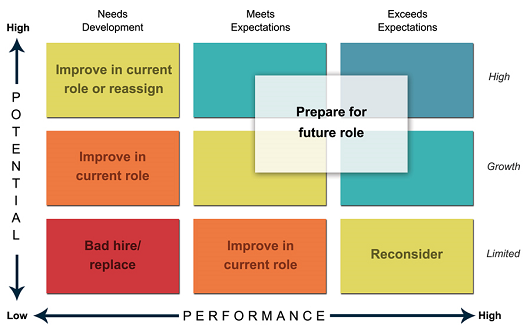 A spokesman for the commission told The Mandarin that this new assessment approach of the SES workforce will “inform workforce decision-making across the APS, including development, career and mobility options for SES”.

The latest State of the Service report revealed a gap in strategic talent management among smaller Commonwealth agencies. The report concludes:

“Talent management is an important method of building human capital in agencies and across the APS. At present, however, it can best be described as developing, and continued monitoring of this capability as it develops is warranted.”

The commission also indicated the leadership practice modules will be expanded to EL2 employees in 2015 as it pushes for the remainder of the ranks to take up the management and core skills courses on offer.

“The [APSC’s] Strategic Centre is in the early stages of implementing APS core and management skills offerings, with a number of APS-wide programmes available to agencies. As APS-wide products continue to be progressively designed, developed and released, it is expected that additional agencies will reduce or redirect their internal programme development efforts over time.”

Centralising these functions has been a significant push under Sedgwick, who leaves the role expressing pride in the impact it has had — performance-related sackings are at a 15-year low, the State of the Service report revealed. However, it’s not clear if the commission and the Secretaries Board will have the same approach under Lloyd.

The Strategic Centre for Leadership, Learning and Development has a questionnaire to help agencies identify their high potential leaders …

Aspiration — Does the employee:

Engagement — Does the employee:

Ability — Does the employee:

I was interested to read your article “Building talent on top: the APS priority for promotional taps”. We have worked very closely with the APSC in the establishment of their Strategic Centre, and their approach to talent – sharing the lessons we have learned in the five years since we were established by the Victorian Government Secretaries. We share all of our tools and approaches with our colleagues around Australian (and in New Zealand) – and they in turn share their resources. We simply ask that our work is acknowledged where it has been used by others. We were delighted to read that the APSC’s talent questionnaire had been adopted so widely across the APS as the source of the behaviours in the questionnaire is the VLDC. Please feel free to download a copy from our website http://vldc.vic.gov.au/images/Publications/VLDC_Leadership_Potential_Inventory.pdf