New analysis by the Australian Conservation Foundation (ACF) has found that environment minister Sussan Ley refused outright 39 freedom of information requests in the last financial year, while granting just one in full and three in part.

The audit Access denied: How Australia’s freedom of information regime is failing our environment examines government FOI data, as well as more than 100 FOI requests made by ACF, over the past five years.

It is one of the first major pieces of research to look at freedom of environmental information in Australia, and reveals an increase in refused FOI requests, more redactions, higher charges and longer delays for access to government documents. It found:

ACF’s democracy campaigner Jolene Elberth emphasises that access to public information is crucial to the group’s work of “protecting the natural world against harmful or corrupt decisions,” and slams what she calls “fundamental flaws in the regime that is supposed to facilitate open and transparent government in Australia.”

“This has serious ramifications for efforts to tackle the climate crisis and protect Australia’s unique wildlife and precious natural ecosystems,” Elberth says. “All parliamentarians and observers who care about the transparency of Australia’s democracy should be concerned by these figures.”

“It’s time for Australian governments to lift the veil of secrecy from information and decisions we all have a stake in.”

Ley’s office did not respond to questions before deadline, but a spokesperson has told The Sydney Morning Herald the minister had “complied with statutory time frames and guidelines for all FOI requests since taking office in 2019”. 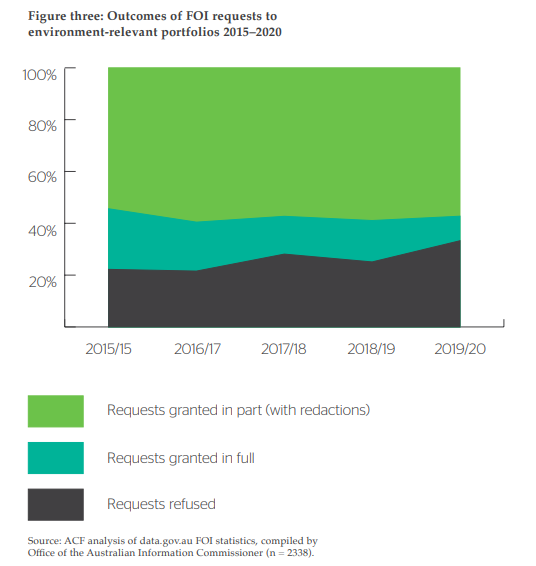 The report begins by citing the two major reviews into the federal transparency laws from the past decade — the 2013 Hawke inquiry into FOI laws, which found it was too early to assess 2010 reforms; and a 2017 Australian National Audit Office investigation into the Information Commissioner’s operations in respect to the departments of the Attorney General, Social Services and Veterans’ Affairs, which found an increase in exemptions over five years prior to the report and an increase in review applications (and increased substitution of decisions) — as well as failed amendments from Senator Rex Patrick in the Freedom of Information Legislation Amendment (Improving Access and Transparency) Bill 2018.

Broadly, the ACF points to two fundamental, high-level problems with Australia’s FOI system: one, resourcing at the Office of the Australian Information Commissioner, which faced defunding under the Abbott government in 2015 and, despite survival, has not seen funding fully restored; and two, cultural and political issues, with Elberth telling The Mandarin that “the absence of proper training, guidance and resourcing leave the FOI Act vulnerable to inconsistent interpretation [that] makes it possible for a culture to develop in which secrecy can grow and even become the default position”.

“On delays, we appreciate that government agencies have limited resources and often are dealing with multiple requests,” Elberth says, highlighting that while the environmental non-profit agrees to nearly every extension request they receive, delays in the report “have occurred outside the extension process and more often than not come with little explanation”.

“On costs, we usually do not receive explanations for charges, other than a subjective calculation of the time spent on various parts of the process. For example, the Department of Industry, Science, Energy and Resources once advised that it would take five hours ‘search and retrieval time’ to locate four emails.”

To identify long-term trends and failure points, the report examines data from the past five years provided by ministers and federal government agencies to the OAIC, i.e. an increase in exemptions relative to both requests determined and number of documents where no exemptions were claimed. 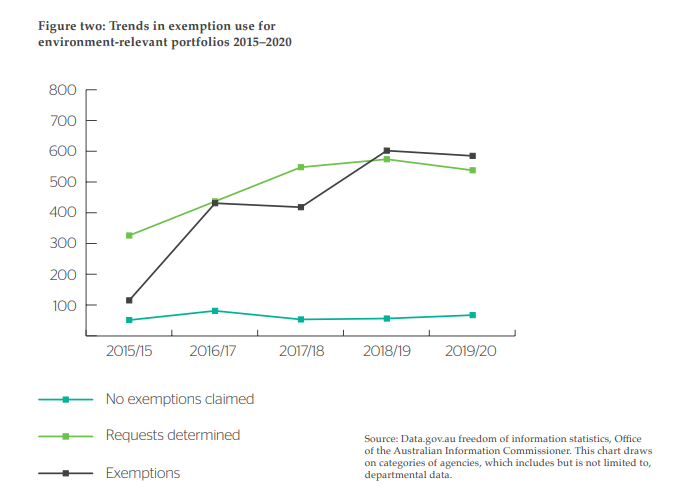 For greater depth the ACF also examines 109 FOI requests it made over the same time-frame, including requests to state and local governments as well as federal ministers and agencies. Other sources include FOI disclosure logs published by the Department for Agriculture, Water and the Environment; the Department of Industry, Science, Energy and Resources, and the Department of the Prime Minister and Cabinet, as well as Information Commissioner review decisions database and OAIC annual reports.

On top of the major findings highlighted above, the audit unpacks rejections and exemptions of ACF requests by agency, i.e. a massive discrepancy in exemptions as percentage of documents between the Clean Energy Regulator (159%) and the Department of Agriculture, Water and the Environment (49%).

Both bodies used discretionary “public interest conditional exemptions” at roughly the same rate (79% and 84% respectively), meaning CER more frequently decided that “conditionally exempt” information was not in the public interest, a distinction ACF suggests could be down to differences in guidelines or cultural understandings of “public interest”.

ACF does not dig into the 39 requests rebuffed by minister Ley across the 2019-20 financial year — that statistic is just drawn from government data — but notes the number of requests, 43, was significant in that the office typically receives less than 10 requests per year. 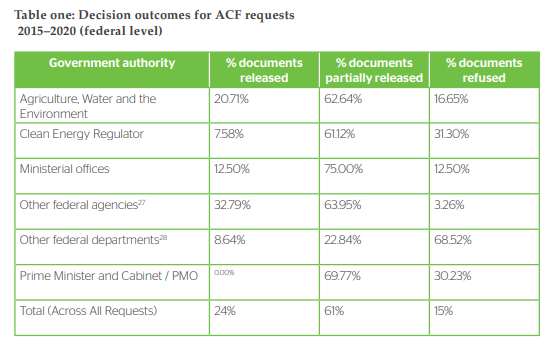 The report also provides five case studies from the ACF’s own experiences:

In another example ACF argues showed “a lack of good faith engagement with the FOI Act and its principles”, the organisation lodged a request in April 2019 for a list of meetings (plus the agenda, minutes and any additional documents produced) across five days between the prime minister/his advisors and any persons regarding the Adani-Carmichael mine.

Two months after deadline, the Prime Minister’s Office dubbed the project too onerous to proceed, before concluding after two refined requests — and 118 days after the statutory deadline — that the documents did not exist.

Reflecting on the report with The Mandarin, Elberth emphasises the group does not blame the public service and appreciates “the vast majority of public servants do their best to interpret and administer the Act fairly and consistently.”

“Public servants have had years of working with constrained resources, the nature of information changing rapidly and a series of governments that have made numerous controversial environmental decisions,” she says. “Our advice is to do the FOI training, be frank and fearless and foster a culture of transparency.”

“Proper training, guidance and resourcing would make it easier for public servants to animate the FOI Act and would lessen the potential for political interference.”

Finally, ACF has proposed ten recommendations, 1-7 of which it calls on to be enacted immediately while 8-10 are long-term:

Departments: Department of Agriculture Water and the Environment Office of the Australian Information Commissioner