The new trade minister, Dan Tehan, has been handed one of the Morrison government’s most demanding roles. Despite a lot of chest-thumping in government circles about the need to stand up to “Chinese bullying”, Tehan’s task will be to find a way to restore a constructive trading partnership with China in the national interest.

Beijing’s trade reprisals for perceived political slights should not be countenanced. However, there is no useful purpose in overreacting to China’s bad behaviour.

The business community, which has been alarmed by a deterioration in the China relationship, will watch Tehan carefully as he outlines his ideas for engagement.

He will need to navigate the treacherous terrain between trade and geopolitics, which will not be easy given the countervailing forces at work within the Morrison government. These are driving decisions to lower the curtain on significant Chinese investments in the Australian economy.

Tehan, who has a background in trade diplomacy as a former diplomat, will hold his first press conference as trade minister this week to address some of the challenges he will face in his new role.

He could do worse than to use the occasion to reinforce the point that Australia has no interest in confrontation with China on the trade and investment front. However, his task has been complicated by investment decisions taken recently by Treasurer Josh Frydenberg.

Last year, Frydenberg overrode advice from the Foreign Investment Review Board and Treasury when he blocked Hong Kong-listed Mengniu Dairy from taking over Lion Dairy and Drinks, then owned by Japan’s Kirin. Bega Cheese purchased the company in November.

Both decisions were taken on national security grounds. In the case of Probuild, Frydenberg had concerns about CSCE’s links with the Chinese defence industry. The treasurer has not advanced specific reasons for his decisions. 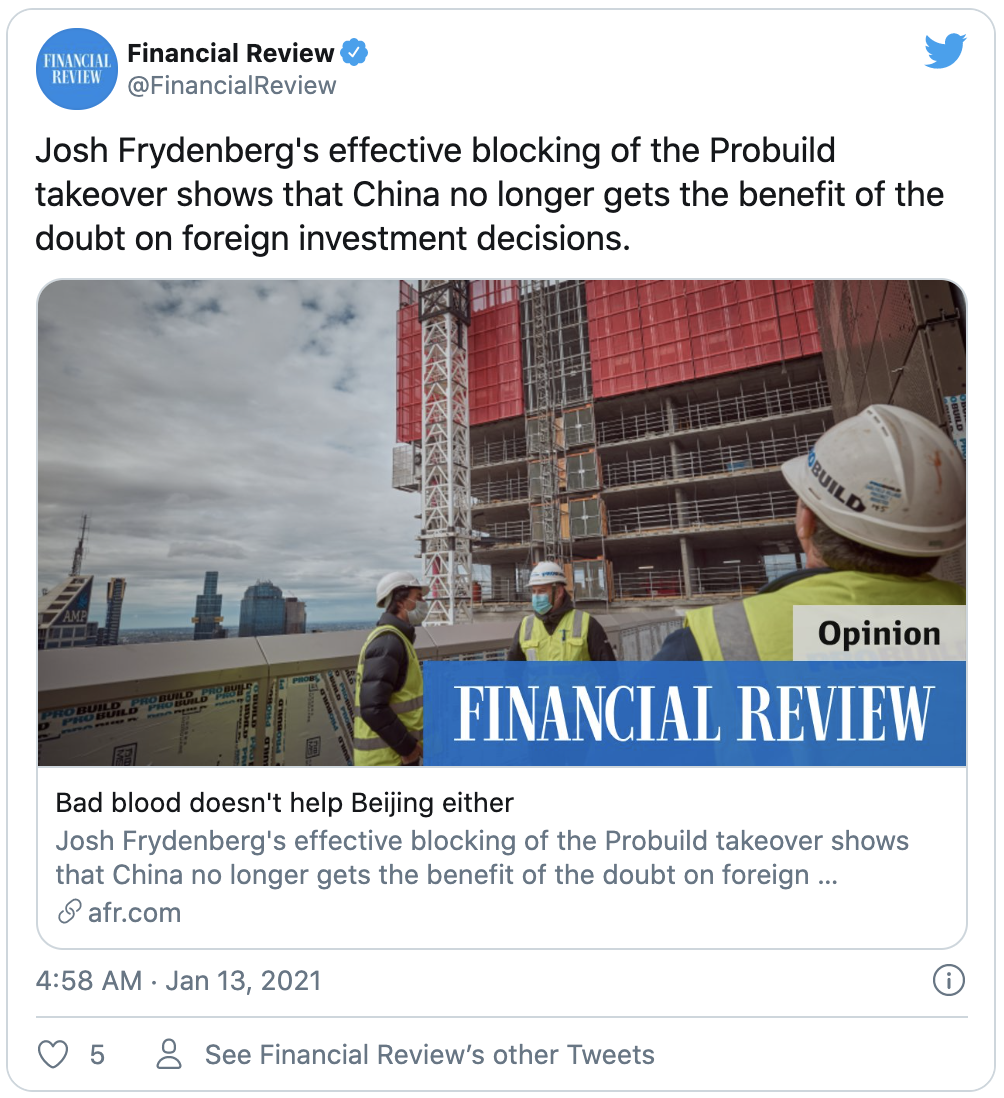 Unhelpfully for Tehan, who is intent on restoring a working relationship with his Chinese counterparts, the Mengniu and Probuild decisions have been represented in the Australian media as a blanket repudiation of Chinese investment.

Apart from the Mengniu and Probuild examples, the Hong Kong-based CK Group’s $13 billion bid for the pipeline operator APA Group was similarly rejected by Frydenberg in 2018 on security grounds.

In November, at The Australian newspaper’s annual Strategic Forum, Frydenberg said Australia wanted a “respectful and beneficial” dialogue with Beijing, but his banning of the Mengniu and Probuild deals have sent mixed messages to China.

China’s embassy in Canberra was quick to criticise the Probuild decision, saying in a statement,

Weaponising the concept of national security to block Chinese investment is detrimental to mutual trust, as well as bilateral economic and trade relations.

What Tehan needs most of all is a game plan for his dealings with China.

These upcoming events in the global trade calendar might provide an opportunity for a resumption of a dialogue with Chinese officials if the meetings aren’t cancelled or conducted virtually due to the pandemic.

In all of this, it should be noted, Australia and China have not severed formal trade ties. The two countries have a free trade agreement in place. This came into force in 2015 and was due for a five-year review last month, though this did not occur given the current tensions.

Canberra and Beijing are also signatories to what has been called the world’s largest free trade agreement. This is the Regional Comprehensive Economic Partnership (RCEP), which comprises 14 countries regionally and 30% of global GDP. The RCEP is set to come into force this year. 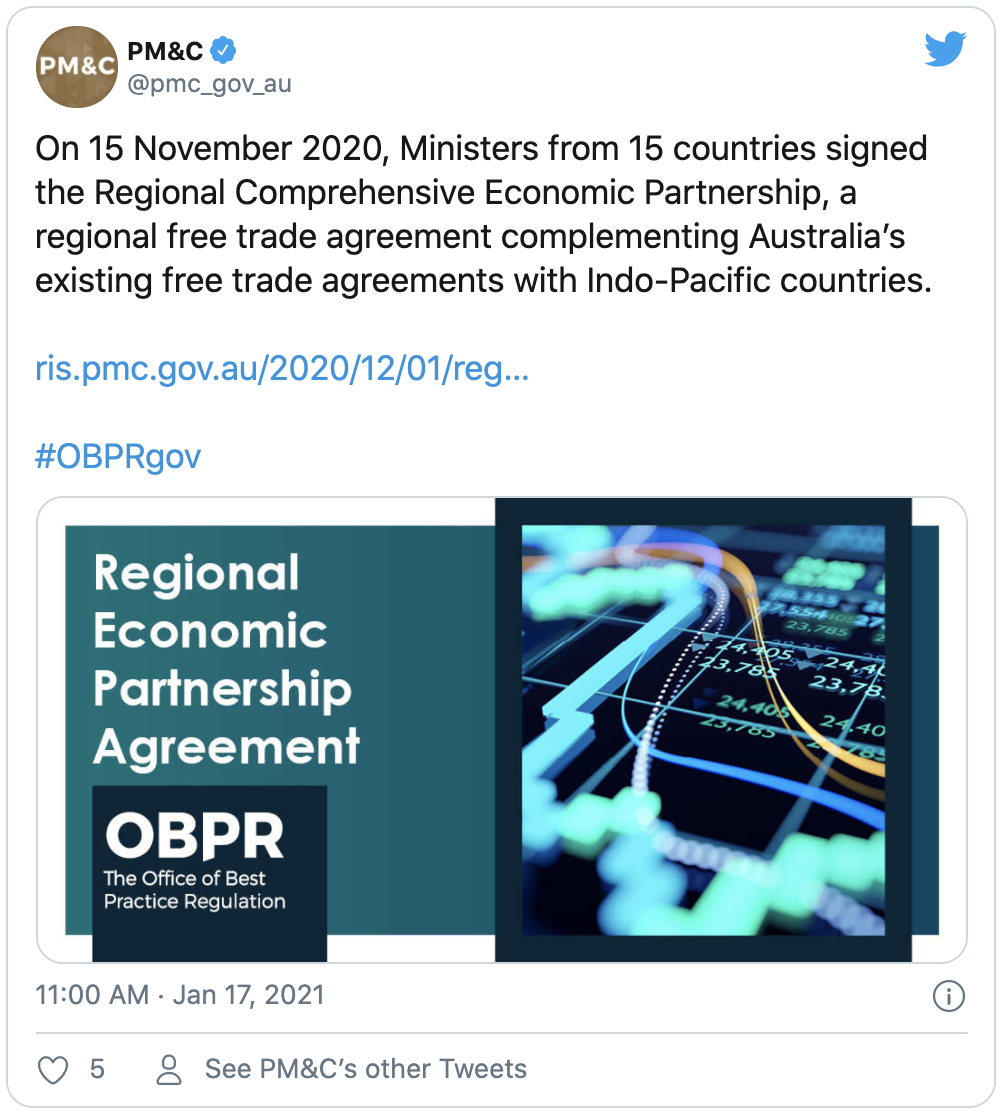 Trade diversification is not a real option

Apart from seeking opportunities for dialogue with Beijing, Tehan will also have to contend with unrealistic talk among colleagues about the need for Australia to diversify its markets. Diversification is desirable, but the constraints are real.

In a piece for the Australian Strategic Policy Institute, economics writer David Uren outlined the implications of the diversification argument.

Put simply, Australia has an asymmetrical trading relationship with China and its dependence on the Chinese market is virtually irreplaceable for the foreseeable future.

Australia also currently ships 100% of its nickel ore to China, and finding a replacement market for this commodity would likewise be difficult.

In the case of services, China accounts for 31% of Australia’s education exports, or A$12.7 billion. Chinese students represent more than our next four largest foreign markets combined.

Statements such as those by Deputy Prime Minister Michael McCormack that “we need China as much as China needs us” are not supported by the facts.

China’s economic importance to Australia can’t be overstated. Australian Bureau of Statistics numbers for financial year 2019-20 show the value of merchandise exports to the Chinese market totalled $150 billion, or three times that of the next largest export destination, Japan.

In that 12-month period, 39% of the dollar value of all goods exported by Australia went to China. This was up in percentage terms on the previous year.

However, the ABS numbers also underscore the uncomfortable detail that if it had not been for rocketing iron ore prices and thus an unhealthy dependence on a single commodity, overall Australia-China trade would have been down.

Reliance on iron ore and a drop in exports of other commodities on China’s list of sanctions and tariffs adds to pressures on the Australian government and its trade minister to get the trading relationship back on track.

An improving US-China relationship should help

The inauguration this week of President-elect Joe Biden in the US will restore a level of certainty in relations between Washington and Beijing.

Tensions on a whole range of issues, from China’s assertiveness in the South China Sea to its abuses of its Uyghur population to its flouting of agreements over Hong Kong’s autonomy, will persist. However, the arbitrariness of the Donald Trump years will recede.

This should provide opportunities for Australia to re-calibrate its own relationship with China. Canberra’s ties to an unpredictable Trump administration have been a drag on its ability to define a role for itself with China that is separate from the US.

Australia’s China relationship may be in crisis. However, in what may prove to be a more stable environment, it’s worth keeping in mind the Chinese word for crisis can also mean opportunity.