On average, one child is killed by a parent almost every fortnight in Australia.

Last week, three children — Claire, 7, Anna, 5, and Matthew, 3 — were included in this terrible number. Homicide investigators have formed the “preliminary view” that their mother, Katie Perinovic, was responsible for their deaths before killing herself. 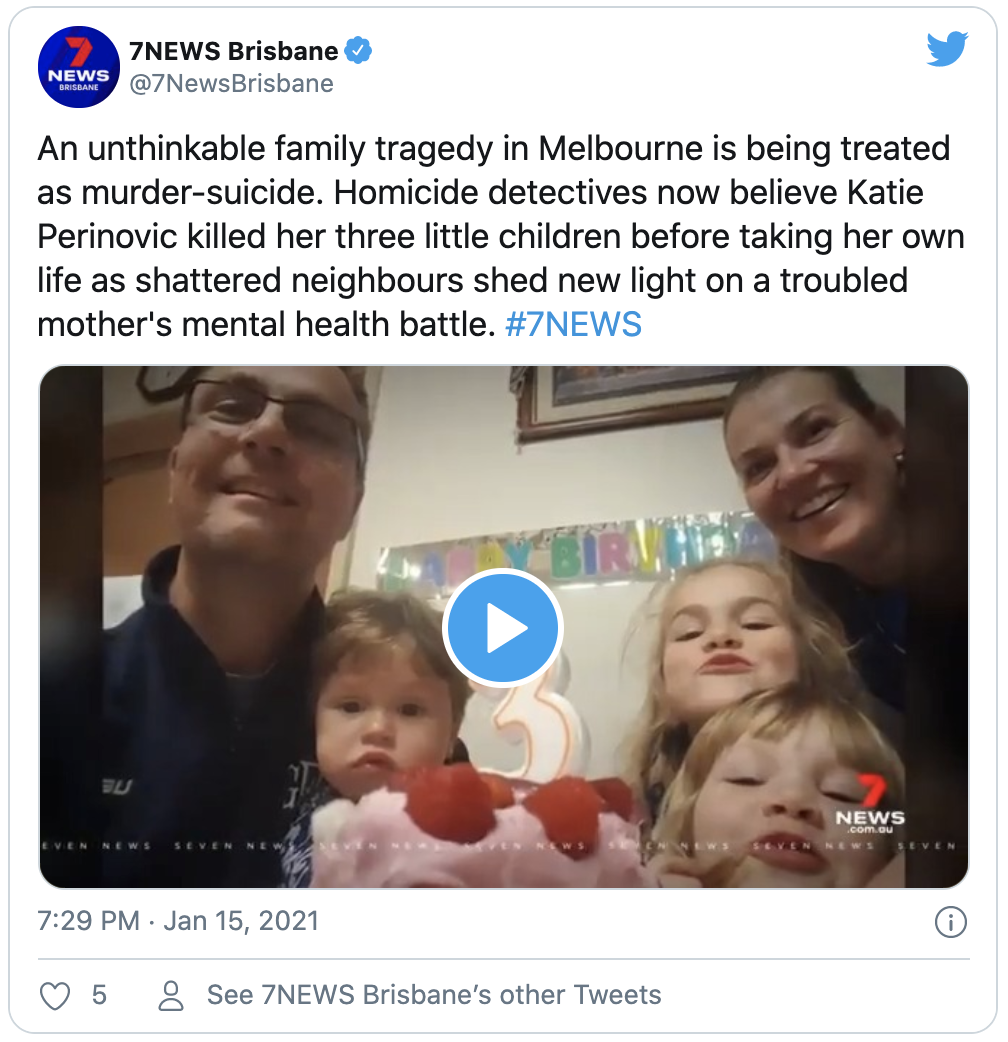 It was less than a year ago that Hannah Clarke and her children Aaliyah, Laianah and Trey were killed by their father, Rowan Baxter, who doused their car in petrol and set it alight. 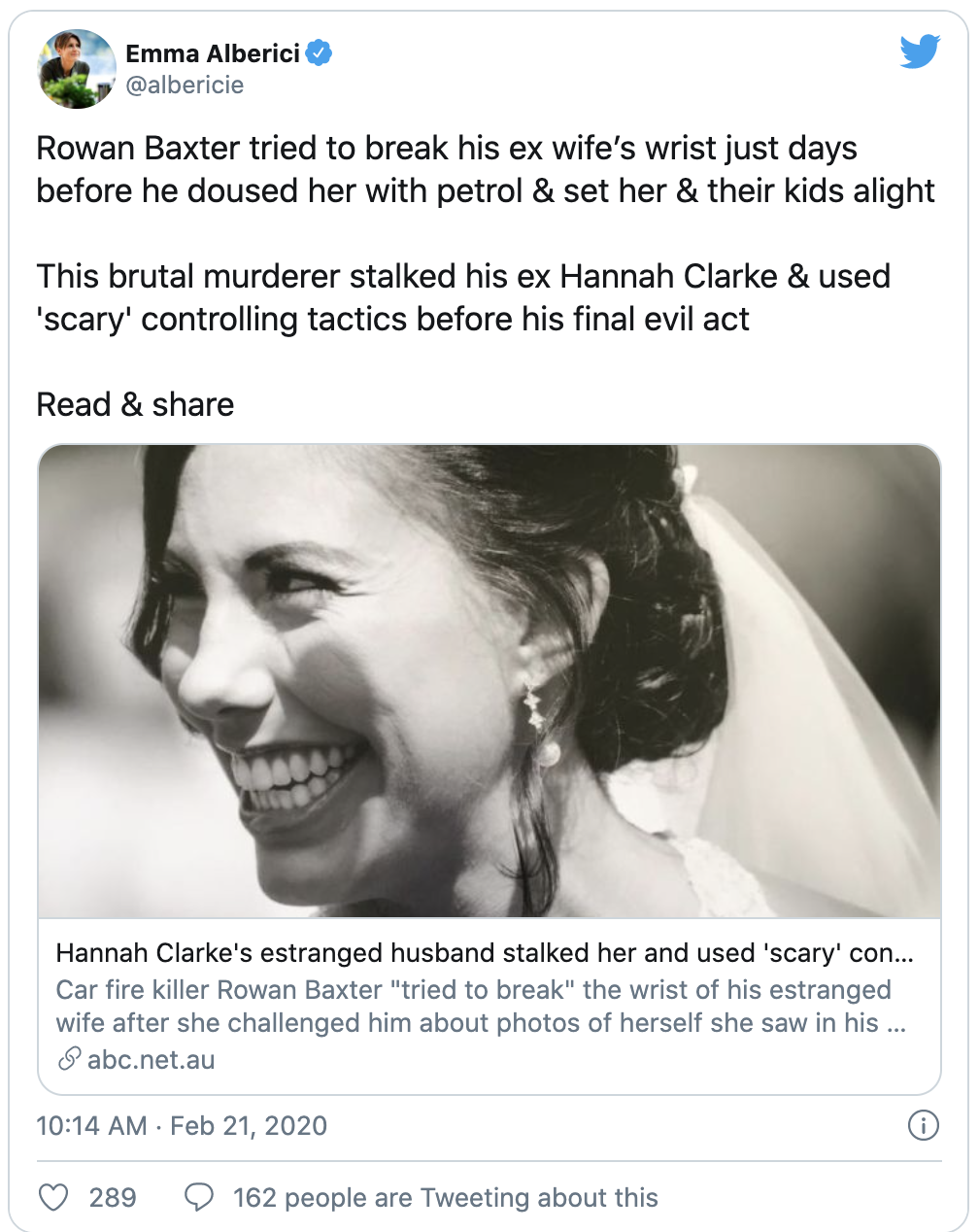 In 2019, Anthony Harvey was sentenced to life in prison in Perth for killing his small children Charlotte, Alice and Beatrix, his wife Mara and her mother Beverley.

Also that year, Charmaine McLeod is suspected to have deliberately caused the head-on collision in Queensland that killed her and her four young children, Aaleyn, Matilda, Wyatt and Zaidok.

How do we make sense of such unfathomable crimes, and what do we know about why they happen?

How many children are killed by parents in Australia?

Filicide is the murder of a child by a parent. Despite making up approximately 18% of all domestic homicides each year, precise data on the characteristics of filicide are difficult to establish due to the smaller numbers and varied cases.

However, one of the most recent comprehensive national filicide studies in Australia documented 238 cases between 2000 and 2012. This study mirrored trends elsewhere, with male and female perpetrators represented in roughly equal numbers.

How the media and public view filicide

On social media, some commentators on this latest case involving Katie Perinovic have been quick to criticise what is perceived as more sympathetic media coverage of women who kill their children. And for some, the fact women and men commit filicide in roughly equal numbers suggests that family violence has no gender.

But filicide is a relative outlier as a form of violence committed by women in relatively equal numbers to men.

Men commit almost all forms of violence at higher rates. And the most common form of domestic homicide — intimate partner homicide — is committed far more by men against women in the context of domestic violence.

Women who kill their children

Research indicates that gender does, in fact, play a role in the type of crime committed and the motivations behind it.

Accidental killings of children, for instance, are more likely to be the result of neglect among mothers and abuse among fathers and stepfathers. This reflects what we know about gender patterns in childcare responsibility and domestic and family violence.

In cases where children are killed intentionally, women are more likely to kill babies and newborns, particularly in circumstances of unwanted pregnancies. Such offenders are more likely to be young and have low levels of social support, although it is increasingly reported among older women.

Mothers are also more likely to kill their children during a psychotic episode.

For example, in 2017, a court found Raina Thaiday of Queensland, who killed her seven children and niece, had been experiencing a severe psychotic episode linked to schizophrenia triggered by long-term cannabis use. The court ruled she could not be found criminally responsible for her actions. 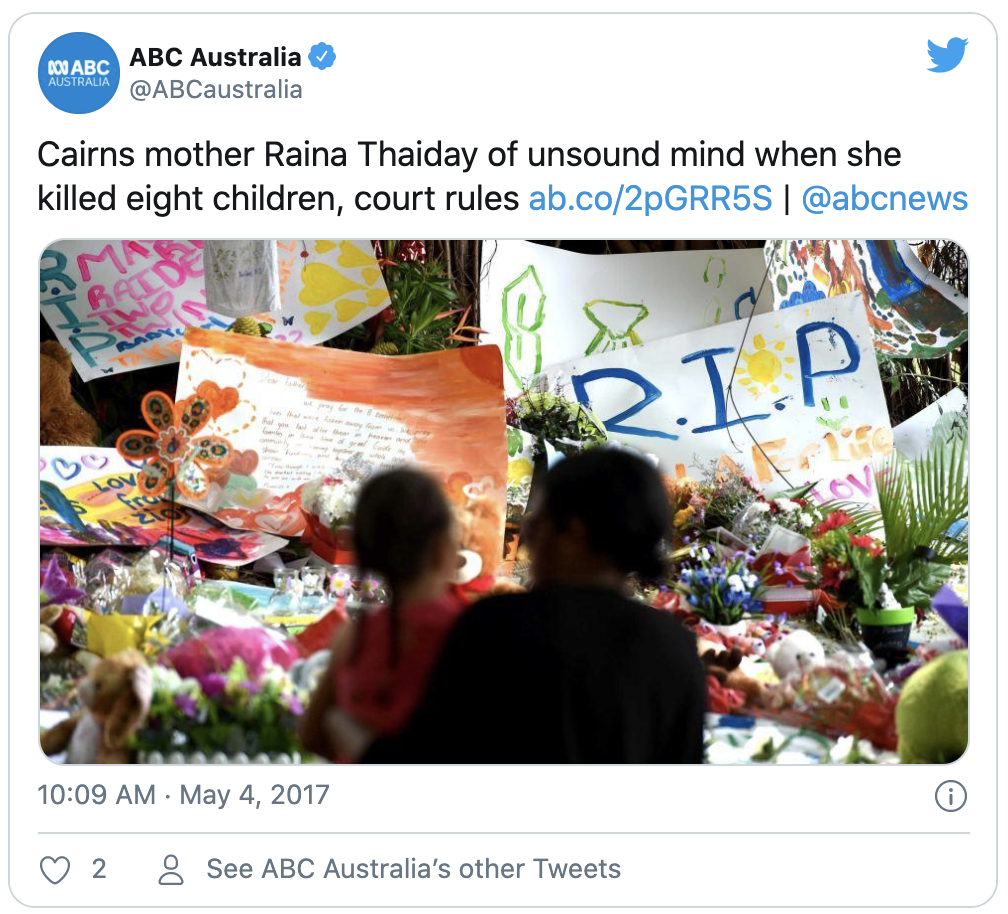 Women are also more likely to kill children out of a warped belief they are sparing them pain – for instance, of losing a parent to suicide.

When John Edwards shot his teenage children, Jennifer and Jack, in Sydney in 2018, his actions followed a history of domestic abuse and separation, and ended in his ex-partner Olga’s death by suicide five months later. A senior police source called her death a “slow murder”.

And familicide, in which both a partner and children are killed, is committed almost exclusively by men. Researchers suggest this indicates that men are more likely to have proprietary attitudes to both women and children, and women primarily towards children.

While gender patterns around filicide are important to research in order to understand why these crimes happen, not all cases fit neatly into these boxes. Mental illness is often a common interacting factor in both maternal and paternal filicide, and the causes are often complex and multiple.

When a parent kills, the focus is often on the mindset of the perpetrator rather than the children.

In my ongoing research into media coverage of family murder-suicide cases, I have observed a notable silence around the lives of children and how they experienced violence. It is an uncomfortable topic, but we need to keep children at the centre of these discussions.

While some parents who kill may indeed have been loving parents, the act of filicide should never be framed as an act of love. It is never excusable. As such, many researchers are uncomfortable with the term “altruistic” filicide, which places the emphasis on the parent’s experiences, rather than the child’s.

We also need to address the cultural beliefs that children belong to their parents. This attitude that children are “property” contributes to filicide.

More comprehensive research and consistent data are key starting points. The Monash Deakin Filicide Research Hub is an excellent example of collaboration towards this goal. The Australian Domestic Violence Death Review Network is also working to produce a data-set on filicide in the context of domestic and family violence.

Greater collaboration between support service providers is also important. We need to recognise how issues affecting parents, such as mental illness or domestic violence, can have important consequences for children.

We also need to keep the best interests of children front and centre, rather than viewing them as mere witnesses to family conflict.

Denise Buiten is a senior lecturer in Social Justice and Sociology, University of Notre Dame Australia.