Following a preliminary investigations and a request by then-shadow energy minister Mark Butler that referenced Shine Energy’s feasibility study, ANAO’s review of the SREI Program last week found Shine Energy was awarded the grant despite only “partially meeting” selection criteria per Commonwealth Grants Rules and Guidelines, including a departmental assessment finding significant risk of the company not completing the study. The ANAO report further details probity, conflict of interest and due diligence failures by the department.

Today, The Mandarin provides a comprehensive overview of the report and, more broadly, what it says about the politics and economics of coal in Australia.

Announced on 26 March 2019 by the Morrison government as a $10 million, two-year program, the SREI program was designed to provide funding for a bankable feasibility study of a proposed coal plant in Collinsville — which, as Guardian Australia reported last year, was controversially announced for Shine Energy two days before the company was asked to officially apply on February 10, 2020.

The program was also meant to fund procurement of a strategic study to examine northern and central Queensland’s current and future energy needs and a series of ad hoc, non-competitive grants to support feasibility studies and business cases for generation or new energy infrastructure projects identified through the strategic study. Additionally, in approving the design, Taylor requested the department “investigate options for electrification of Curtis Island LNG terminals”.

Program funding was included in the April 2019 budget, and was identified in the 2019 election policy platforms for both the Liberal Party and the National Party. Administered by the Department of Industry, Science, Energy and Resources, the program is separate but complementary to the Underwriting New Generation Investments Program.

In its investigation, the ANAO finds that the department’s funding recommendations briefings clearly demonstrated that Shine’s application only met 71% of criteria — with failed criteria relating to time-frame and funding eligibility — while a separate application by Blue Hydro, which received $2 million, met all criteria.

The department, ANAO notes, concluded that Shine’s application would not result in a bankable feasibility study being produced by 30 June 2021 that enables a final investment decision on the construction of an (somewhat misnamed) “high energy low emissions plant”. But the company nonetheless received funding related to the first two (of four) stages of a feasibility study, with funding sources for the remaining stages were not identified as Shine Energy admitted it may not have enough funds to complete the study without additional contributions from government or private bodies, and completion of the study is not due until February 2023.

Additionally, while the application was found not to properly use commonwealth resources, the the department shrank the potential $4 million grant by $694,440 to exclude “ineligible” expenditure related to phone, printing etc. 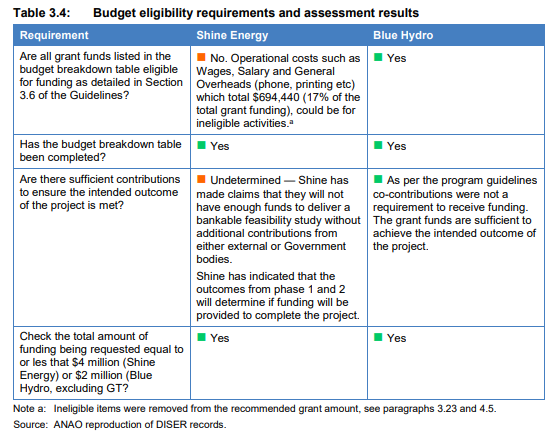 On the department’s end, the Auditor-General finds due diligence on the grant applications was incomplete and not up to date for the Shine Energy grant, which was undertaken a full nine months before Shine’s application was received. In both Shine Energy and Blue Hydro’s case, checks were found to not be comprehensive.

Appropriate arrangements were also not in place to manage probity risks, namely: 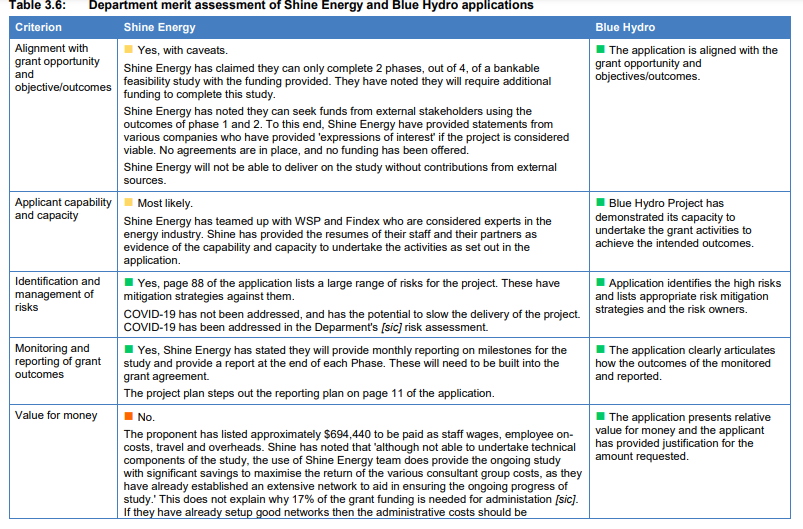 Three recommendations have now been made addressing program design, managing probity risks and improvements to due diligence activities, all of which have been agreed to by the department:

Funding for Shine’s feasibility study was developed and approved against the backdrop of two important trends: a lack of sector interest or need for a new coal-fired power plant in north Queensland, and a political interest in building one, namely substantial pressure from National and LNP politicians for a new plant in Collinsville and passive support from Scott Morrison.

As commentator and former public servant Bernard Keane outlined at Crikey on Friday, Minister for Energy and Emissions Reduction Angus Talor made an unsourced claim in announcing the SREI projects in February 2020, namely that “an independent strategic study has identified system strength is a real concern in central and north Queensland, and new synchronous generation is a priority to meet the energy needs of customers in the region.” Taylor has yet to respond to requests for said study.

Shine, notably, launched as a renewables company in 2016, shortly pivoted to coal, but has yet to build anything. The company also claims to be a “traditional owner company” but Guardian Australia notes that local Birriah representatives have accused the company of using Indigenous connections as a “smokescreen”.

The company also listed Glencore as a partner in a separate application for the Collinsville proposal, while RenewEconomy notes several senior management connections with the Katter Australia Party i.e. CEO Ashley Dodd, executive team member Les Muckan, and former company director Luke Shaw all either previously standing as election candidates and/or being involved in the running of Katter’s election campaigns.

In its analysis of due diligence, ANAO notes that not only did Shine not apply before receiving the ad hoc grant or subsequently fail selection criteria, the company’s proposal did not win out in the SNEI’s separate function, the creation of “a strategic study to examine northern and central Queensland’s current and future energy needs”.

While Taylor proposed to Scott Morrison on August 7, 2019 that a grant be awarded to Shine Energy, the Prime Minister’s 13 September 2019 response required that the (non-binding) strategic study be completed before any grants were considered; the study’s Phase 1 findings, at just 22% engagement with total stakeholders at 18 December 2019, showed Shine’s proposal ranked behind three projects (including Blue Hydro) and equal with two others in a categorisation of identified synchronous projects.

These findings were prepared and submitted for Taylor, along with a recommendation to seek approval for an ad hoc grant to Shine, but in August 2020 the department advised the ANAO that the “brief was never considered by the minster and was overtaken by a subsequent briefing”. 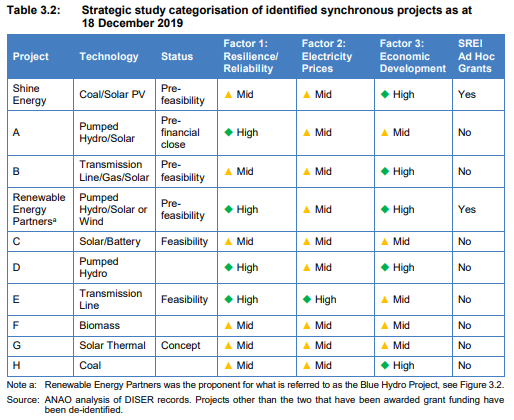 Finally, the ANAO finds that Taylor uses private email accounts for work, namely Gmail and MSN accounts, and that the department warned Taylor and his staff to comply with the commonwealth’s IT security policies; in its coverage of the report, RenewEconomy also notes correspondence sent by Shine to a departmental official “was forwarded to a non-government email account of their spouse.”

The ANAO report follows a series of significant the latest in significant findings by the ANAO — “sports rort”, the Leppington Triangle, The EPBC Act — and a warning last month from Auditor-General Grant Hehir that the office will need to reduce the number of performance audits it conducts each year without renewed funding; 2020 analysis by the Centre for Public Integrity found that ANAO funding has been cut by $23.7 million in real terms since 2016-17.

The death of Yallourn, coal-fired power is inevitable, yet the government still has no plan to help its workforce