With the recovery from the pandemic well underway, wage stagnation is returning as the biggest economic problem in Australia — a situation that has applied for most of the past decade.

What’s different now is that the government has specifically linked its fiscal policy to increasing wages growth, for the first time. Treasurer Josh Frydenberg, in announcing his fiscal reverse ferret on April 29 — in which planned cuts to spending as a result of unemployment falling well below 6% would be replaced with continued fiscal stimulus — justified it this way:

“Monetary policy is heavily constrained. Unlike prior to the crisis, the Reserve Bank has reduced scope to lower interest rates to drive unemployment lower and wages higher.  This has placed more of the burden on fiscal policy.

And estimates of the ‘NAIRU’ or the rate of unemployment below which inflation is expected to accelerate over time, have come down… [to estimates of] between 4.5 and 5% …

We want more people in jobs and in better paying jobs. This is what our fiscal strategy is designed to achieve.”

This is welcome change from the government, which for years has been in denial about wages growth — indeed, the federal government has been one of the key impediments to better wages growth, through its policy of suppressing public sector wages, opposing or failing to support minimum wage rises, backing penalty rate cuts and pushing industrial relations reforms that would have reduced protections for wages and conditions.

The denialism has been on consistent display in the budget papers. Year in, year out, the wages growth forecasts have been too optimistic — in some cases, the stuff of fantasy.

This chart shows the forecasts for the Wage Price Index each year — not in the Budget papers, but in the subsequent MYEFO. It’s one thing to get a wages forecast made in March of the previous year wrong — a lot can change in the intervening 15 months after the budget papers. But since coming to office, the government, and its Treasury forecasts, haven’t even been able to get right forecasts made in MYEFO — nearly halfway through the relevant year. 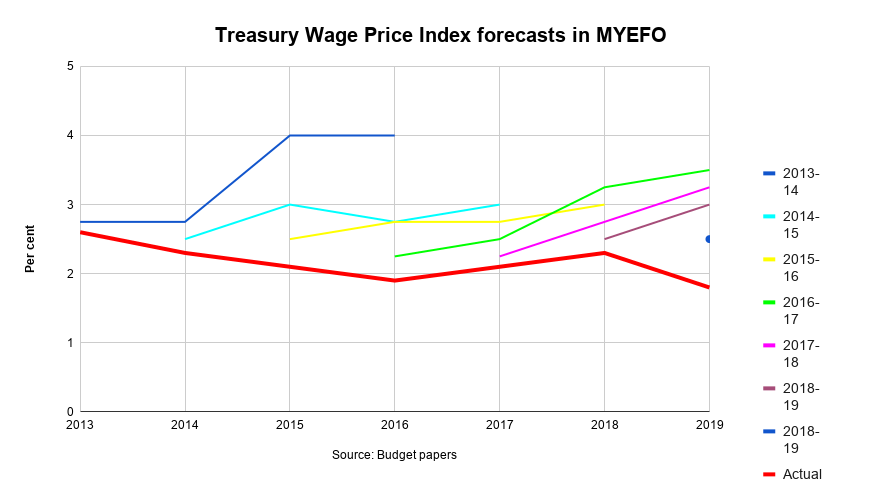 And Treasury’s forecasts across the forward estimates were always ridiculously optimistic. Consider 2017: when Treasury first made a forecast for wages growth in 2017-18, back in 2014-15, they must have thought they were being sensible in cutting back from the 4% figure they had previously used for out-years. Next year, they prudently reduced the 2017 forecast to 2.75%. In 2016, with the relevant year starting little more than six months away, they cut it back to 2.5%. And then, in December 2017, they cut their own budget forecast of six months earlier down to 2.25% for that financial year.

So anything Treasury has to say about wages growth is best considered with extreme scepticism. But for now fiscal policy will be explicitly based on a measure they have been hopeless at forecasting.

To be fair, the Reserve Bank, which has none of Treasury’s political constraints, has a similarly dodgy forecast record — something the bank’s economists readily acknowledged in a 2017 paper, when they examined the issue of low wages growth in Australia. Nor was that the first the RBA had pondered the issue: in 2015, two RBA economists pondered Why Is Wages Growth So Low. In 2019, deputy governor Guy Debelle devoted most of an entire speech to the issue — but which time the bank had conducted a two-day conference on the subject.

By then, too, Governor Philip Lowe was routinely mentioning low wages growth in his speeches and urging higher wages outcomes. He also began referring to the use of fiscal stimulus to drive employment growth, particularly through borrowing to invest in infrastructure. Even before the RBA cut rates in June 2019, Lowe was talking about how to drive unemployment lower including by fiscal stimulus, noting “monetary policy certainly can help, and it is helping, but there are certain downsides from relying too much on monetary policy.”

Wages growth is firmly at the heart of monetary policy, for months with the RBA repeatedly stating that there will be no tightening of monetary policy until inflation is sustainably within its target band of 2-3%, which will require much lower unemployment to drive wages growth up.

So, nearly two years on, the government has finally caught up with the Reserve Bank: fiscal policy will also aim at wages growth.

But will that be enough? To get unemployment down to 4.5% will need an extra 160,000 jobs created on top of the jobs needed for a naturally expanding workforce, and before any increases in the participation rate (female participation has been the great achievement of the Coalition’s economic record). But the Reserve Bank not only thinks it can be reached, but that is now forecasting that it will be reached by the end of next year.

Unfortunately, the Bank doesn’t think that will be enough to put sustained pressure on wages growth sufficient to push inflation up — its estimate of NAIRU seems to be lower than Treasury’s.

The problem for policymakers is that economists remain at odds over what’s driving low wages growth. Low productivity growth, globalisation, technological change and the decline of unions have all been identified as possible drivers. Lowe himself identified government suppression of public sector wages as a contributor. For some time, the RBA decided that excess labour market capacity — and a lower than previously estimated level of NAIRU — was a key factor. Treasury made an entirely useless contribution to the debate in 2019 with a paper suggesting that if only workers went out and found higher-paying jobs, wages growth would be higher — even though the Productivity Commission examined the idea and found it unconvincing.

If the real cause of wage stagnation is a permanent shift of bargaining power in favour of employers and against workers — through, for example, factors like casualisation and the gig economy, larger corporations with more power in labour markets, a strong supply of temporary migrant workers, and restrictive pro-employer industrial relations regulation — then even strong employment growth is unlikely to be enough to push wages growth up to the levels the RBA wants it at.

In which case, how committed are people in Canberra to delivering a policy environment that really does enable wages growth?