Millions of kidnapped children are imprisoned in underground tunnels, being sexually abused and tortured by a shadowy global cabal of paedophiles.

That, at least, is some of the misinformation about child sex trafficking being spread on social media. You’ll also see such ideas being promoted at protests from Los Angeles to London, with hashtags such as #saveourchildren and #endchildtrafficking emblazoned on shirts and placards.

The thought of a child being abused, exploited or trafficked for sex elicits a powerful emotional response. These lurid tales have proven to be a potent gateway for mothers (and others) to “go down the rabbithole”.

The tragedy is that misinformation is turning well-intentioned people into “digital soldiers” unwittingly working against genuine efforts to eliminate child sexual abuse and human trafficking.

Let’s try to untangle the misconceptions.

The truth about child sexual abuse

Statistics on child sexual abuse are never exact. Less than 40% of victims report being abused when children. The average time before disclosure, according to Australia’s Royal Commission into Institutional Responses to Child Sexual Abuse, is about 20 years for women and 25 years for men. Some never disclose.

There are enough robust studies, however, to suggest about one in ten children are sexually abused before age 18 – one in seven girls (14%) and one in 25 boys (4%).

Most typically the abuser is an adult known and trusted by the child and their parents. Then by a non-biological relative or in-law. In fewer than 15% of cases is the perpetrator a stranger.

The differences between these findings are most likely due to greater awareness reducing opportunities for abuse by “acquaintances” such as clergy, teachers and coaches. In the 2000 data, to illustrate, 69% of molested boys were abused by an acquaintance; in the 2016 data it was about 47%.

Media coverage tends to distort understanding of child sexual abuse. It focuses on “stranger danger” and amplifies the threat of children being molested at the park or shopping centre.

Even more intense coverage goes to the rarer cases where children are abducted or murdered. Think of the fascination with cases such as the 2007 disappearance of three-year-old Madeleine McCann. But such cases are memorable because they are so rare.

The so-called “Pastel-Q” conspiracy theory, however, asserts millions of children a year are being kidnapped and trafficked for sex. 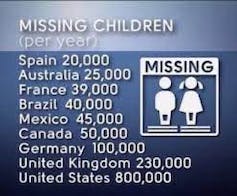 This claim rests on misrepresented numbers from missing persons reports. In the case of the US, for example, the claim is that 800,000 children disappear each year. (A similar rate applied globally would mean about 19 million children disappear every year.)In fact, the FBI’s data shows the number of people under the age of 17 reported missing in the US in 2020 was about 365,000. In most cases (based on several decades’ of data) these missing reports involve a child running away from home or being taken by a custodial parent. Almost half are found within three hours, and more than 99% are found alive. Since 2010, in the US fewer than 350 people a year under the age of 21 have been abducted by strangers.

So no, there’s no evidence millions of children in wealthy nations are being kidnapped by paedophiles.

This is not to say child sex trafficking isn’t a serious concern. But it is a different problem to the Pastel-Q portrayal.

“the recruitment, transportation, transfer, harbouring or receipt of persons, by means of the threat or use of force or other forms of coercion, of abduction, of fraud, of deception, of the abuse of power or of a position of vulnerability or of the giving or receiving of payments or benefits to achieve the consent of a person having control over another person, for the purpose of exploitation”

This means human trafficking doesn’t necessarily require moving a person from one place to another, in the way we think of weapons and drugs being trafficked. It’s not the same as people smuggling. Nor is it exactly the same as modern slavery, although there is broad crossover in definitions.

The crucial point of trafficking is the abuse of power to exploit another human being. It thrives in conditions of poverty, economic and gender inequality, corruption and instability. It requires systemic solutions, which the cartoonish constructions of Pastel-Q distract attention from.

Accurately estimating the true scale of child sex trafficking is, like child sexual abuse, complicated. There is the hidden nature of these crimes, differences in policing and reporting between nations, and little uniformity in how statistics are compiled.

The United Nations’ Global Report on Trafficking in Persons only reports on “detected” cases. There are no more than 25,000 cases each year.

But researchers have good reasons to believe this is just the tip of the iceberg. The most commonly accepted estimates of the true number of trafficking victims in the world is about 21 million. About 16 million have been trafficked for labour; about 3 million of these are aged under 18.

About 5 million are trafficked for sex – most typically by being coerced into sex work. More than 99% of sex-trafficking victims are women. More than 70% are in Asia, followed by Europe and Central Asia (14%), Africa (8%), the Americas (4%), and the Arab States (1%). About a million are aged under 18.

We must be cautious about these total estimates. Nonetheless there is sufficient research to be confident only a very small percentage of cases involve scenarios like that in the movie Taken, where Liam Neeson’s character uses his “very particular set of skills” to rescue his kidnapped 17-year-old American daughter from sex slavery.

More often, traffickers approach families living in poverty or socially and economically vulnerable girls – such as runaways – offering false promises of affection, work and a better life. Instead the girls find themselves being pressured or coerced into sex work.

This was the case with the victims of Jeffrey Epstein, whose intermediaries lured girls aged 14 to 18 with cash to perform massages, then nude massages, then sex.

How do we address child trafficking?

Child sexual abuse and child sex trafficking are both serious global problems. We should all be concerned about them.

But they can’t be divorced from the broader conditions that allow many more millions of children and adults to be trafficked and exploited as modern slaves.

They require sophisticated, holistic and broad-based legal and policy responses.
They will not be tackled by misunderstanding their reality and complexity, and indulging in false narratives that divert attention from the real issues.

Which is why more than 130 anti-trafficking organisations have said anybody who lends credibility to these false claims “actively harms the fight against human trafficking”.