According to an international benchmark developed by the health department, Australia’s vaccination rate fell two places in June, and the country is now trailing third-last compared with other nations who were at ‘equivalent stages of rollout’.

Using the commonwealth health department’s own international benchmark, the Provocate consultancy has determined that Australia’s rank slipped from fifth place in April, to 10th place in May, and 12th place in June.

The new rankings put the COVID-19 vaccination programs of countries such as South Korea and Japan ahead of Australia.

“Australia is failing against the federal department of health’s own global measure of success,” Bilsborough said.

“The world’s reopening while Australia’s locking down. That’s not good for business in anyone’s books,” he added. 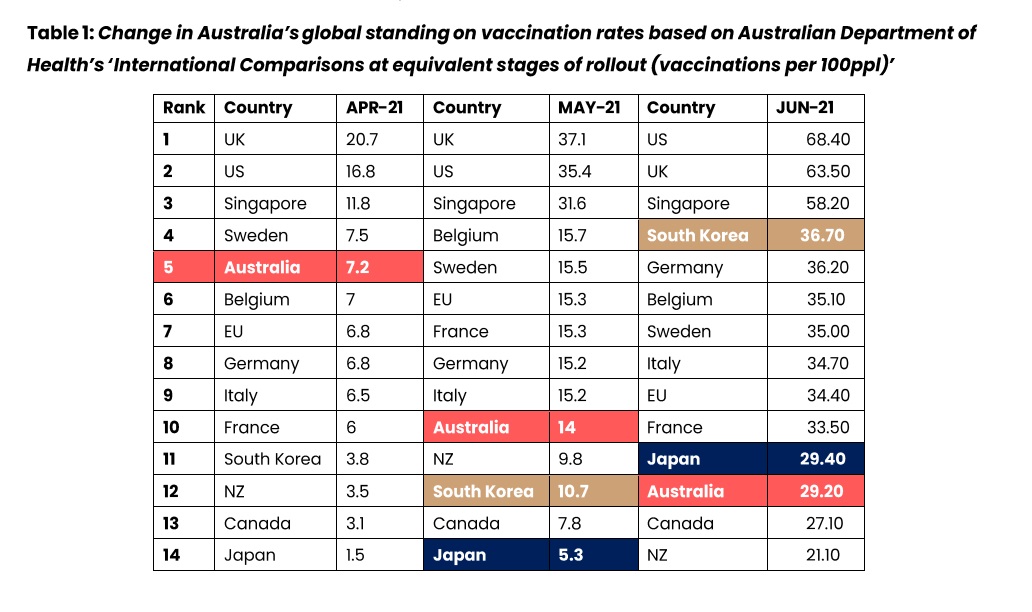 Bilsborough, who has previously served as a senior advisor to a former federal minister for health and aged care, said that he was concerned that a looming federal election (which has not yet been announced) risked holding the Australian economy ‘hostage to political Russian roulette’ until new supplies of the Pfizer vaccine arrived in October.

In April, when Australia was sitting in fifth position on the benchmarking list, prime minister Scott Morrison had announced the trans-Tasman travel agreement with New Zealand.

Since then, Provocate has tracked other countries such as Germany, France, Italy, Belgium, the EU (as well as South Korea and Japan) overtaking Australia’s COVID-19 vaccine efforts.

The COVID-19 vaccine programs of New Zealand and Canada remain behind Australia’s, however Provocate predicts that Canada’s rollout is likely to overtake the Oceania countries ‘within weeks’.

Bilsborough welcomed last week’s announcement from the PM that an official herd immunity target would be set by the National Cabinet. He said he waited with interest to see what percentage of community vaccination the government would set to achieve the threshold given the difference in approximately 13 million jabs in arms between achieving the highest (95% HI) and lowest (70% HI) rates of herd immunity.