The public sector is too risk-averse, it’s often said. And no state quite like New South Wales.

In its quarterly assessment of government risk, research and advisory firm Political Risk says that’s a good thing. NSW has the lowest risk score thanks to an improving budget position — despite the ructions at Macquarie Street which have seen ex-premier Barry O’Farrell and other MPs caught up in corruption scandals. 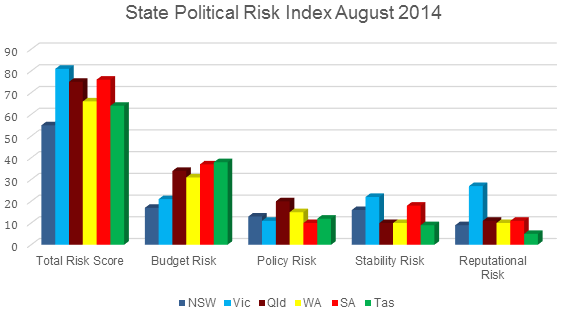 Political Risk says its matrix of measurements — across budget, policy, stability and reputational risk — “allows observers to assess political risk across a number of categories for each state and relative to other states”:

“Australian state and territory governments are the front line public sector institutions with broad responsibility for service provision, project investment and delivery, legislative frameworks and operational regulation within the Commonwealth of Australia. With this wide reaching authority across legislation, regulations, investment and direct revenue raising and as a major customer for a vast range of suppliers, political risk at a state government level can have a profound impact on many aspects of everyday decision making for parties outside of government.”

NSW was rated ahead of Victoria on the budget measure. But Victoria was judged to have the highest political risk of any state due to instability around the November election. The chances of a new government — Labor leads Denis Napthine’s administration in polling — creates “significant uncertainty and doubt”.

The new Liberal-led government in Tasmania has generated renewed confidence, now leading measures on stability and reputational risk. But ongoing budget uncertainty puts the Apple Isle atop that list.

“With the government’s existing tendency towards reactionary and populist policy, it is a concern if the poor polling results in further unpredictability of policy (and Queensland has the highest policy risk for the index this month). These dynamics are unlikely to translate through to a change of government at the 2015 election (not the least of which is the massive number of seats the Labor opposition needs to win) but the uncertainty manifests in current decision making by the Campbell government.”